Animals with separate teats rather than udders

City boy here. I saw a photo today of a nursing sow (it should be hereif NPR doesn’t change the photo). Piglets are suckling, and some of the teats are unattended at least at the moment. Some of the areas behind the teats seem more full than others. So a city boy has questions.

Is there one “container” in the sow for all the sow’s milk, or does each teat draw from a separate one? What happens if there aren’t enough piglets to take all the milk? Does the sow experience discomfort? Does the milk shift from one area that is not being sucked on to another that is? Does the milk get re-absorbed or excreted later by the sow? Is it saved up and less milk is produced until it is all gone? Any pig farmers here to answer these pressing questions?

No full answers to your questions, but mammary glands are modified sweat glands, and as far as I know no mammals have any ducts or reservoirs interconnecting them–not even those with udders. And there seem to be* different behaviors with “nipple preference” with different species, but if there are more nipples than nipplers, there could still be enough rotation going on that none are going completely unused unless the litter is unusually small.

*(How could I avoid linking an article with the line “Wow. That dog has really large nipples. And they’re on that cake.”)

On (most) mammals, every teat is a duct with its own reservoir. If the milk is not removed (via nursing or milking), that reservoir fills, overfills, gets hot and uncomfortable, and then the milk is resorbed and lactation ceases in that teat.

Animals produce milk with a gradual increase, peak, and gradual decrease which reflects the needs of the growing young. If there is a abrupt cut off of nursing or milking, at or around peak lactation, an infection might result (mastitis) which if not treated may cause scarring or even the loss of use of that teat permanently.

I’m sure it varies, but for those animals I’m most familiar with, often there are favored teats especially if the birth group is smaller than normal, and at least for that lactation the other teat or teats dry up.

In large-litter animals, the back teats tend to have more milk. Also, when one teat is emptied the young will move to a different one if they’re still hungry. That might explain the difference in size you saw.

I just read it today on Wikipedia. It seems the more anterior teats produce more milk. Piglets establish a pecking order pretty early. Even though there’s not an interior reservoir for milk, biology just works that way. Just about every mammalian gland works pretty much the same way. We have reservoirs for some things that you can see in our anatomy, but we can produce copious amounts of fluid from thin ducts lined by millions of cells that happen to be well supplied with capillaries. Everything has been asked here at times – how do we make so much … stomach acid, snot, seminal fluid from a solid prostate, female ejaculate, whatever … when there isn’t a bladder or vesicle nearby to hold it. Its just how it happens to make something that’s mostly water on the fly from cells that line the duct.

Huh. Wikipedia got it wrong. Posterior not anterior teats. Thanks country girl. Anyway, even though they don’t share a common reservoir, some produce more because of biology. Not becuse the central reservoir ran dry.

To “suck hind tit” is an old idiom that means to be disadvantaged or in a weak position.

And nobody’s mentioned the most obvious example of a mammal with separate teats, which usually has fewer young than there are nipples? Well, obvious to me, at least, and I would have thought to about half of the population of the Dope.

Chonos, yes, obvious to me too, but to many people the human female mammary glands are not at all associated with their primary purpose of feeding the young. In our culture where everything is sexualized, many look at breasts as only for sexual pleasure and nothing else. Incredibly, there are even men who don’t want their female partners to breastfeed because they don’t want to share “their” breasts with the baby.

I breastfed my 2 kids and so did a number of my friends. This was 15-20 years ago, and I hope things have improved a little, but all of us got some kind of comment about breastfeeding not being “normal”, bottlefeeding being simpler, easier, more sanitary, and were told a number of times that it wasn’t “right” to breastfeed and “it doesn’t really work” so why bother, why not just give the kid a bottle.

A friend of mine had to pump her breastmilk when she went back to work when her baby was 3 months old. Some of the ignorant and hostile comments she got were unbelievable. Worst of all was another woman who took to calling “moo moo here comes mama cow” whenever my friend and she met. Just one example that shows that too many people think that it’s a cow’s role and not a human mother’s role to produce milk.

Here’s a story about the ad campaign “Human Milk, Tailor Made for Tiny Humans” which highlights all of its incredible benefits in terms of hormones, stem cells, enzymes etc. This quote is interesting too:* “We were all feeding infants over the age of one, and many of us were getting criticism for it, poor advice, and little help. At that time I was completely new to breastfeeding, and had no idea how many of us were in that position, or that poor advice and [lack of] support were common for mothers with infants of all ages, in many different countries.”* 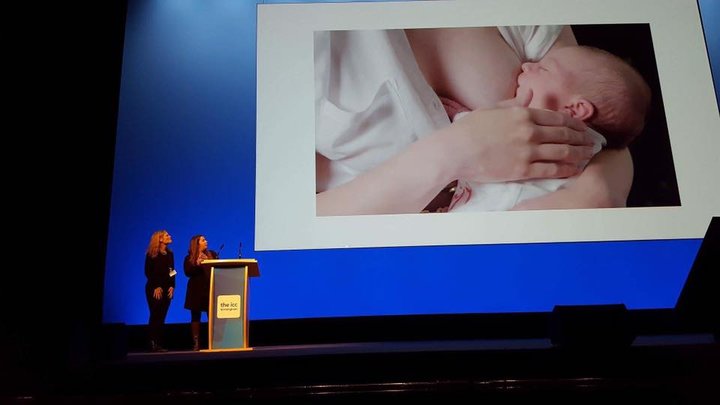 Human Milk, Tailor Made for Tiny Humans. The Story Behind the Ad. • KellyMom.com

‘Human Milk. Tailor-Made for Tiny Humans’ is a breastfeeding ad with a powerful message that resonates strongly with many mothers. When I learned the video was made by a group of parents who volunteered their time and money, I asked Claire...

And nobody’s mentioned the most obvious example of a mammal with separate teats, which usually has fewer young than there are nipples?

Also, boars have tits, as noted casually by many Americans, as well as evolutionary scientists who find that even more interesting than a statement about uselessness.

Also, boars have tits, as noted casually by many Americans, as well as evolutionary scientists who find that even more interesting than a statement about uselessness.

I’ve never heard any saying about boar tits before, but apparently it is quite inaccurate if this post is accurate.

I think that Chronos was alluding to the Thala-siren.

As a city boy who had to learn to hand-milk at the age of 8 in the 50s, I will fill in the obvious blanks and add a twist:

When you hand-milk, you alternate between the teats, making sure that you get as much milk as possible from each. (You don’t switch frequently, but you get used to a pattern that gives every teat its chance.)

My grandfather lost his right arm in a coal-mining accident in 1915. After a few more years doing odd work in the mines, he started a dairy farm. Later, he worked as a prison guard and janitor. One of the compliments that other farmers paid him was the statement that he could milk a cow faster with one hand than anybody else with two. He went around in a clockwise direction and I can attest that he was quick about it. Afterwards, he would hang the milk pail on his hook, pick up the stool with his good hand, and saunter off. (At this point in his life, he only had a few cows and didn’t see any reason to keep a milking machine when he could take care of things by hand.)

I did ask one day why we don’t milk pigs (sows). He said, “You wouldn’t like it.” I had no idea exactly what he meant and tried not to think too much about it.

Don’t be silly. He was thinking of chimpanzees.

And nobody’s mentioned the most obvious example of a mammal with separate teats, which usually has fewer young than there are nipples? Well, obvious to me, at least, and I would have thought to about half of the population of the Dope.

I did think of this, but being human I presumed the mother has the option of switching the baby from one side to the other as appropriate. I also had the impression (not derived from any personal or practical experience) that one human baby would consume all or most of the milk from both breasts. Perhaps I just assumed that because 1 baby for 2 breasts is the most common configuration.

Anyway, Ulfreida answered my questions. I knew it would take a country-raised person. I confess myself still confused by the point that Fear Itself raised, about “sucking hind tit,” and I remember that my father, at least partially a country boy, used that expression himself. I suppose this could be another case where the popular wisdom represented by such an expression was just wrong.