This one is in Palencia, Spain (A lot of these botched restorations seem to come from Spain – se the NPR article). It apparently was done quite a while ago, but is currently trending online

It’s inevitably being compared to Mr. Potato Head. Not favorably 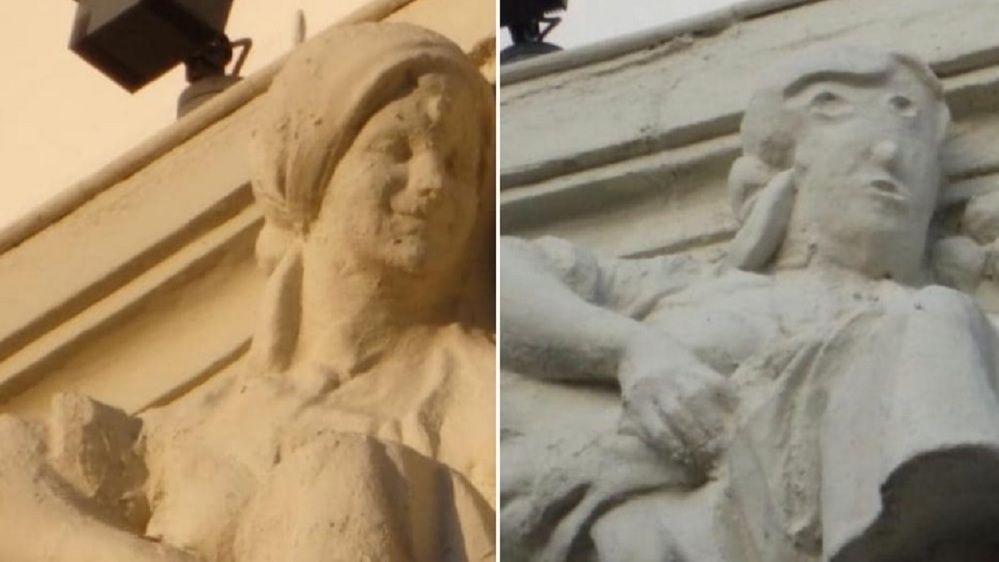 Behold The 'Potato Head' Of Palencia, Another Botched Art Restoration In Spain

The statue was once of a smiling woman in a pastoral scene. Now, it looks more like a melted candle with some gouged holes. Professional art restorers in Spain are calling for stricter oversight.

Botched restoration of Spanish statue turns it into ‘The Potato Head of...

An artist hired to restore the face of a decades-old statue in Spain did such a hilariously bad job, the piece has now been nicknamed “The Potato Head of Palencia,” according to a report. The 1923 …

How is it that people who are singularly unqualified to perform art restorations keep getting approved to work on valuable antiques?

A bit of a conspiracy theory here, but I wonder if this isn’t starting to become deliberate? If you do a competent job and do a proper restoration then–unless it’s the Mona Lisa or the Sistine Chapel–basically no one even really notices.

Whereas if you botch the hell out of the thing, you–and the venue–both become famous! Granted, it’s the sort of fame that mostly consists of people pointing and laughing, but for some people, any kind of fame–even infamy–is still fame. (“There’s no such thing as bad publicity!” as the old saying goes.)

And what are the real consequences here? It’s not like anyone is actually being sent to the Art Restoration Re-Education Camps. You and the venue become a funny Internet meme; people probably come to see* your “restoration” and maybe even buy a T-shirt or a coffee mug with a picture of Potato Head Jesus (or whatever it is) in the gift shop.
*Pre-COVID or post-COVID, that is.

Now give-a me my money!

And what are the real consequences here?

Fucking up a one-of-a-kind piece of art is the main consequence I can think of. Assuming the damage can be repaired, it means a lot more time and expense for the actual expert who must now restore a piece of art that’s in much worse condition than it originally was.

How is it that people who are singularly unqualified to perform art restorations keep getting approved to work on valuable antiques?

A bit of a conspiracy theory here, but I wonder if this isn’t starting to become deliberate? If you do a competent job and do a proper restoration then–unless it’s the Mona Lisa or the Sistine Chapel–basically no one even really notices.

We the public may not notice, but the art restoration community does. People make pretty good money in doing this sort of work, and that is not the type of reputation that will get you repeat work.

There may be some that are willing to trade their career for some brief infamy, but I would think that they are few and far between.

I think that it’s just contractors cheaping out.

There was a reddit thread a while back where someone talked about a contractor firing the qualified restorer, hiring someone with substandard qualifications, and making a huge mess of the whole thing.

And the caretakers don’t check the bidder’s portfolio to assess the quality of their prior work?

And why do these incidents keep happening exclusively in Spain?

Wow, that is hideously bad. Did they hire Mr. Magoo’s Art Restoration service?

And the caretakers don’t check the bidder’s portfolio to assess the quality of their prior work?

And why do these incidents keep happening exclusively in Spain?

Given that the article says that people are calling for stricter oversight, I would say that Spain probably does not have very strict oversight.

I know that in at least some of the European nations, there are historical oversight committees that have quite a bit of power when it comes to any work or restoration on historical landmarks. They can fine and sometimes even prosecute contractors and workers who do substandard work. There are actual qualifications and licenses required of anyone who is going to do such work.

I would assume that Spain does not have such an agency, or if they do, it doesn’t have any teeth.

Dang. Turned that nice lady into a cyclops!

Unless that “before” picture was taken long ago, it doesn’t seem like restoration was really called for.

The only “potato head” that this resembles is from the first Toy Story:

Rather than “hilariously” I think the more appropriate term is “tragically.”

I don’t know who that statue was supposed to be, but it’s Mr. Bill now.

What I like to ponder is, how did it feel for the artisan when he/she got to the point of thinking, “Hang on, this isn’t how this should look.” I’ve botched enough repairs/touch up jobs to be familiar with the feeling that you have just gone one error too far, but never with anything important.