Any boaters on the SDMB? If so, what and where?

I was wondering if there are any avid boaters (guess that includes you fishermen, too) on the SDMB.

Where do you use it?

I am all over Cape May County, NJ (USA) and down to Delaware and Maryland via the Delaware Bay. I tow 'er over to Cape Charles, VA (on the Chesapeake) every August, too.

I am on Speedwake.com, Offshore.com and iBoats.com (Philster on those boards, too)

So, who is out there?

Me and Das Boot. 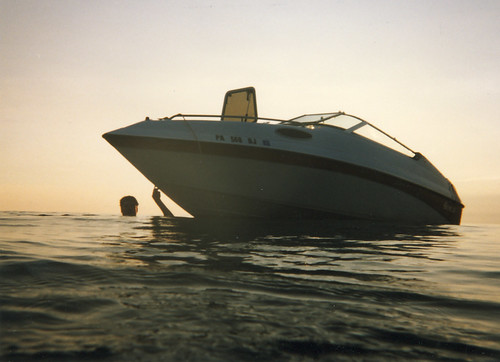 Do dragon boats and outrigger canoes count? And does it count if I don’t actually own them?

I paddle on the Lachine Canal, and race at various events around the Montreal region and Québec during the summer. I’m on the water 3-4 times a week from May-October. If I can ever afford one, and more importantly, ever have the room to store one, I can very much see myself buying my own outrigger one day!

Probably not what you were looking for (450 HP!!), but I sail a Catalina 34 on San Francisco bay. We run Doyle dacron for main and jib and an asymetrical spinny for downwind runs on quiet days.

The iron jib is a 23-horse Universal diesel with a mean streak as wide as the golden gate.

Take it to any reasonably local lake or river ramp I can find.

By saying the following, I am not trying to disrespect anyone in this thread or who is involved with boating in any way-the sea exerts a very strong pull on my psyche (if I had more money…). But I get the feeling that boats tend to sit in their docks (or storage buildings et al.), unused, for a very high percentage of the year. From my mom’s condo I can see perhaps 10-20 miles out into thr Atlantic, but even during the summer, during a nice steady seabreeze, it is a very rare sight to see a full-fledged sailboat out there (motorboats yes, hobiecats yes). Is this a common syndrome amongst your sailing acquaintances, they buy the boat, use it a few times, it then sits there unused for years?

I wore a boater at school, but it’s long gone, sorry.

I’ve got a red 14’ Mercury inflatable with a 25 hp short-shaft Mercury four-stroke (good economy, and less polluting than a two-stroke). I got it for diving and crabbing.

I’ve been diving from it once, and crabbing three or four times. I should sell it.

When I was in jr. high I was in the San Diego Navy Sailing Club and sailed most weekends. It was a hoot, being 13 and teaching adults how to sail.

I boat on the Colorado River about 100 days per year.

I have a 17’ 3" wwod kayak that I made from a kit (stitch and glue).
I mostly use it on the backwaters of the Mississippi, but this year I used protected bays of Lake Michigan and Green Bay as well as the Kickapoo and La Crosse rivers.

Mostly trailer it to various lakes, and rivers. As I’ve gotten older, my kids have become the prime users. They’ve added a Skylon and Phatsacs, and mainly use it for wakeboarding.

Here’s an old pic getting ready for a weekend of winter skiing. My enthusiasm for winter waterskiing has diminished as my age has increased, but at one time we even had a system for pumping hot water into our wetsuits. This seems like insanity now.

I want to sell it and get a sailboat, but the kids howl and plead every time I try. Eventually I’ll win the battle, tho’.

Used to hang out on wakeworld.com, but haven’t in awhile.

We average about 50-70 hours a year, according to the engine meter. This year was unusual, at about 130 hours.

Take it to any reasonably local lake or river ramp I can find.

I am sure that thing hauls as$!

Not an owner, but I had a hell of an adventure as a deckhand a few years ago.

Here’s an old pic getting ready for a weekend of winter skiing.

I bet it’s a hell of a job to back up in that rig.

I have a 17’ 3" wwod kayak that I made from a kit (stitch and glue).
I mostly use it on the backwaters of the Mississippi, but this year I used protected bays of Lake Michigan and Green Bay as well as the Kickapoo and La Crosse rivers.

I won’t be inviting you on our local creeks, then.

I have a 9’ Dagger Approach Kayak. Powered by a cheap Bending Branches paddle - oh… 190cm, I think. And me! Good for small lakes up to class II whitewater, so far. (The boat is probably good to class III, but I’m not - yet!)

I use it pretty often - last year, with a better work schedule, I’d take my boat to work with me most days and have an hour or so paddle on the way home. I probably only did 4 weekend long trips this year, but mostly because the water levels on the rivers were too low to navigate them. Here’s to rain!

I have a 17’ bass boat with an engine that’s older than I am. Runs fine but I haven’t used it in months. I prefer fishing on foot or from a kayak.

I have a 17’ aluminum canoe I take to the Northwoods of Wisconsin once a year and Cook County Forest Preserve creeks and lagoons in between. My friends fish, I mostly like to paddle around and have a few beers.

Did Lake Michigan a few times and the north branch of the Chicago River.

Also got thrown out after portaging into the Chicago Botanic Gardens.

I am sure that thing hauls as$!

Well, mine at least

I’ve had her +70 GPS on Lake Cumberland before I got a little squirmy behind the wheel. (I was racing another bass boat and was pushing beyond my comfort level)

I had a Cal 230 sloop and sailed her in the San Francisco Bay most weekends. We sold her because we moved to another city and didn’t have time to take care of a boat or sail it any longer. It was also getting expensive to fly down to sail for the weekend and we didnt want her to languish alone in the marina. But we plan to buy a new sailboat one day when our work schedule slows down and we can commit to another sailboat.

I love sailing in the SF bay especially near Alcatraz in the rougher waters. Damn that Berkeley pier, hated it that friggin thing gave me stress every time it was so hard to see at night.

This year we bought a new black Four Winns H183 Fish/Ski that we take to a number of lakes here in Montana. It’s very quick and comes with a 190 hp Volvo Penta 4.3 GL/SX and a 12V trolling motor.

In particular we like boating/fishing on Swan Lake and occasionally on the Flathead… but it’s a little small for that size of a lake!

Unfortunately, we can’t use it in the winter unless we want to drive 500 miles south.

Eat your heart out…