Anybody care to speculate what's going on with these ambulances near my home?

Occasionally, I’ll see or hear an ambulance with their sirens on. They seem to be driving around in circles on the various city streets with no real destination.

My first thought is they’re doing some sort of training exercise. But then last night at about 2am, the sirens start again. And those sirens did NOT go silent for nearly an hour. It about drove me crazy!

Are you sure all of those sirens are ambulances? There could easily be some police and even fire vehicles mixed in.

They sometimes get lost or miss a turn like anyone else.

Last night it was a singular siren. The siren would go through a cycle of sounding further away and then closer. This back and forth went on for nearly an hour.

My first thought is they’re doing some sort of training exercise.

That’s possible. An apartment building about a block away from here was slated for redevelopment and repeatedly set ablaze to be used by the fire department for training.

I’ve been to multiple different burn houses on numerous different times. Burn houses are specially built structures built by the fire academy/dept to train fire fighters. They are built to safely train / allow practice in fighting fires in a safe environment; where you don’t need to worry about structure collapse from either fire or water damage. They’re build of large steal beams, concrete & brick. Windows & doors are heavy gauge steel. They’re relatively inexpensive & easy to build as they’re just a shell. No plumbing (possiblyt a cast iron standpipe), no electric, no interior walls or ceilings.
While anything is possible, I highly doubt a standard building is being used for training multiple times. I’m fairly certain that’s homeless/kids/arsonists setting those fires.

Sometimes the last block or two to the burn building will be with lights & sirens but that’s usually thru the parking lot to the burn building on the back of the property. Again, somewhere else might be different but I highly doubt it; if they ran ‘hot’ to a planned training exercise over public roads & there was an accident, they’d have liability as traffic laws typically state you can’t use lights/sirens except when responding to an emergency (sorry, not looking up all 50 state laws).

EMS will sometimes stage in the vicinity of a call (a block or two away) until the scene is safe to proceed in (especially domestic violence incidents). If they’re sitting on the side of a busy road, I could see sitting with lights on but there’s no reason for sirens to be on while sitting there.

While anything is possible, I highly doubt a standard building is being used for training multiple times. -

Requirements and Regulations for Open Burning and Fire Training | US EPA

Intentional burning of facilities is considered demolition under federal asbestos regulations, even if no asbestos is present. Learn about regulations and requirements for open burning and fire training.

As the link provided by @running_coach shows, not always. Here are more ordinary houses being used for training: 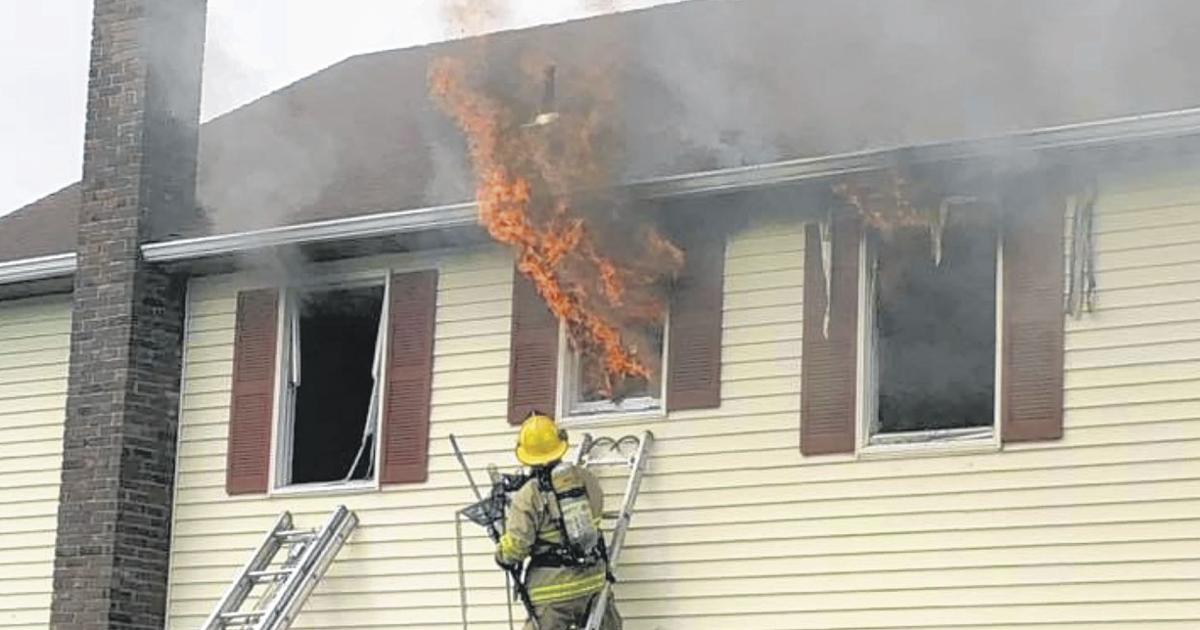 Firefighters use vacant houses for training

So was the apartment building I’m referring to. Our building is of similar construction and is so solid that it interferes with WiFi signals. It’s only 1000 square feet but we need boosters for a steady signal at the far end and had to downgrade our Ring doorbell because it wouldn’t maintain a steady connection.

NB: 1000 sq. ft. is for our condo; this building has five others of the same size plus a smaller one in the basement.

How can you tell it’s the same ambulance rather than multiple ambulances ?

If it went on for an hour in the middle of the night near my home … well I’ve gotten up and gone out and told single moped riders to please stop, for the love of God. Would also maybe call it in and get all my neighbors to do the same. If it happens a lot, get your neighbors on board ahead of time.

I have never gotten up and told an entire sideshow full of hundreds of people to STFU, although I fantasize about doing that regularly.

My first thought is they’re doing some sort of training exercise. But then last night at about 2am, the sirens start again. And those sirens did NOT go silent for nearly an hour. It about drove me crazy!

Is there a hospital facility in your neighborhood you just haven’t noticed?

Where I live you will occasionally hear an ambo tearing up or down the highway towards a major hospital app 25km away. But sometimes there will be multiple sirens over a few days, like 6-7 a day x 3-4 days. My daughter suggested that perhaps it is the arrival of a pretty nasty batch of illicit drugs that takes people unawares.

Seems plausibly enough for me.

Or, for that matter, a nursing home, seniors-only apartment building, or an MR/DD group home? There are several of each within a mile or so of my house, and I hear sirens all the time.

Some FDs will absolutely use a real dwelling if the opportunity arises; what I said is they’re not going typically to use that dwelling multiple times. If a building is poured concrete construction, maybe; however, if it’s typical wood frame construction it’s hard to tell what percent of weakness those partially burned 2x4 are at & lighting them again could cause catastrophe.
We’ve done hose line advancement & venting training w/o any fire being lit; it’s much safer as the instructor can instruct in technique &/or stop/correct the trainee w/o any concern for any concern for urgency because a building is burning. Your article indicates they did training there multiple days, it is unclear from the article if they burned the building multiple times or just once & did the non-live burn training on the other days.

Some FDs will absolutely use a real dwelling if the opportunity arises; what I said is they’re not going typically to use that dwelling multiple times. If a building is poured concrete construction, maybe; however, if it’s typical wood frame construction it’s hard to tell what percent of weakness those partially burned 2x4 are at & lighting them again could cause catastrophe.

These buildings – I had forgotten that there was a second building around the corner until I found the fire department’s annual report for the year this happened – were part of the post-war housing boom. All concrete and steel behind brick. The annual report does not mention how many times they and a neighboring VFD visited the buildings but it was definitely more than once. It had gotten to the point that my SO and I were wondering when they’d be done with the one on our street and allow it to be razed.

Once in a while, they will use a slated-for-demolition building for FF training, and let the neighborhood know about it and mention it on the news. The most recent incident was when a quasi-historic house and the land it was on were being sold to a developer; the Habitat ReStore came in and took anything that was salable and/or not nailed down, and then the fire department came in and set it on fire for training.