Are there any red, yellow, or purple police uniforms?

In the English-speaking world, police officers tend to wear blue, black, brown, or beige uniforms. The German-speaking world clad its officers in green until relatively recently; now blue seems to be an EU-wide standard. Grey police uniforms are or were common in the countries of the former Eastern Bloc.

Are there any uniformed law enforcement agencies where the base colour of the uniform is red, yellow, pink, violet, or some other colour not mentioned above? The only example I can think of is the Red Serge of the Royal Canadian Mounted Police, though nowadays this uniform is used only ceremonially and not for day-to-day duty.

Well, there’s the Swiss Guards, whose uniform is red, yellow AND purple: 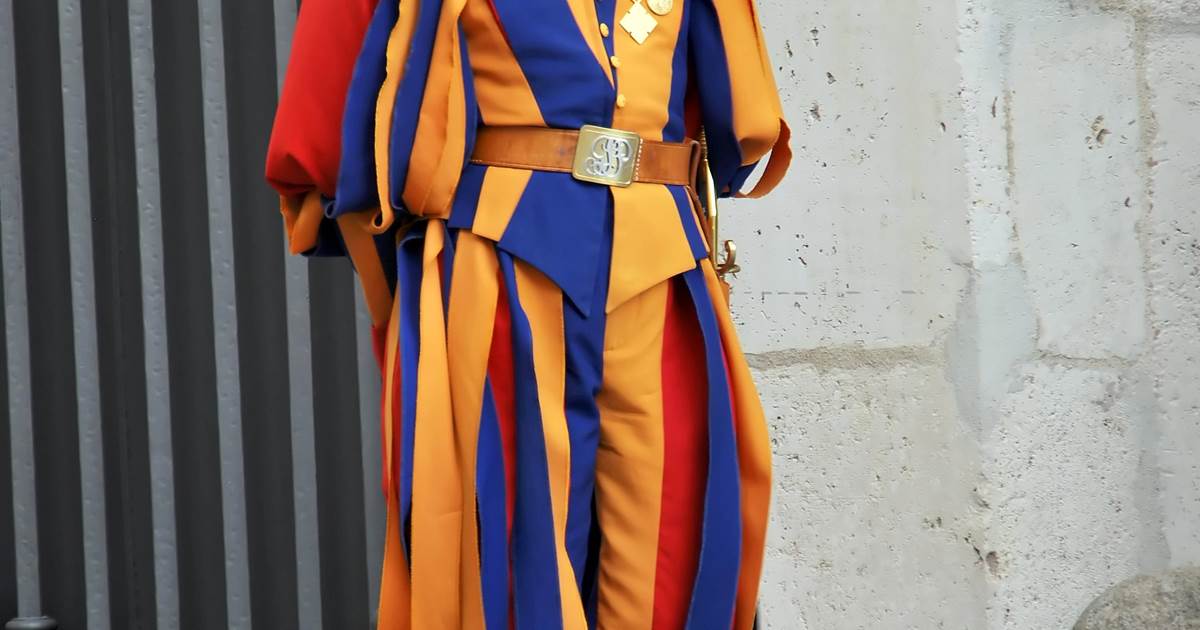 Not sure if you’d count them as a police or not.

Montreal - but for very specific reasons which probably make them ineligible for the OP’s question.

No, I don’t think anyone would count the Swiss Guards as a police force, particularly seeing as the Vatican actually does have its own police force (with standard blue uniforms).

In Taiwan, it used to be common for cops to have light purple uniforms, but now they’ve transitioned to dark blue.

The Royal Canadian Mounted Police counts as a police force, I guess?

Read only the thread title, I guess? (Pun maybe intended?)

A lot of the time a lot of UK police wear high visibility (neon yellow) jackets, vests and even trousers in the case of transport police. I know it feels like this shouldn’t count, but I think you’d have a hard time defining uniform to exclude them.

otoh, it’s not the official, main color.
But i think this is best bet for the op. I’ll bet there are uniforms that only have the high viz variant.

Las Vegas metro cops have a yellow uniform variant (I think only for the bicycle and transport divisions.) It’s obviously used in high-viz cycle wear, but it also includes dressier shirts, same as the ordinary beige ones, in that colour, as well.

Yeah, and the first paragraph of your OP, sorry, no pun intended.
Then I will go for the Local Basque Police force, the Ertzainza. Red too. At least, some of the uniforms. The Mossos d’Escuadra, the regional police in Catalonia have big shoulder patches in yellow or red, look like a safety feature to be seen, but it is part of the uniform. The Guardia Urbana in Barcelona even more so, the color patches cover the whole upper breast.

Just chipping in that both green and blue have a long tradition in Germany as colours for police uniforms. The development was a bit erratic, but in a nutshell the story is as follows: In past centuries, policing in Germany (as in many other European countries) was handled by paramilitary gendarmerie forces in rural areas and local police forces in cities (the word “police” is etymologically linked to “polis”, Ancient Greek for “city”). They were organisationally separate. The gendarmeries would often wear green uniforms, as many of their military counterparts, whereas the urban police officers would usually be clad in blue. During the Nazi period, the police would get grey uniforms that were intentionally similar to the style of the Wehrmacht military uniforms, but after 1945 most German states reverted to pre-1933 traditions. The distinction between rural and urban policing faded in the subsequent decades because most German cities shut down their local police forces and handed over law enforcement tasks to state police forces; in the 1970s, then, the states agreed to standardise their police uniforms to green. This move was, in the 2000s and 2010s, undone, and now the standard is blue, with the old green design being phased out.

Here in the US, we don’t really have any equivalent to the part-military/part-police gendarmerie/carabinieri/marechaussee any more, so that explanation of how the German police uniforms came about is really interesting to me. I mean, we have state police, but they’re not military; they’re just police with a statewide jurisdiction.

Even when we did have a sort of equivalent (the Texas Rangers & Arizona Rangers come to mind), their role was different, and they weren’t uniformed. These days, they’re no longer paramilitary, and have a dress code more than a uniform.

And to the OP, I present the Minnesota State Patrol’s dress uniforms

and the West Warwick, RI police.

I mean, we have state police, but they’re not military; they’re just police with a statewide jurisdiction.

It’s the same in Germany now. The vast majority of policing is done by state police forces. The cities, in theory, retain the legal power to maintain local police forces, but only some major cities actually make use of this (for budgetary reasons), and even in those cities that have a local force, they deal with rather petty day-to-day stuff whereas more serious matters are handled by the state police force. There is also a federal police, but with very limited jurisdiction (e.g. on railway stations or airports, as these fall within the federal remit). None of these forces would nowadays be considered to be military or paramilitary.

And for the sake of completeness, there is, of course, the peculiarity of the “city-states” - states that consist of only one city. In those cases (Berlin, Hamburg, and Bremen), the local and the state level coincide.

I would, however, assume that the European gendarmerie (rural) versus police (cities) distinction has an analogy in the US in the form of the county-level sheriff’s departments that carry out law enforcement tasks outside incorporated cities?

I don’t know if the OP considers this gear worn by the Belgian Police a uniform or just protective clothing, what the Cycle Police wears looks rather like a uniform, even the helmets are matching orange. Police on Bicycles is the future! (reads the Dutch heading: note the Politie writing on the bicycle itself).

Not a full uniform, but the stripes on the trousers of Chadian police uniforms designate the type of service. Yellow for the Mounties nationwide. Red is often used for municipal police.

The German-speaking world clad its officers in green until relatively recently; now blue seems to be an EU-wide standard.

I gather green uniforms are common in Dubai and Vietnam. 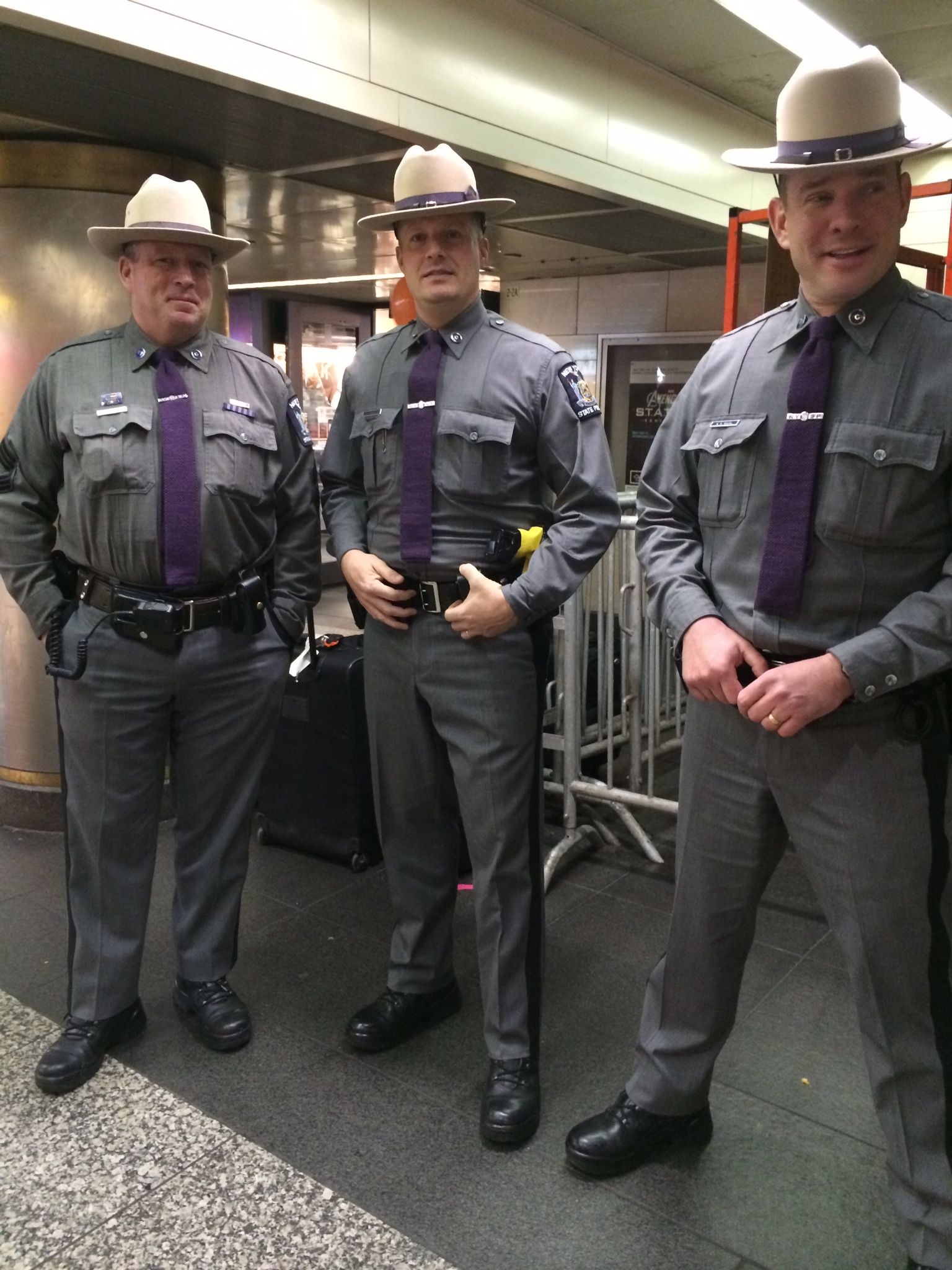 I’m surprised I haven’t heard of any cities changing police uniforms to pink as a psychological calming measure, in the tradition of Iowa football coach Hayden Fry, who had the opposing team’s locker room painted pink. 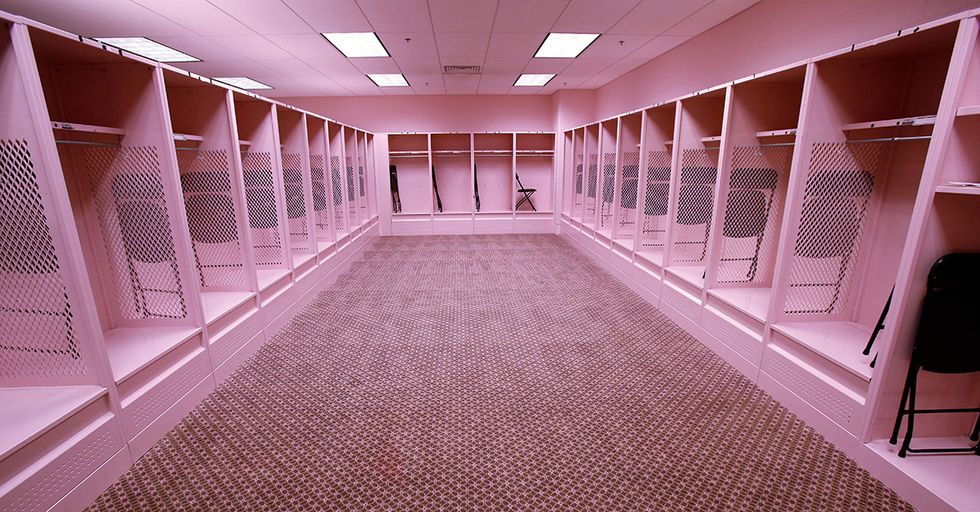 The historic pink room has been part of college football lore, yet surrounded by controversy.

Not a full uniform, but the stripes on the trousers of Chadian police uniforms designate the type of service. Yellow for the Mounties nationwide. Red is often used for municipal police.