Are you a Brony? (AKA, are you a male who watched My Little Pony: Friendship is Magic?)

Brony (n): A name typically given to the male viewers/fans (whether they are straight, gay, bisexual, etc.) of the My Little Pony show or franchise.

I am not, although all this talk about what a great show it apparently is has got me curious to watch an episode or two sometime.

I watched the first season and a little bit of the second. As I recall there were two bad episodes but for the most part it was surprisingly good.

I watched the first episode to see what the fuss is about. It seemed like an ordinary kids’ cartoon to me, not something that would strike a chord with a grown man.

I haven’t watched it lately but I have seen most of the episodes and really like it. I’m not a guy, though. Pegasisters for the win!

Anyone else baffled by the my little pony thread?

It’s a charming, rather intelligent show that manages to appeal to people far outside its target audience, while still being accessible to kids. It’s sweet without being saccharine, and it doesn’t treat children like idiots. The fact that all of this completely subverts expectations based on the horrible half-hour toy commercials of the 80s undoubtedly helps, too.

The community actually interests me as much as the show at this point. It’s been fun to watch, and the sheer volume of creative output from fans has produced some interesting results. (Along with lots of horrible dreck, of course.) The intersection of memetic subcultures–Bronies and Whovians, for example–is fascinating to me.

Never seen it for better or worse.

I’ve watched it and I’m a big fan. I read MLP fanfics. If I had the money and the room I’d buy MLP merchandise. So I suppose that makes me a Brony.

I watched some of the first season, so I could hold a conversation with Number One . It was surprisingly good compared to the horrors of similar programming from my youth in the 80s. However, I’ve noticed the same with some of the nephews’ shows – Phineas and Ferb, Adventure Time.

I’ve seen a couple of episodes and honestly don’t see the appeal. I get why a little girl would like it. Anyone older, I’m lost.

The community actually interests me as much as the show at this point. It’s been fun to watch, and the sheer volume of creative output from fans has produced some interesting results. (Along with lots of horrible dreck, of course.) The intersection of memetic subcultures–Bronies and Whovians, for example–is fascinating to me.

Seconded, and let me add that the show is apparently written by the nerdiest nerds to ever nerd a nerd, and is loaded with fun easter eggs.

Never seen it. And after a couple of encounters with real-life Bronies, I don’t want to at all. Probably most Bronies are really cool. But the few I have met are decidedly not.

OP, trying to get into the show this late could result in some hype backlash, especially given how MLP’s insane fanbase sings its praises all over the internet. To give it a fair shot I’d say watch until at least episode 7, maybe 9 (still one of the funnier ones), or 11 (first good song number, a vicious ear worm). It’s one of those shows that makes dramatic leaps as time goes on and it figures itself out, especially when it comes to fleshing out the characters.

If you’re a fan of family friendly animation in general I’d definitely recommend it. Especially if you like cute things, musicals, fantasy worlds, mixtures of adventure and slice of life, or mountains of heart warming.

If this is like most other MLP threads eventually people will start theorizing why it blew up so big. If so, I have some magic horse theories.

Anaamika, how much cringe was involved?

The intersection of memetic subcultures–Bronies and Whovians, for example–is fascinating to me. 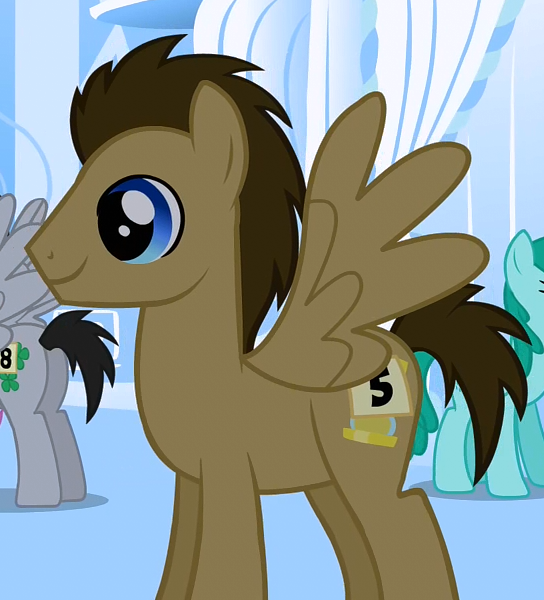 Dr. Hooves, or Whooves, also known as Dr. Whooves or Time Turner, is a background male Earth pony with an hourglass cutie mark. He shares his design with Meadow Song and Lucky Clover. Hasbro acknowledged the character's popularity in the Comic Con...

I’ve only seen maybe 7-8 episodes and I agree with every one else giving it praise but there are just too many other cartoons on for me to be a regular watcher.

I read the first issue of the comic book…which was actually quite good. The art was naïve, but had subtleties. It wasn’t just childish, although it appeared childish at first glimpse. Worth studying; the effect is complex. The writing was very clever. Witty, yet with enough serious thought to reward an adult reader.

I’ve watched it and I’m a big fan. I read MLP fanfics. If I had the money and the room I’d buy MLP merchandise. So I suppose that makes me a Brony.

Given the subject of this thread, this is an interesting username/post combo

Because I regularly watch many of the shows on marshmallow’s list I’ve caught bit as pieces here and there, it’s seems pretty funny.

Any curiosity I have towards the show has long been crushed by my dislike of the subculture.

I’m not it. I’m a father of a 3-year-old that loves the show. So I wind up watching it by osmosis.

Don’t understand the phenomenon, but that’s probably a positive sign.

I’ve actually seen more than a couple of episodes (thanks to a daughter who likes it) but there was no choice for that on the poll. I find it to be more annoying than The Wiggles, but not as annoying as Yo Gabba Gabba. It makes me long for the sophisticated humor of Drake and Josh.

I’m not even bothering to voe.

I’m just curious as to whether there really ARE any “Bronies.” I’m not at all convinced.