At what % oxygen would smoking start to become...problematic?

Pretty much the heading. At what percentage atmospheric oxygen would smoking start to have issues (if any)?

Smoking is already a significant cause of house fires. So the answer would be some amount less than 22%.

I suspect that this is what the OP meant to ask: The burning of a cigarette certainly does have some safety hazards, but spontaneous ignition of atmospheric oxygen is not among them. (At least, I’ve never heard of it happening.) But this would be a problem if there were more oxygen in the air.

It’s safe to guess that a mixture of 99% oxygen and 1% nitrogen would ignite from a cigarette, so the question is: At what % oxygen would smoking start to become problematic?

Oxygen doesn’t ignite. It permits other things to burn (oxidise) but you cannot set light to pure oxygen itself.

The most obvious hazard from burning something like a cigarette in an atmosphere with a higher oxygen content is that it would burn more rapidly, and may cause other objects to catch fire, which may also burn rapidly.

It’s safe to guess that a mixture of 99% oxygen and 1% nitrogen would ignite from a cigarette, so the question is: At what % oxygen would smoking start to become problematic?

I don’t think that’s a safe guess. You’re going to need a flammable gas in the air; not nitrogen.

The Apollo 1 astronauts were burned to death in a pure oxygen fire, and so was the cosmonaut Valentin Bondarenko. Note that it wasn’t the oxygen that burned, but the flammable materials in the capsule or chamber where they died, Bondarenko’s clothes and hair caught fire and he suffered fatal burns, all from a tiny spark.

The moral of this story is- don’t try to smoke in a pure oxygen atmosphere. Safe levels of oxygen are much closer to normal atmospheric levels (but it is never completely safe to smoke, of course).

Correction; Bondarenko was in a 68% oxygen atmosphere, and that was enough to accelerate the flames into an inferno.

When firefighting, we are trained to be cognizant of any possibility that the oxygen levels in the structure we are in might be higher than expected (oxygen tank issues in hospitals, nursing homes, welding shops, etc) because things get WEIRD at higher-than-normal concentrations. Fire-retardent clothing can suddenly ignite very easily, and of course spontaneous combustion of hydrocarbons becomes possible.

I don’t know at exactly what concentration would be the most concerning, but I would not be smoking in even a potentially oxygen-enriched environment.

I could not find the answer in a quick google search, but I do recall reading that once the atmosphere had something like 30% oxygen and that at that concentration any smoldering fire (such as a lit cigarette) would spontaneously burst into flames.

Thank you, eburacum_45. The pure oxygen of Apollo 1 has been in my mind for 63 years now, and it crowds out other valuable information, like how it was the flammable nylon that did so much of the burning, not the oxygen itself. Ignorance fought!

That’s exactly what sparked my question. I am currently reading “Out of thin air” and was reading about higher oxygen concentrations at certain parts of Earth’s history. I was thinking that the tobacco might just ignite in flame instead of ‘smoulder’ but didn’t want to ‘taint’ the answers.

We have had cases in air separation plants (oxygen making plants) where workers near the oxygen vent have completed their work, gone outside the plant, and lit a cigarette with severe burns. Oxygen was absorbed in their clothes.

In high Oxygen environments, you don’t need usual fuel to burn - YOU are the fuel.

Presumably, smoking in an oxygen enriched environment is dangerous, but the definition varies.

And by any reasonable non-biased standards, our own “normal” Earthly atmosphere is extremely “oxygen-enriched”. We just don’t think of it that way, because we’re biased by living in it.

Likewise, by non-biased standards, hydrocarbons like methane or octane would be considered quite stable compounds. The fact that they react energetically in our atmosphere says more about our atmosphere than it does about the hydrocarbons.

At the low end of the scale there is some percentage of oxygen where either the cigarette won’t stay lit or the smoker can’t stay conscious. Not sure which one gets reached first.

Here’s a pretty good demo of smoking with oxygen enrichment. The first 30-ish seconds are the meat of the OP’s question, but the rest is pretty good too, albeit a little corporate and leaden. 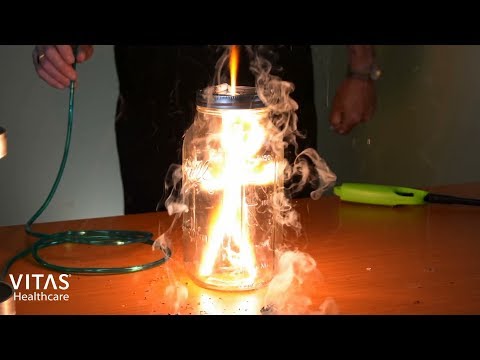 Well, that was moderately terrifying!

I know understand what the author was saying when he said higher oxygenation levels in some times of Earth’s history would have made forest fires…problematic. I just didn’t think it would happen so dramatically at levels that existed.

Here’s what happens when you add liquid oxygen to a hibachi. Don’t blink; you’ll miss it. 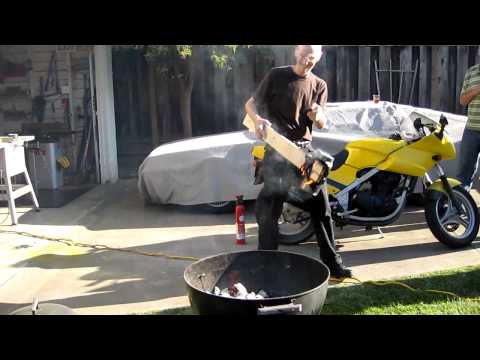 Finally, no discourse (heh) on oxygen would be complete without this classic shown to generations of military personnel who worked with the stuff. Blurred because the climax is not for the faint of heart. Youtube may require age verification before showing it to you.

It’s also a massive throwback to the era when these films were aimed at an all-male audience and women were used solely as attention getting accessories. So that’s your second trigger warning.

At the low end of the scale there is some percentage of oxygen where either the cigarette won’t stay lit or the smoker can’t stay conscious. Not sure which one gets reached first.

I used to work with some old time submarine sonarmen. And they would recount stories from the diesel-electric boat days of working shifts as the oxygen levels were dipping (and likely CO2 levels rising) of sucking on butts for all they worth to keep them lit - the nicotine was the only thing keeping them going. I used to ask how they would value the oxygen needed to keep the cigarette lit more than…for breathing. (They didn’t bother themselves with such details - more important to be able to stare at your screen for your entire shift or pass out trying). The good old days…