Aww, I offer sleeping puppies to the SDMB

It’s been a rough day. I ran across these sleeping puppy pics and thought they should be shared.

I raised my last dog. A tiny chihuahua and only 14 weeks old. It’s amazing how much puppies sleep. They can be walking one minute and sprawled out on the floor the next. The special moments are when the little guy fell asleep in my lap. I wouldn’t move for over an hour. That’s when I really bonded with him. It almost made me forget about the puddle on the kitchen floor.

Do you have any special memories of raising your puppy or kitten? Do kittens just collapse and fall asleep? 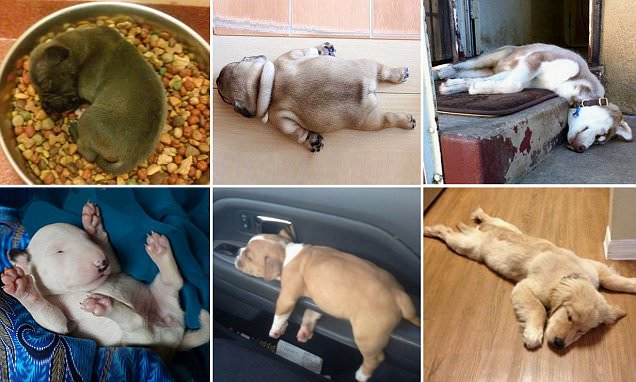 Adorable photos capture the cutest sleeping dogs on the internet

Shared by pet owners on social media, the photos show dogs that were so tired they collapsed into sleep in an array of unlikely - not to mention uncomfortable - positions.

Thank you Susan. I’ve been relaxing and watching a movie with family. Feeling a lot better.

The puppy photos are so tempting. I’d enjoy raising another dog. I remember it’s a lot of work. Have to get up early for potty breaks. The dog (not me)

The years of devoted companionship makes up for it.

My two favorite pics are the Frenchie sleeping with his toy carrot and the spaniel puppy sleeping on his owners lap.

I was taking cute pix of Mr. Wrekkers new squirrel dog sleeping and laying around in odd positions.

He’s just got out of cute cute puppy stage.

Now he’s a rambunctious teen and just gets into trouble at top speed.

Too much squirrel, not enough dog.

Exactly.
I was reading up on his breed: Carolina Cur. AKA: the American dingo.
Stubborn, block headed, smart as crap. He’s never gonna be well mannered.
And, he can run like the wind.

Squirrel dogs have to be especially trained to hunt JUST squirrel. He hunts butterflies, horseflies, leaves, cats, kids. And today he hunted a low flying heliocopter.

I love him.
But I always love the underdogs and the misfits.

He is very comical to watch in all his exuberance.

My wife and I married in 1997. Two years later, we were thinking about getting a dog. Went into a pet store looking for new bunny rabbit toys and there was an eight week old Border Collie puppy (my avatar is her all grown up) in an enclosure with three other BC pups – I assumed they were all siblings. The other three were trying to kill each other, but the one we bought was off in the corner, observing the fracas. She house broke like a dream (one accidental #1, which was my fault because I wasn’t paying attention when she begged to go out.) and settled in like she owned the place. We blocked off the large kitchen with her crate, using the crate door as an entrance for us to get into the kitchen. Not long after, we were out on the lanai (read: Florida Room), sitting in chairs, enjoying the breeze, when we look into the kitchen area and observe the little shnook climb up the dog crate door, launch herself onto the carpet and start roaming the house, looking for us, I suppose. We got a live one, hon, I said to my wife. And I was right.