I was reading an article about the colossal power consumption of mining rigs that is crippling power generation in several countries and the amount of e-waste generated. Did this constant and massive drawing of power result in the coal shortage in China and the resultant ban in mining ?
The Chinese rigs are all supposed to have moved to Kazakhstan and even Texas and Alberta. Sweden being another hotspot.
What do you think will happen when power generation will no longer be keep up with the demand ?
Grid collapses ? Brown / blackouts ?
It is an unnerving thought.

The problems of Bitcoin power usage are largely overblown. Bitcoin uses a lot of power relative to its societal value, which I think you can make a solid argument is zero or less than zero. But compared to power generation as a whole, it’s a very small amount.

Current estimates are that Bitcoin power usage is about 0.5% of global usage, and with the recent price drops, that will drop. We’re not running out of coal or bringing down the grid with a 0.5% increase, although there may be specific locations that have issues.

Generally bitcoin mining is concentrated in places that have below-average power costs, so the most likely result is that the price of electricity rises in those places.

Well, this happened recently (a few weeks ago):

Kosovo’s government on Tuesday introduced a ban on cryptocurrency mining in an attempt to curb electricity consumption as the country faces the worst energy crisis in a decade due to production outages.

“All law enforcement agencies will stop the production of this activity in cooperation with other relevant institutions that will identify the locations where there is cryptocurrency production,” Economy and Energy Minister Artane Rizvanolli said in a statement. SOURCE

Sure, but the question is whether Bitcoin is a substantial use of electricity in Kosovo or simply something that the government is not real happy about for other reasons and is targeted for that reason.

Like when we get those laws against plastic straws, it’s not because plastic straws are the primary plastic pollutant; it’s because they’re visible and banning them is an easy way to look like you’re doing something.

Perhaps there really is a lot of bitcoin mining in Kosovo and this is a substantive step to fix things, or perhaps the logic is “We must do something about the electrical power issues; Bitcoin uses electricity; therefore we must ban Bitcoin”.

Due to cheap power prices in Kosovo in recent years, many young people in Kosovo have got involved in crypto mining.

My read of this is that Kosovo has a broken market for electricity. People mine bitcoin there because electricity is cheap. The solution to fuel and electrical plant shortages should be to increase prices, which will save electricity in general. But there’s presumably no political will to do so.

This isn’t uncommon. ~20 years ago when California had a bunch of rolling blackouts, the problem was a broken market. Had bitcoin existed then, I’m sure some would have tried to ban it, but it would not have really solved the root problem.

The country of 1.8 million people is now importing more than 40% of its consumed energy with high demand during the winter when people use electricity mainly for heating.

Since Bitcoin mining produces heat as a waste product, if Kosovo were really on the ball here they’d let miners buy a license to mine Bitcoin and make those licenses geographically distributed enough that the miners would rent space in individual buildings that need heat. Win-win-win!

Bitcoin mining operations can be very mobile, fitting all the equipment into a 40ft container.

So they can move to where there is a cheap power source that cannot be otherwise used. Stranded power assets are all too common - all that natural gas flaring. This often takes place in places isolated from any infrastucture - no cables. So put everything is a few trucks, burn the gas and run a turbine to generate power for your mining rigs.

At least this is legitimate. There are many parts of the world where the power grid has very poor metering and electricity theft is a big issue. 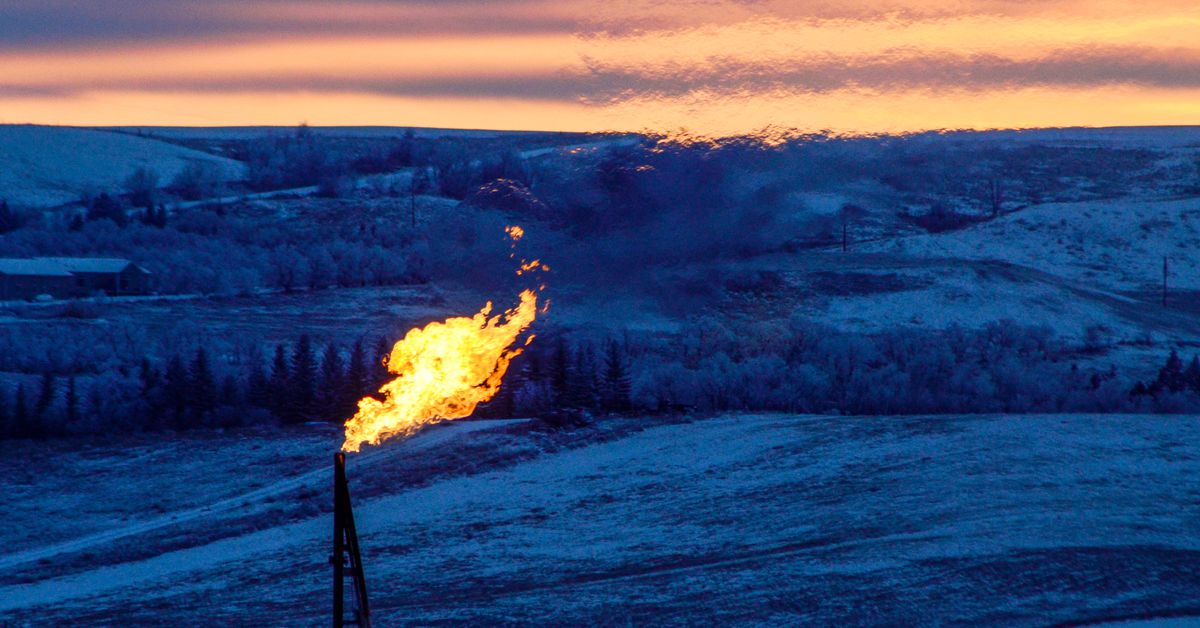 On U.S. oil patches stretching along the Rockies and Great Plains, trailers hitched to trucks back up toward well pads to capture natural gas and convert it on the spot into electricity.

There are only so many Bitcoins that can be mined., they will run out.

Newer cryptocurrencies can use ‘proof of stake’ rather than the ‘proof of work’ for blockchains and the era of these big mining rigs will come to a close.

Bitcoin was an experiment that took on a life of its own when it provided a solution to weaknesses in existing currency transactions. But the underlying blockchain technology has a lot of other potential uses and does not really need to be powered by the hardware required by the mining calculations. It serves simply as a way to ration new coins coming onto the market, making the calculations require more and more computing power.

It will soon be obsolete.

Sure, but the question is whether Bitcoin is a substantial use of electricity in Kosovo or simply something that the government is not real happy about for other reasons and is targeted for that reason.

I do not know for sure but I would guess since Kosovo had a power crisis they needed to find places to cut power consumption and they felt this was an easy first step. It is more important to keep the power running for heating in winter than to let someone mine crypto. So, they shut those guys off. They have little benefit to the economy and no political power…it’s a good first place to start.

Will that solve their power problem? Almost certainly not. But, when you need to start making cuts this was the easiest first step. Not least because the power draw is notable. Maybe not HUGE in the overall power usage in the country but still substantial enough to matter a bit.

And yeah…I do not mine crypto but, when playing games on my PC, my video card can noticeably add heat to the room. The last few days where I live has been in the single digits (Fahrenheit) so it was welcome (not so much in the summer).

I bet we’ll find some any day now

There are only so many Bitcoins that can be mined., they will run out.

This is a bit misleading. Mining still needs to happen after the last bitcoin is assigned.

The blockchain itself is updated and maintained by “mining”, so those rigs need to keep cranking for bitcoin transactions to take place.

And that ‘mining’ will continue to require more and more power as long as it’s proof of work. Switching to other cryptos that use proof of stake is fine and all, but there’s a not inconsequential number of people who will want to be able to trade their existing bitcoins, which will require all that compute to continue for a while.

To put things another way, Bitcoin is estimated to consume about 100 Terawatt-hours of electricity a year. Which sounds like a lot, but amounts to about $10 billion of electricity a year, which also sounds like a lot, but is about 1/3 of the world’s expenditure on toothpaste (cite).
Electricity is really really cheap, which is why coming up with ways to make it that are both environmentally friendly and economically viable is so hard.

How Bitcoin got to the point where it was worth peoples’ while to spend $10 billion a year mining it is of course another question.

My power bill last month would beg to differ.

There is a great deal of talk at the moment about a looming global energy crisis.

There is a big dependency on Natural Gas for heating and electricity generation. The predictions are that that the prices are rising and are going to stay high for a couple of years.

Natural gas is necessary for a lot of developed economies who are looking to transition from coal power. In Europe is also a significant geopolitical issue because of the dependency on Russian natural gas and Mr Putins sabre rattling with NATO.

If that kicks off the cost of gas and electricity will rocket.

Electricity is cheap in some places, for sure. Where there is an excess of renewables such as hyrdo/wind/solar and not enough consumers. NG flaring by the Oil and Gas business is such an untapped, very ‘stranded’, energy rich resource. It is being wasted. I am sure deals are being done.

Current estimates are that Bitcoin power usage is about 0.5% of global usage, and with the recent price drops, that will drop. We’re not running out of coal or bringing down the grid with a 0.5% increase, although there may be specific locations that have issues.

0.5% doesn’t sound like a lot in the abstract but seems absolutely massive for such a narrow (and not especially economically productive) use of energy. Let’s say we’re at about 24 billion KwH per year (2018 was 23.4 billion). 0.5% is 120 million KwH. That’s not nothing.

This is a bit misleading.

0.5% doesn’t sound like a lot in the abstract but seems absolutely massive for such a narrow (and not especially economically productive) use of energy. Let’s say we’re at about 24 billion KwH per year (2018 was 23.4 billion). 0.5% is 120 million KwH. That’s not nothing.

Yeah, I was actually thinking .5% is freaking HUGE for such a pointless task.

such a pointless task.

It is creating an asset that people want. Why is that pointless?

It is creating an asset that people want. Why is that pointless?

Well, it’s not pointless if people want it, but it has no intrinsic value and I would argue that its creation does not create economic value the way that mining hard resources does. Wall Street creates things like securities and bonds out of nothing because people want it and assign extrinsic value to it, but there is next to no cost to do so.

Two questions. What is “proof of stake”? What happens if the cost vs. payoff of mining makes mining pointless? The longer you go, the less payoff from a successful computation there is. And, at the very least, you have to pay for all that power. What happens to all those bitcoins if no–or very few–transactions are ever completed?

The blockchain itself is updated and maintained by “mining”, so those rigs need to keep cranking for bitcoin transactions to take place.

But why would they?

They run those rigs in order to mine the bitcoin, not to provide transactions. If there are no longer bitcoin to be mined, then why would they do so?

Well, it’s not pointless if people want it, but it has no intrinsic value…

To be fair, the dollar bill in your pocket (or whatever currency you use) has no intrinsic value either.