I love this series of games. One, you get to draw on the board, and how cool is that? Two, it’s competetive but it isn’t cutthroat; you’re not trying to bleed your opponents dry, as in Monopoly. And three, you learn geography.

Anybody else play this? Anybody not in the U.S. ever try this game?

I enjoy it but my preference for rail games goes Railroad Tycoon then Age of Steam then 18xx and finally Empire Builder. Obviously Ticket to Ride doesn’t count.

I only have Empire Builder and Nippon Rails myself. Mayfair was offering a steep discount on Nippon Rails a few years ago when you bought another train game. I am curious to try Russian Rails since I’ve heard that’s the preferred one for Empire Builder fans. I keep meaning to try Iron Dragon as well though I know some people don’t count it as part of the series.

You obviously missed my post in the thread for Origins. The only versions I don’t own are Russian (I bought it, but gave it to a friend for Christmas. Since we play the games at her place, I haven’t bothered to get a new box for myself.) and Iron Dragon.

I don’t know anyone that doesn’t consider Iron Dragon part of the series. It adds some interesting mechanics, especially the conductors, but it is no more out there then Lunar Rails. Both of the are long compared to the more realistic versions, but they are fun games.

Our local favorite is India. Good possibilities of loads going from side of the board to the other, no matter where you are, major cities are spread nicely, and there is a nice variety of terrain.

Russian is fun, some different mechanics, with the fall of Communism and the double even cards. Although I am not going to complain too loudly about it, it is the game we played in the EBI finals at Origins this year. I had to deliver the winning load twice in that game to put it away. (We were on our third time through the deck, the tax card had come out twice, the second time when I delivered to get $252 million to win. :eek: :smack:

) It took about 15 more turns for me and the guy I was fighting for the win to get winning runs again. He stopped 4 moves out from delivering, then I delivered for $261 million to win. Fun game.

A couple of other guys in the game don’t care for Russian, they say it is too much feast or famine. One of them (A very good player. When I saw him at the table I figured it would be him and the guy who came second that would be fighting to win.) came in last, spending the vast majority of the game pitching cards trying to put together decent runs. They wanted to play China Rails for the final, but that version seems to me to be even more dependant on just a few runs. But it is a fun game.

Yeah, I am a fan of the series.

I was introduced to the game around 1990. Mrs. Raza and I play each other every weekend. We have USA, North America, Australia, and India (at least; maybe others scattered around).

We’ve made a number of rule changes that introduce extra strategy and make the game go a bit faster. Purists, we ain’t.

I like these games (I’ve played NA, Europe and Iron Dragon) but I have no one to play with

I used to have an online version of Iron Dragon; I should try to find that again.

I still have the computer version of Iron Dragon. Unfortunately I don’t have my registration key any more and I can’t get a reply from the company that made it.

Rail Game Fans has computer versions of both Rail Baron and the EB games. I have not used them, but quite a few of the people at the Puffing Billy tourneys have mentioned them. You can play them against the computer or against others I think.

At home, we start the game with 4 cards (we don’t draw one after our first delivery), we use warehousing (when you drop a load at a city, it stays there for 3 turns), and we use the circus with a variable number for each persons circus number (if your highest payoff on the first 4 cards is on card 157, then 7s are your circus card instead of the normal 10). So we use a few variations ourselves.

Rail games fans should be aware of Railroad Dice 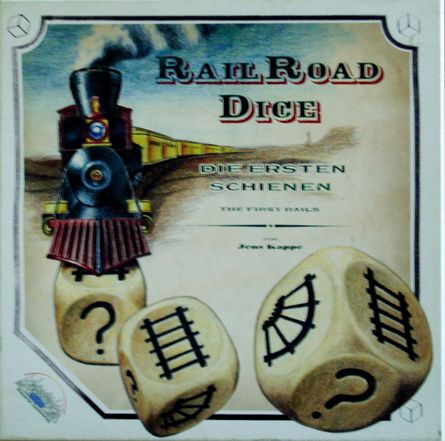 Railroad Dice: The First Rails is the first game in a new series of railway games using dice as their main component. Each player is an investor who wants to take control of one or more of the 5 Railroad companies with the aim of constructing as...

I’ve seen it played, but have never played it. I’m mentioning it not because the game is good (I don’t know), but because of the starting rule

The person who owns the most railroad games goes first

I like playing EB and the other crayon train games. In fact, I’ll probably get a game or three in at the WBCs.

I had a high school friend who’s a big fan. I don’t think I’ve never played it, IIRC, but he loved it.

Raza, what are your house rules?