Senator Bob Dole is about to turn 97. The Greatest Generation continues its slow exit. I am sorry he had to see what we have done to his country and his beloved Senate.

He endorsed Trump. He got what he wanted and now he can go suck a rotten pickle.

Dole supported Donald Trump though. He didn’t have to do that - he could have called him a disgrace or any number of things, but he didn’t.

The fact is, some of that generation honestly are fine with Trump. A few years ago a former Major General named Sidney Schachnow died - a very influential Special Operations soldier who helped create Delta Force, real-life Metal Gear Solid shit. The news of his passing motivated me to look up his Wikipedia page, which informed me that HE, too, supported Donald Trump.

As much as we idealize the Greatest Generation, they tend to have a very parochial worldview which aligns more with Trump than with the Democrats.

I was best man at Sid’s daughter’s wedding.

And for the record I’m not trying to imply that he was some kind of irredeemable soul just for supporting Trump. It’s not like his sole legacy is “supported Trump,” far from it. Nor is that the case for Bob Dole. Just that there may not be quite the cognitive dissonance in these people supporting Trump as it would sometimes seem. There are many ways that someone could compartmentalize it.

I don’t write it off so readily.

Yes, there were (and are) a lot of people who support Trump because they’re idiots. But Dole and the people like Dole aren’t idiots. They knew Trump was the wrong choice for the country and the world. But they supported Trump because they felt it would work better for the Republican party and themselves. They placed their own interests above the public good.

I get Dole hates Ted Cruz but the 2016 primary ended a long time ago. 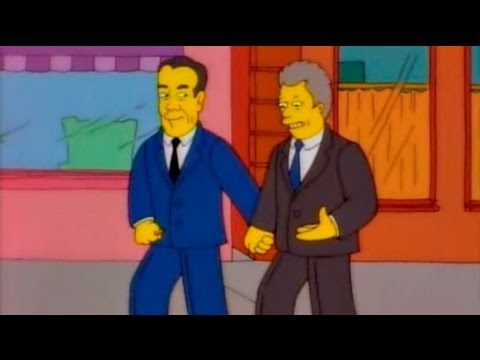 If you can think of a simpler way, I’d like to hear it.

Dole endorsed the slow burn of the republic all the way. He might have done it quietly, but he’s been there embracing it all along.

Every Democratic nominee since 1976 is still alive.

Has Dole continued to support Trump or was that just for the 2016 election? It’s not surprising that Repubs supported him in that election, it’s something quite different if that support has endured.

Here in Kansas there’s a heated Republican primary for the Senate seat currently held by Pat Roberts, who is retiring. Dole has endorsed Representative Roger Marshall, who’s a Trump guy. But as far as I know, Dole hasn’t said anything directly regarding Trump for quite some time.

However, It wouldn’t matter who Dole endorsed. All four of the candidates are trying to out-trump the others by proclaiming their allegiance to the president. Marshall probably has the best chance to win the general election.

In 2015, Dole endorsed former Florida governor Jeb Bush … After Bush ended his campaign following the South Carolina primary, Dole endorsed Florida senator Marco Rubio … During the campaign, Dole criticized … Ted Cruz, stating that he "question[ed] his allegiance to the party" and that there would be “wholesale losses” if he were to win the Republican nomination. Dole endorsed (Individual-ONE) after the latter clinched the Republican nomination, while all other then-living Republican presidential nominees, George H.W. Bush, George W. Bush, and Mitt Romney and became the lone former nominee to attend the 2016 Republican National Convention …

Yeah, that Reagan-Doctrine bullshit about party allegiance (never speak ill of a fellow R) has only served divisiveness in this country as the Republican Party has tacked increasingly toward Stalinist autocracy.

It’s not surprising that the supported him in that election, but they didn’t have to. They should have recognized then that their party had gone adrift. With the exception of a handful of notable figures, the Republican party as a whole has been taken over by white Christian nationalists. The party was heading in that direction in 2012, and they had a chance to disavow the politics of division. Instead, they leaned in, and there’s not a single solitary Republican who supported Trump who didn’t see what was happening. I can accept that some people thought, like Hindenberg in Germany, that they could control and use racist nationalism, but of all fucking people, the guy who got shot fighting fascists in Italy should have known better than to throw his support behind that flag.

There’s no excuse for Dole supporting Trump - then or now.

I’m not so sure of this. I think it is very possible that they thought Trump, despite his obvious flaws, would be better for the country than Clinton.

But as to the OP, while the Senate has on occasion done good things for this country, as a general rule they’re all a bunch of craven, self-important and feckless individuals. The “Greatest Deliberative Body in the World”, my ass. The Senate may be beloved by Dole, but not by me. Not by a long shot.

I’m not so sure of this. I think it is very possible that they thought Trump, despite his obvious flaws, would be better for the country than Clinton.

I can’t believe they were that stupid.