Another lesser-known part of Gibson lore: the 1964 team photo.

Bob Uecker had joined the Cardinals in 1964 as a backup catcher and general prankster. Uecker arranged to sit next to Gibson for the team photo, and suggested that he and Gibby hold hands. 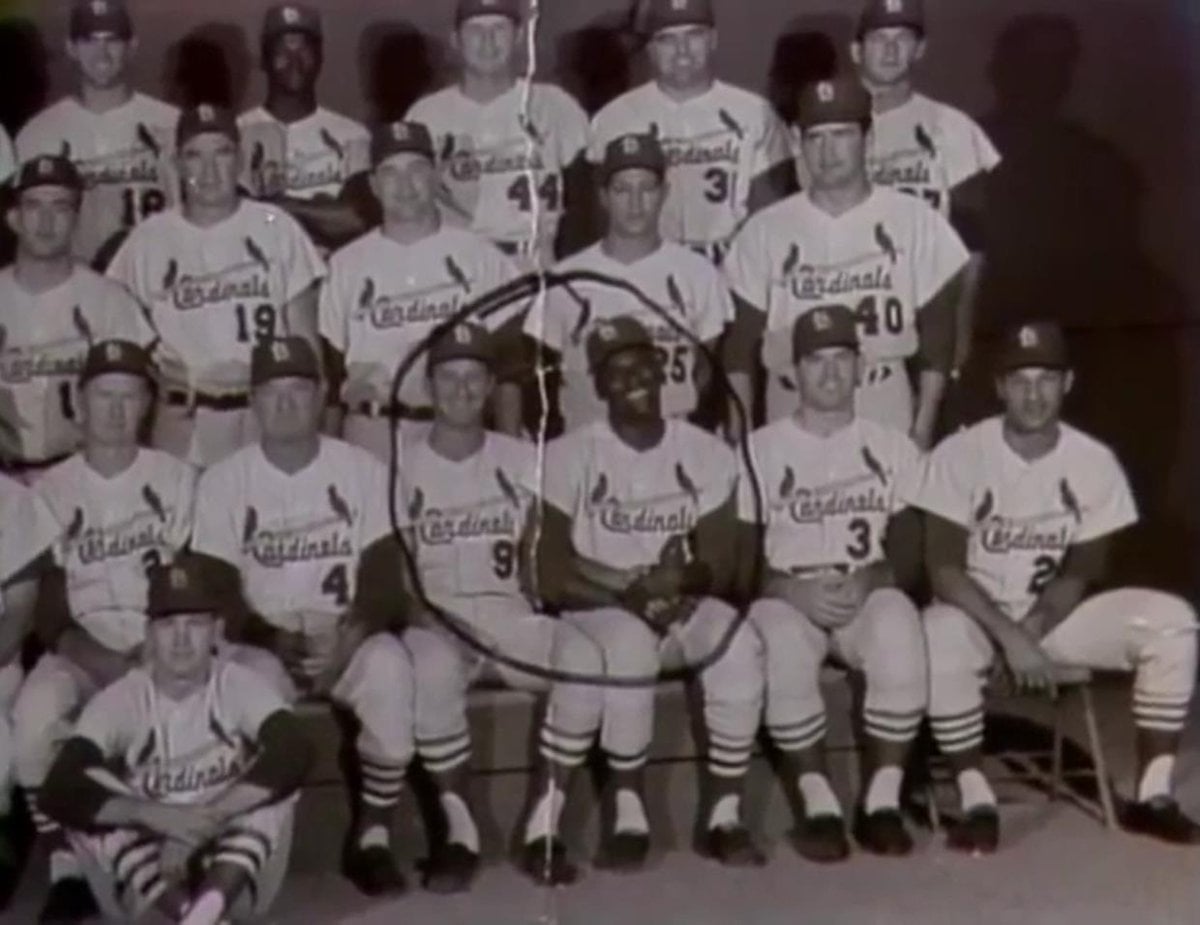 
Notice the grin on Gibson’s face. It wasn’t like Uecker had to do a lot of convincing.

When management figured out what was going on, they ordered the photo be reshot. Gibson was moved back in the new photo, and Uecker was moved even further back.

Gibson was my favorite player growing up. I had a poster of him on my wall above my bed, next to the generic Cardinals poster. I borrowed his autobiography From Ghetto to Glory at least four times from my local library branch over the years.

I did see him pitch, three times in all (I was always obsessive about my scorecards)–three complete-game victories. He allowed one run, two runs, and three runs in the three games, a nice even 2.00 ERA.

Gibson could hit well for a pitcher, too. I saw him hit a home run in the third of these games. Then there was the game in which the Cardinals trailed 2-1 in the seventh and got a man to third with none out. The shortstop, Dal Maxvill for anyone who remembers him, was due up. They sent up a pinch hitter, which made sense as Maxvill was an offensive zero, but the pinch hitter couldn’t get the run home. The next batter was Gibson, so they pinch hit for him and-- No, I made that up, they didn’t pinch hit. They pinch hit for the shortstop but not for the pitcher. It worked: Gibson came through with a game tying sac fly, and Joe Torre won the game for the Cardinals in the eighth with a homer. (Second game of a DH, Steve Carlton having won the first with a 3-0 shutout. Quite an impressive pitching slate for St. Louis that day.)

He was also a fine fielder, lots of Gold Gloves, though I don’t know how well deserved they were by modern metrics. I do remember him taking infield practice before one Cubs-Cardinals game–handled the short hop very well if I recall correctly.

Terrific player, and I’ll miss him.

He was also a fine fielder, lots of Gold Gloves, though I don’t know how well deserved they were by modern metrics.

Metrics don’t work for pitcher fielding. All pitchers come out as being replacement level, but anyone who’s seen a good fielding pitcher versus a bad one knows that might actually be the position where there is the BIGGEST difference between good and bad fielders.