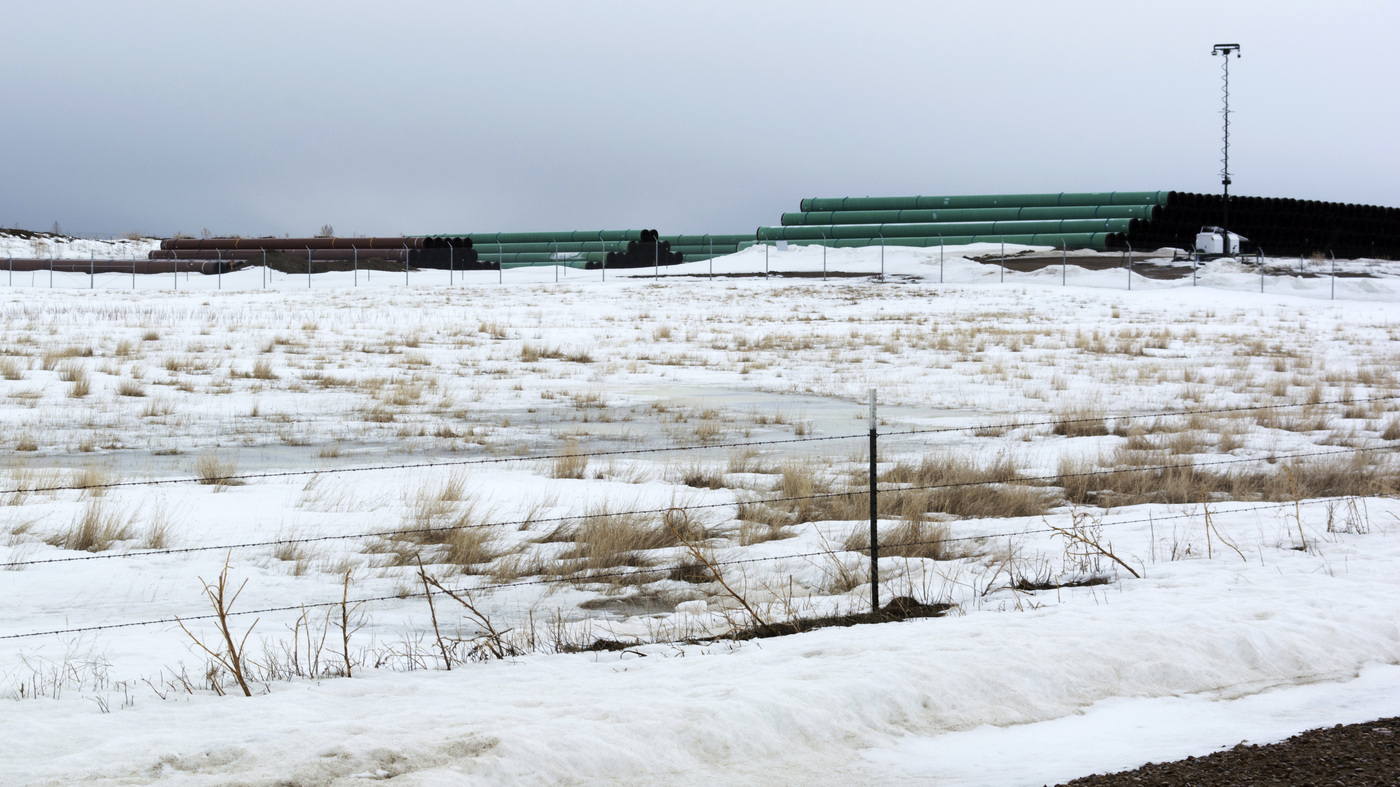 TC Energy suspended construction in January when President Biden revoked a key permit. The controversial project was a major flashpoint in the debate over fossil fuels' role in climate change.

Or, just maybe—crazy idea here—we should start restructuring our economy to not be dependent upon oil, and especially foreign oil…the way we should have started doing thirty years ago when the end of the Cold War provided that famous “Peace Dividend” now that we didn’t need to spend hundreds of billions on weapons and war materiel, or fight proxy wars in far flung locations around the globe.

Well, it was a nice idea for the five minutes it lasted, anyway,.

Was that before or after they’d gone through that reservation?

I thought they decided this back in February??

The market is not taking this as news: Canadian National Railway (carry much of the oil) slightly down today and in after hours.

They finally gave up when Biden’s cancelation wasn’t changed.
It probably takes a while to shut things like that down.

Looking it up they announced right away but now confirmed that it’s for keeps.

Anyway as the comment about shipping by rail instead …

Tar sands oil is not only thicker, more corrosive, and needing more processing - it is more expensive to get out of the ground and made into gasoline than the lighter stuff. Rail (which has only so much capacity) costs more than running through a pipeline would and that makes it a less attractive business. Adding more expense will very likely mean less (previously planned) additional investment as it is less attractive. Some current investment may even end up abandoned competing against cheaper higher quality stuff.

Plus not getting the certainty that rail is more damaging. Yes you have to use energy to move the trains, but a leak of this corrosive stuff in the pipelines, that could be undetected for quite a while per many of the experts, seems a more likely catastrophic event, than a similarly large railway related spill.

what a lot of people miss is the fact that except for the oil and pipeline companies and politicians (cause jobs!) no one wanted it in the first place

I still think oil will be around for longer than many want. Canada remains a big country with extreme temperatures.

Well with that being the case we’ll want to save tar sands oil for last. It’s not good oil.

Why don’t they build a refinery for the tar sands oil there in Canada closer to the source?

Cite? Pipelines create massive environmental damage during construction, and then during operation due to leaks. Trains can create spectacular disasters when tank cars derail, but oil spills from pipelines tend to be much more massive. The data seems to show train transport being environmentally less damaging. The Keystone XL pipeline, furthermore, posed a major threat to the Ogallala Aquifer.

Beyond all that, this pipeline expansion represented many billions of investment in infrastructure whose sole purpose was to facilitate an obsolete and environmentally disastrous source of energy. As a Canadian, I’m aware that this decision is going to have a negative economic impact on Alberta and on the Canadian economy overall, but there is no responsible course of action other than supporting the cancellation as the right thing to do. It’s unfortunate that so much of our economy is dependent on oil. We should have started diversifying our energy industries a long time ago.

Well to transport oil by pipeline you are going to use electric pumps–and electricity hopefully will become overwhelmingly renewable in a few years–while trains run on diesel which contribute to global warming. I would expect the number of btus of energy to be much less for pipelines–as you are just moving the oil–not the tank cars and also considering the lower efficiency of diesel engines vs electric pumps.

I wouldn’t be surprised that the economics of the situation do not warrant the construction cost. The pipeline was planned, designed, and started when the price of crude oil was in the $80-150/bbl range (2005 or so). Oil held that price until the end of 2014 when, due to a great increase in supply due to fracking, the price dropped below $80 and is not likely to return (at least with inflation-adjusted dollars) anytime soon.

Added to this is the rise in popularity of electric vehicles will lessen the demand for petroleum. Today, close to half (44% ) of the petroleum in the US is used for motor fuel gasoline. Now, electric cars aren’t going to drop that to zero, but it’s more than likely to drop it to less than 40% within the next five years, ten at most. Within 15 years, I wouldn’t be surprised to see gasoline demand drop by 25% or more (to less than 33% of total petroleum use in the US). While this would still be the largest single use of petroleum in the US, such a reduction would have a significant downward pressure on prices.

So, I suspect the money behind this pipeline have run through this analysis and determined it is just not worth is, economically or politically. I suspect history will mark this as turning point is the use of fossil fuels. Not the end, but a turning point in opening the door for cleaner and more efficient use of petroleum.

I still think oil will be around for longer than many want.

As long as it’s available, humanity will never completely move past oil - not now, not 200 years from now. It’s too useful a material. We may not be use it for fuel, but it has lots of other applications. You think we’ll ever stop using plastics?

Sure, but why did we continue to build pipelines across the border throughout the 9 year process of approval/disapproval going back to 2012? There’s a logic to what you say, but there isn’t a lot of logic to the response to Keystone XL. But it also wasn’t an issue of logic. The environmental lobby wanted a fight, generated one, and ultimately won it. I support most of the goals of that, but it is difficult to defend the specific activity around Keystone when we look at the bigger picture of other trans-border pipelines we approved during the same time window, and the fact most of this oil did in fact keep flowing just under less environmentally friendly means.

I frankly somewhat disagree with the tactic of focusing on pipelines, because I see little evidence blocking one pipeline of dozens being built to do the same thing, and taking over a decade to do it, has had a material impact on actually pumping tar sands oil and introducing it into the economy.

I get that some of it is just the environmentalist are picking the battle they can, since all the complex property rights, the role of the State Department due to crossing the border and etc make pipelines like this one of the few areas where activism and lawsuits alone might actually bring about a win. But the real changes you talk about require policy and legislation, stuff that makes companies pay for the externalities of harvesting and using fossil fuels, and specifically makes that price higher for using things like tar sands oil which are more damaging to the environment even than most other sources of oil.

Pipelines generally cause less carbon emissions in transit, which is probably what he was referring to and what is usually meant by comparing pipelines to rail. Pipeline disasters are generally bigger and more damaging than rail disasters, but oil leaks into the ground generally are not carbon emitting, it is the burning of the fuel that emits carbon, and is usually the focus of climate change advocacy.

Whether you think pipeline or rail is “better” thus may be somewhat subjective, some people are going to be more concerned about the higher damage to local communities, water supplies etc from pipeline leaks, but I think most big picture environmentalists would be more concerned about the fact that heavily using rail in the transportation adds significantly more carbon to the atmosphere due to the higher energy required to move a barrel of oil by rail versus by pipeline.

At the same time, rail scales up worse and costs more, so from an environmental tactics perspective, it may be seen as advantageous to force shipment by rail because it makes the whole business less desirable.

I’m not convinced anyone has done a holistic deep dive on it though, I’m pretty sure pipelines that cross the border were targeted because they are targetable. Due to the laws involved it is much more difficult to stop oil drilling and rail transit.

As long as it’s available, humanity will never completely move past oil - not now, not 200 years from now. It’s too useful a material. We may not be use it for fuel, but it has lots of other applications. You think we’ll ever stop using plastics?

That isn’t particularly a problem. The only really big problem with oil (and coal) occurs when we burn it as fuel, because it represents a very ancient form of sequestered carbon, and when we burn those hydrocarbons, we return that carbon to the atmosphere. Using oil products as a manufacturing material or for lubrication doesn’t present the same issues, and the quantities involved are much smaller, too. There’s probably a better way to produce plastics or similar materials anyway, but that’s a separate issue. The Keystone XL pipeline was certainly not going to be built for any of these secondary uses of oil – the volume it was designed to deliver was clearly intended for the fossil fuel infrastructure.

Why don’t they build a refinery for the tar sands oil there in Canada closer to the source?

Because building a refinery is extremely expensive (like billions) , and tar sands oil is"

Such an expensive refinery must be kept operating all the time to pay back the costs. And there is no other source of oil for it, other than shipping oil in from ports on the coast, then back out again to the customers. Not competitive with existing refineries (which are mostly at costal ports where overseas oil can be delivered, and which are already connected to pipelines for the distribution to customers).