After a trip to the old home-garden store, I was amazed by the number of product available to kill/repel/hypmotize bug.

Which products work best? These appear to be the choices:

I don’t think anything is terribly effective but here’s my take:

1 Things that attract bugs such as UV light CO2 emiters and such will attract some bugs so you need to place them away from where you are but close enough that the bugs in your area can ‘see’ it and decide to head over there. One of my neighbors had this very powerful UV bug zapper and lived about 500 ft away but in direct line of site from me. It seemed like I had less bugs then him. I think he was pulling my bugs away but don’t know for sure. You want to get a UV lamp just bright enough to light up your area but not to bright that you start importing bugs - the lable will let you know the size area it protects.

2 bug repellers - most effective (IMHO) is smoke, weather it be from a citranella candle or a campfire. The more smoke the less bugs. Sprays work too.

4 bug spray (killing type) - I don’t know how effective it is at reducing bugs but the principal is sound.

There’s a new device on the market called the ‘Mosquito Magnet’ which apparently works well. What it does is use propane to create CO2, which attracts mosquitos. There’s a tiny electric fan which draws the mosquitos into a trap once they follow the plume of CO2.

The drawback is that they are expensive. The cheapest model is $495, and you have to replace the propane cylinder every couple of months.

According to the web site, you have to start the thing in the spring and let it run continuously throughout the summer, so that it captures mosquitos that would otherwise breed in the area. So my guess is that the real effectiveness of it won’t show up until you’ve had it running through at least a breeding cycle. Not something you can just turn on for a party.
http://www.mosquitomagnet.com/

You could build a bat house on your property. Bats eat lots of mosquitoes.

For the mosquitos and gnats, an electric fan will work surprisingly well, according to my parents. The little critters (don’t know about flies, wasps or other big guys) aren’t strong enough to stick around if the air is moving, even just a light breeze.

Plus, no stink, no chemicals, no bright lights, and no annoying ZZAP! to disturb those quiet summer evenings.

To repel mosquitos, your absolute best bet is any bug spray containing deet. Anything else and you’re spending too much for too little.

Sam, where did you hear that the Mosquito Magnet works well? I’ve been considering getting one of these for a couple of months now. If it does what it says, I’d gladly pay $500, but I don’t trust the testimonials at the web sites that sell the product. Do you actually know anyone who has one?

It is my misunderstanding that the traditional UV bug-light generally attracts anything but mosquitos, until you fry enough big friendly bugs to attract some attention.

But it’s certainly more entertaining to listen to a bug zapper trying to tangle with a hobsonfly than trying to slap your way out of a swamp bloodrush. Unfortunately, each good bug you kill makes the fish in the rivers that much smaller and less healthy. Try to kill only the mosquitos.

Or is it “mosquitoes”? I’m late for my golf game.

Please, think of my bass. No, not the one getting warm next to my computer, but the one in the river. They’re your friends, too.

I read a study in the paper published recently that said that DEET is just about the only garunteed method of keeping the gits away. I have found that Off! insect coils work well. They’re like a sprial stick of incense that you light and put hear where you are sitting. Unobtrusive and doesn’t stink!

More links demostrating that electrical bug zappers based on UV light harm the ecosystem without killing mosquitoes. For example, they kill more insect preditors than mosquitoes. 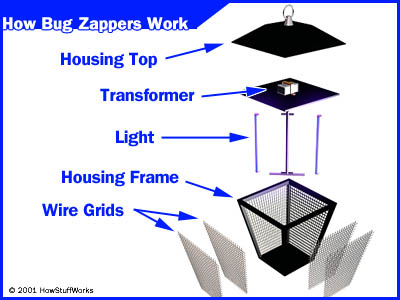 Patented in 1934, this electrically-charged invention has made a big difference for modern day picnic-goers. But in recent years it's come under scrutiny, as scientists began to question its effectiveness.

Other mosquito control methods are discussed on the following web page.

Patented in 1934, this electrically-charged invention has made a big difference for modern day picnic-goers. But in recent years it's come under scrutiny, as scientists began to question its effectiveness.

*Originally posted by CurtC *
**Sam, where did you hear that the Mosquito Magnet works well? I’ve been considering getting one of these for a couple of months now. If it does what it says, I’d gladly pay $500, but I don’t trust the testimonials at the web sites that sell the product. Do you actually know anyone who has one? **

I’ve got one. The $500 dollar one. There’s two other models that are a bit larger and cost appropriately more. It seems to work pretty well.

I live in Anchorage Alaska in some prime mosquito habitat.

Last Saturday I changed out the first propane tank after 23 days of continuous operation and had captured quite a load of the little vampires. It’s difficult to estimate their number, but I’d say a couple thousand at least.

The device traps the bugs in a little pocket shaped net with a drawstring. You’re supposed to just toss the net and put in a new one, but since I’m a cheapskate I emptied it into a sandwich size plastic bag. Without crushing their crispy dessicated bodies too much, the sandwich bag was over half full.

You could try raising dragonflies. Or preying mantises, stationed strategically around your deck railing. Either one should produce less waste than bats, who tend to shit everywhere.

Seriously though, avoid the ultrasonics. I bought one and actually watched a mosquito buzzing around it. I believe thay repel mice and that’s about it.

Owned a zapper for a while, too. Killed about a million gnats, mayflies, and one huge-ass bumble bee. And a few mosquitos too, but not a lot.

Most disinterested scientific research seems to agree that CO2 is the key. But before shelling out $500, you may want to check to see if there’s any puddles of stagnant water around…

Don’t waste your money on an ultrasonic noisemaker. If the only source of food you could find was near a jackhammer, you’d put up with the noise and eat. The critters do the same after a few days.

I’ve heard purple marlins eat lots and lots of mosquitos. You have to put up a special house for them up on a pole and bring it down and clean it out once a week so the sparrows don’t take over.

I’ve thought about a bat house or two myself but have concerns about rabies.

I’ve had pretty good success this year (although it’s not a bumper year, little rain, cleared out a LOT of brush from the back) with citronella candles and DEET spray. The trouble with DEET is is if you’re of childbearing age supposedly it can cause birth defects or something (I’ll save the research for a DEET=Birth Defects? thread).

Thanks for all the great replies. I just checked out the Mosquito Magnet device on their website. It looks like the real deal. The creator was interviewed on the Discover Channel and the thing seemed legit.

It’s pricey, but after reading about the zappers spread disease and how the other devices really don’t work too well, I think this CO2 thing is probably worth it if you have a lot of mosquitos in your yard.

Thanks for all the info!

Who cares what works. The question is “What’s most fun?” The answer to that has to be this.

Not only does the Mosquito Magnet apparently work, but you’ll be doing your bit to add to global warming! Because its exhaust is pure, sweet CO2.

Oh, man! Thanks for reminding me of the best toy I ever had, UncleBeer!