Cabinet makers: advice on making a cabinet of drawers

I have been thinking about making a fairly simple box cabinet to hold some drawers that will store fountain pens. The drawers will be wide (around 17") and shallow (1.25") and about 9" deep. For the sake of the concept, suppose there will be 10 drawers. The box frame might be 5/8" or 3/4" thick, actual measurement. The dividers between the drawers (dust panels?) will probably be 1/4" or 3/8" thick. The drawers will be quite light-weight even fully loaded. There will be no slide mechanism used, the drawers will just be supported in the space by the dust panels.

My question is, how much space should I allow around each drawer for it to slide in and out easily. is 1/16" on each side a reasonable amount? I want them to feel secure and not flop around. But I have seen videos of Japanese cabinet makers where there is no space at all, and if you push in one drawer, the air pushes out another one, and I don’t want that either.

It may depend on the humidity on the day you measure. Wood is not very dimensionally stable. Your biggest problem is the 17" width, which is not really very much. 1/16" may be enough but I jump it up slightly just to avoid problems. The 9" depth means your shouldn’t have problems with drawers jamming from lack of a guide.

These dimensions are similar to a machinist’s tool chest, a little shorter with not as many drawers. Check around for plans to make one of those.

Here are plans for a very simple chest that may help.

You didn’t specify the material. If it’s solid wood, then you should consider wood movement, although usually drawers are built with the grain horizontal so there would be minimal expansion/contraction in a horizontal direction. But your mention of 1/4" dividers makes me think you’re using plywood (which is what I’d probably use for something like this). In that case wood movement is not an issue, and I’d think 1/16" on each side would be fine. I would use at least 3/8" for the dividers though; I wouldn’t be comfortable with 1/4" plywood supporting even a lightweight drawer, especially if that’s all that’s supporting the drawer when it’s fully extended. Along those lines, are you thinking of any kind of drawer stop? Or do you not care that you could yank the drawer out of the case if you pull too hard? You might at least consider making the draw sides extend a few inches past the back of the drawer for support when extended.

These dimensions are similar to a machinist’s tool chest, a little shorter with not as many drawers. Check around for plans to make one of those.

That was my very first thought as well, TriPolar.

There is some similarity to a machinist’s chest, yes.

I am not planning drawer stops, I want to be able to easily pull the drawers out all the way.

As for material, I think I was going to use solid wood for the outside of the case, and plywood
for the dividers.

Your biggest problem is the 17" width, which is not really very much.

I don’t quite understand this. Considering the height of the drawers, I thought 17" was a reasonable width. It’s intended to be a small cabinet.

Anyway, thanks for those plans, I’ll study them to see what I can learn from them.

I don’t quite understand this. Considering the height of the drawers, I thought 17" was a reasonable width. It’s intended to be a small cabinet.

Those are the largest pieces of wood that would expand the most. In this case that’s not much at all, I’m dismissing it as an issue.

Regarding those plans, they appear to be allowing 1/2" total for the four horizontal spaces between drawers and between the top and bottom drawers and the case. That’s 1/8" for each horizontal gap. For the sides, they appear to be allowing 9/16" for each side of the drawers, which doesn’t really match the photo. (I take this from the difference between the width of the cabinet front and the drawer fronts, divided by 2.) I’m not sure what I’m missing about the width.

Anyway, I can compromise at 3/32" for the horizontal gaps, if I can get that precise. Those drawers are bigger than mine. Maybe 1/8" for the gaps at the sides.

For the sides, they appear to be allowing 9/16" for each side of the drawers,

Just read that the same way. I wouldn’t trust that cut list.

I would leave the dividers out and just glue on 1/4" drawer guides, cut the faces to have a close fit.

What is the advantage of that approach? (Yes, machinist’s chests seem to be generally built that way, but is it just because it is easier and more economical to build? Or is there another reason?)

These guys make something similar to what you’re taking about, just reduce the scale: 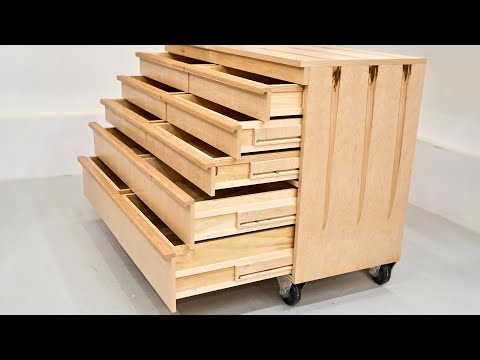 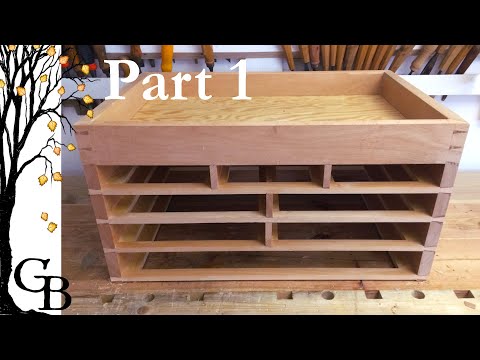 If you look at jewellery boxes as well, they’re basically the same, just omit the lid. 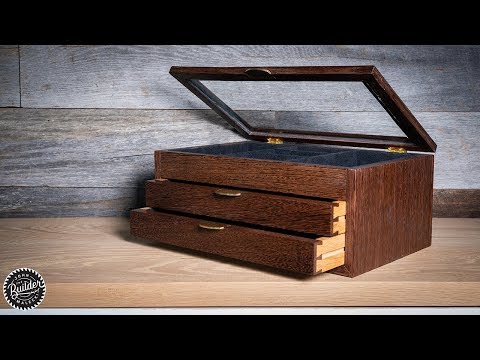 This is good, the other option to consider is veneered plywood.

If you look up wood retailers in your area there should be specially places that offer a good selection of veneered products. There is one near me that offers plywood with any type of veneer you could imagine, cherry, oak, maple etc.