Can a six foot high plywood "fence" prevent cats from jumping over?

Long story short I have some cats I need to take care of, about 4 of them. They can’t be indoors since I already have an in-door cat and he doesn’t like strangers, but I also don’t want them outside and possibly getting hurt. I have an backyard covered patio with wooden frame and plastic windows on all four sides except for a 10 foot wide section that is completely open to the elements that you use to access the rest of the backyard. I was considering for the time being going to a home improvement store, getting a six foot tall by 12 foot wide piece of plywood, and tying it to the opening with ropes to create a stable but still temporary (though temporary for a few months) open area for the cats to play in and get fresh air but also so they can’t escape.

I don’t want to go higher than six feet since I still want to be able to look over it into the backyard, but also be able to slide it across if I have to access the backyard at any point. I read online most cats can’t jump higher than five feet so six feet seems high enough. Is this high enough? Would the single plywood piece of wood be too heavy? Any other suggestions?

An active cat could easily scramble up 6 feet of plywood. They don’t have to jump that high from a standstill as they can get some purchase from their claws.

Some cats can jump higher than 6’. I had one cat that could jump from the floor to the top edge of a door. And with plywood a lesser jumper could scrabble up as long as their front paws made it to the edge, which I think most cats could do easily.

Wouldn’t blocking the opening with some kind of mesh be a better idea? That way you could still see out.

I know there was quite a bitter debate about how high animals can jump right here on the board, many years ago (and before video platforms really took off properly, so it wasn’t easy to find examples).
A fit, adult cat can easily jump high enough that it can hook its forepaws onto the top of a 6 foot barrier, directly with no scrambling.
In practice, a cat will generally also get a boost by hooking into (or just good frictional contact upon) the vertical surface of a post or board and doing a sort of ‘scramble assist’.
An exceptionally fit adult cat can jump the whole distance (that is, jump and alight at a height of 6 feet, rather than just jumping high enough to grab and pull up)

Wouldn’t blocking the opening with some kind of mesh be a better idea?

This is probably a better idea. You’ll need to fasten the netting at the bottom (2x6 along the bottom, perhaps) and at the sides. If possible, you should fasten it at the top as well, as they will probably try to climb it. My neighbor has netting on both balconies to keep the cats from falling out, similar to this.

Great idea, but what would be an easy way to get it firmly attached, that was my original plan until I thought about the cat’s scratching at the bottom or sides and getting through.

There seem to be plenty available online, and some say they come with fastenings. Eg: 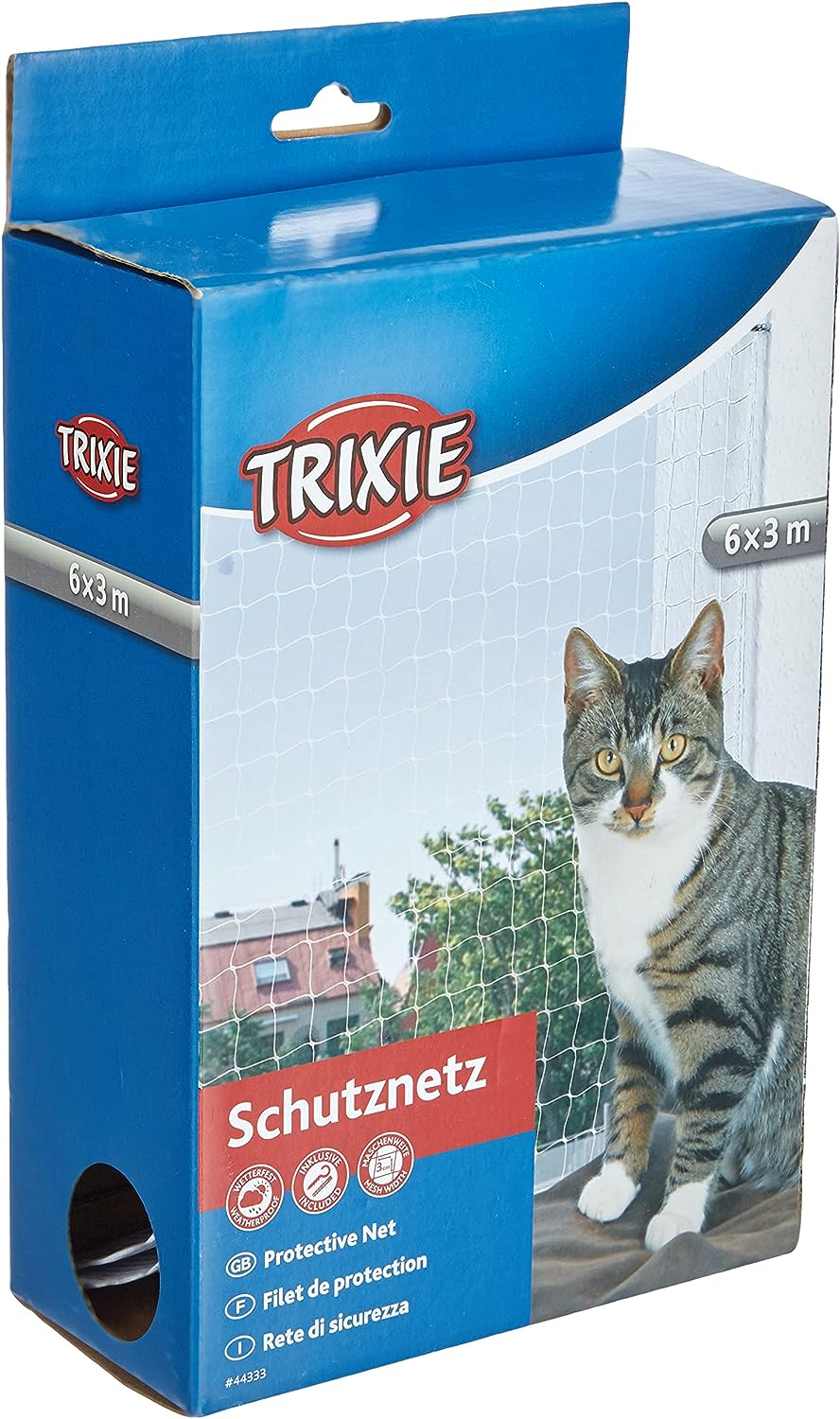 Just make sure you won’t make it worse for them trying to help them. Cats need the ability to escape predators, and some of them can fly.

But as for your question, they can most likely jump it, but won’t as they can climb it.

With any luck, they’ll teach your cat to become a shoulder cat.

Cats need the ability to escape predators, and some of them can fly.

Really? Maybe it’s the flying cats that led to such heated debate about how high they can jump.

I had a cat who liked to sleep in our screened in porch. One fine evening a Tom cat came around and he head butted open a screen panel, it just ripped open and in sauntered Tom. Scared me to death, freaked out my cat

If cats had thumbs we’d be screwed over.

Cats need the ability to escape predators, and some of them can fly.

Really? Maybe it’s the flying cats that led to such heated debate about how high they can jump.

I presume what’s meant is that some of the creatures which eat cats can fly. Cats hunt little birds, big birds hunt cats.

In some areas there aren’t any birds big enough to take most adult cats; but kittens, or unusually small adults, may be at risk even there.

I had a cat who liked to sleep in our screened in porch. One fine evening a Tom cat came around and he head butted open a screen panel, it just ripped open and in sauntered Tom.

Not all modern screen materials will stand up to a cat who wants to get through them. You need old-fashioned metal screening; or something made for the purpose.

And joining in the chorus: it depends on the cat, but lots of cats can get over a 6’ fence. You need to cover the top of that outdoor space as well as the sides; and to cover both with something sturdy enough that the cats can’t rip it. My parents, years ago, had an enclosure made that used, IIRC, chicken wire over the top and small-opening chainlink fence for the sides.

As the factual question has been answered, and this thread is turning into advice, i am moving it to IMHO.

I presume what’s meant is that some of the creatures which eat cats can fly.

…kittens, or unusually small adults, may be at risk even there.

But I don’t believe a bird could fly off with a small adult, maybe an unattended baby or a toddler.

Great horned owls routinely prey on skunks. They are happy to take housecats, including fit, adult, cats, when they have the opportunity.

Fishers (sometimes called fisher cats, but really a large weasel) also like to eat cats, and they climb very well. They are one of the few mammals that comfortably climbs down trees, headfirst.

I have taken a cat on an airplane. The cat found it much more disappointing to be a flying cat than to be a staying-at-home cat.

I had a cat that could fly. Flying bugs didn’t survive long in our house.