Can you explain this sun rising photo? What's it depicting?

This is a composite photo of the sun set Dec 5 and Feb 18. I understand the sun is further to the right.

The caption says it’s shifting Northward? Why is it doing that?

Will it continue shifting to the right throughout the year? Where would it be in August? 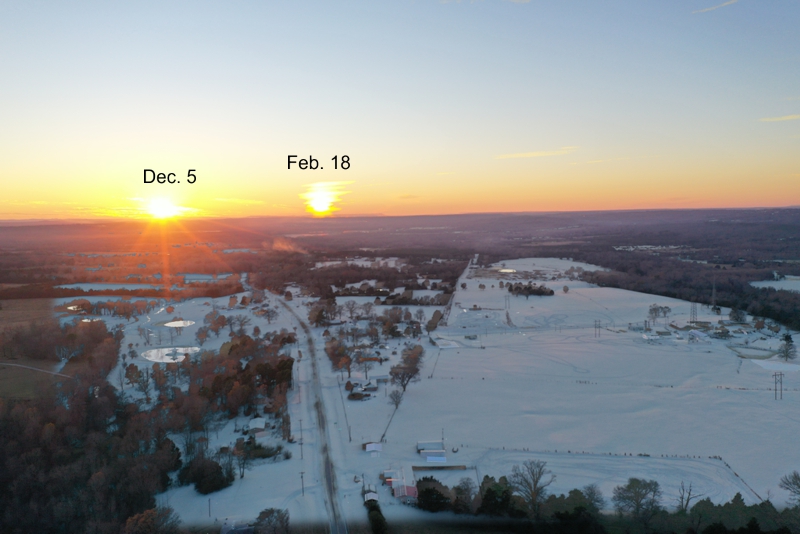 Title is wrong. This is a sunset. I’d love to see a composite showing the movement throughout a full year.

The caption says it’s shifting Northward? Why is it doing that?

The sun rises, generally, in the east, but in the northern hemisphere, particularly as you go further north, during the winter months, the sun is in the more southern part of the sky. It rises in the southeast, and even at noon, it’s not directly overhead, but is still in the southern half of the sky; it then sets in the southwest. This is most extreme at the winter solstice (December 21st or thereabouts).

By the time of the spring equinox (March 21st, more or less), the sun will appear to rise at due east, and sets at due west.

I’ve never fully understood the sun’s movement. I’d assume this composite was at the same time of day.

I have seen timelapse video of a sunset and sunrise. It’s pretty cool to see an hour go by in 2 minutes.

I’ve never fully understood the sun’s movement. I’d assume this composite was at the same time of day.

It appears that the pictures were taken at the same time, relative to sunset (i.e., 10 minutes or so before sunset), so that you can see the sun’s position at, more or less, the same “height.”

That’s a good point. The sun wouldn’t be at the same height at 5pm on these two dates. Sunset varies a few minutes each day.

I’ve noticed that on the weather forecast. They state the sunrise and sunset times for that day.

I’d love to see a composite showing the movement throughout a full year.

Here’s a site that plots it all out visually for you.

You can put in your own location, it defaults to Manhattan as an example at 41deg latitude in the N hemisphere. Scroll down below the photograph to the circular graph. This plots what @kenobi_65 has described. At the winter solstice, the sun rises and sets at bearings of 120 and 240, i.e. a full 30 degrees S of due E and due W. At the summer solstice, it rises and sets at bearings of 060 and 300, similarly 30 degrees into the NE and NW part of the sky.

If you’re planning to use the sun to navigate, it’s vital to look up this information before you set out.

Thank you for the links. I’ll check them out.

When people say that Stonehenge (or various other archaeological sites) is an “astronomical calendar”, this is what they’re referring to. There are pairs of stones or other markings aligned such that when sunrise, or sunset, is lined up with those markings, it’s a particular date. Most of the alignments of Stonehenge are lost to history (there are so many stones, that the pairs of them line up all sorts of different ways), but the main axis of the structure is lined up with the summer solstice.

A more obvious one is found in Chaco Canyon, Arizona: There, there’s a stone structure where the shadow of the edge of a doorway falls on a flat wall opposite it, and there are a number of marks on the wall for various important dates.

That amount varies throughout the year. It’s greatest at the equinoxes, and approaches zero at the solstices.

A more obvious one is found in Chaco Canyon, Arizona

There is also the common related mechanism consisting of a wall with a node in front of it and a figure-eight analemma (for mean time) or just a straight line. The moment the shadow of the point falls on the line, it is precisely noon.

I’d love to see a composite showing the movement throughout a full year.

analemma: shape traced by the sun at the same time every day over the course...

As an architecture undergrad we often used sun path diagrams to see where the sun would be throughout the year for a specific latitude. Very useful for orienting the building to block or take advantage of the sun angles. You could design overhangs to provide shade all summer and let the sun in all winter.

Yep- basically as the Earth’s position changes as it orbits the sun, the axial tilt appears to change from being tilted away from the sun (i.e. less direct light and heat, winter), to being tilted toward the sun (more direct light & heat, summer).

Understanding Astronomy: The Sun and the Seasons (weber.edu)

By the time of the spring equinox (March 21st, more or less), the sun will appear to rise at due east, and sets at due west.

Yes. The valley Phoenix is in is flat enough that the big streets (Main Milers we call them) are following the Range and Township lines and are thus, running due north-south and east-west. My brother lived west of where he worked and for about a week on either side of the equinoxes would be fairly blinded driving home – going to work was late enough the sun was well up.

I was smart lucky enough to live east of work and escaped that.

Anywhere on the globe, at any time of day, the Sun will be furthest north in June, furthest south in December, and about midway in between in March and September.

Since your post was in all other respects so precise with the correct specifics and generalizations, just to note that you should have started your second paragraph with “In temperate northern latitudes…”.