Can you ID the (military?) uniform in this antique photo?

Someone I know found this old photo among their stuff. I’m intrigued by the subject’s uniform and am hoping someone here can recognize it or steer me to a site that could help me figure it out. (Google image search was not helpful.)

Was he in a military band? National Guard? And in what era? What about the doo-dad on the kepi-style cap and the dark stripe down the pants? Or is this a US uniform? I can’t make out the insignia on the arm.

Also, the photo is printed on wafer-thin metal. The back is shiny black. I’ve never seen an old photo that was printed on metal. Why would this not be on cardboard stock? (If it’s pasted on, I can’t tell. It’s very thin metal, thinner than a credit card.)

Any military history buffs on the Dope who can help me?

My WAG is a band or a military school.

The French and Us had a hat something like that, but I looked at all the French uniforms 1860-90, and didnt see it.

As for the USA, the hat was different. 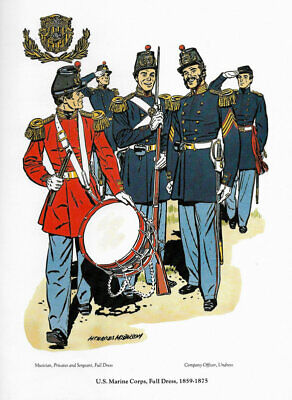 They have been printed on good quality paper, and the colors are between matte, and semi-gloss.

But I admit I am not really an expert here.

The bit on the cap is a pom-pom. In the nineteenth century, it was a pretty common decoration for a parade uniform. It still is for fancy marching bands. Feathers and plumes are also common. The dark stripe is, well, a stripe. It has different symbolism in different services. It can indicate cavalry, or distinguish officers from enlisted. It can also be added to a uniform just because it looks cool.

Why would this not be on cardboard stock? (If it’s pasted on, I can’t tell. It’s very thin metal, thinner than a credit card.)

The early chemicals were very potent and paper didn’t last long because of them. A tintype, also known as a melainotype or ferrotype, is a photograph made by creating a direct positive on a thin sheet of metal coated with a dark lacquer or enamel and used as the support for the photographic emulsion. Tintypes enjoyed their widest use during the 1860s and 1870s, but lesser use of the medium persisted into the early 20th century and it has been revived as a novelty and fine art form in the 21st. Tintype portraits were at first usually made in a formal photographic studio, like...

It looks like a military school uniform to me, perhaps a military boarding school. There were a lot of them in the 19th century, though not many survived into the Vietnam War and beyond. The patch on the arm celular be some form of cadet rank insignia in that case. It was common for such military schools to have their own largely made up ranks, often consisting of variations on chevrons and stripes. In fact USMA and the most notable senior military colleges at the state level still do. I don’t know if any of them using thy particular rank, but then they have changed over time and other military schools would have been free to adopt their own.

I’d be curious to know what state this picture was found in (or more precisely what state this family originated from, if known), just on the office chance that neither the photo nor the subject of the photo travelled far. That might at least yield a dozen or so defunct military schools to look into.

The photo was found in Illinois, but I think a few generations lived in Michigan and before that, Pennsylvania and, I assume, other places. The owner doesn’t know much more than that. And maybe it’s not even an ancestor.

I used a magnifying glass. That insignia is a diamond within a diamond on a diamond patch attached to a larger diamond patch. (“Patch” may not be the right word. I know little about military insignia.)

I’m guessing ASL_v2.0 is right, and it’s a military school uniform, but I can’t find any with similar insignia. I don’t think it’s a marching band uniform because the hat isn’t quite right. I mean, the pom-pom or doo-dad might be, but all the 19th century marching band photos I saw showed stiff hats. I think that style is called shako? Anyway, not like this one.

Thanks much for the info, @mikecurtis. I should have thought of tintypes.

Assuming it is (or at least might well be) from a defunct military school, just to give you an idea of the scale of the problem, here’s a list on Wikipedia with what looks like a few hundred entries:

List of defunct military academies in the United States

This is a list of military academies in the United States which are now defunct. Some of these schools have been absorbed into other organizations, or continued under changed name.

…although I could have sworn, back when I was interested in such things (having attended a still-functioning military college in the vicinity of several now defunct military high schools and prep schools), that there was a website devoted to such places. But not sure if it still exists.

Was he in a military band? National Guard? And in what era? What about the doo-dad on the kepi-style cap and the dark stripe down the pants? Or is this a US uniform? I can’t make out the insignia on the arm.

One other thing I’ll add, as another example of something that steers me towards “military school,” is that the black vertical stripe along the pant legs is common among military school uniforms, particularly when the pants are otherwise gray. But then of course many such uniforms have their origin in earlier US military uniforms. It’s just a stripe. Same thing with the plume on the kepi-style cap. Not knowing the school (if it is a school) it’s hard to date it because many of the older schools dabbled in kepis for a time, perhaps following the trend of the US military proper in the latter half of the 19th century, but then switched back to the older shako-style headgear (and why not? you can stick a bigger plume on a shako and not have it look out of proportion to the cap!). Pennsylvania Military Academy, for instance, seems to have dabbled in kepis at some point, with and without the plume, but again probably many schools wore similar headgear at the time. And obviously the uniform is very different from the PMA uniforms shown there (but uniforms, too, sometimes did a back and forth, and at my own school I’ll note there was a period of time late in the civil war and its immediate aftermath when the uniforms got unusually plain, dropping down from three rows of shiny brass buttons to one or two–or no shiny at all!).

And then some military schools have always had plainer/less outlandish uniforms. And the Texas A&M Corps of Cadets has, for instance, always looked absolutely ridiculous and should be ashamed to call themselves a Corps of Cadets.

None of which answers your question. But may at least give you some closure, if closure can be had from learning that the answers you seek may be unknowable absent a clearer photograph or some biographical details which wouldn’t be fair to ask for on this forum (particularly since you’re saying it’s from another family’s collection). To be clear, I’m not asking for more details. Just saying there doesn’t appear to be a smoking gun with what’s available.