I originally did link to an article. I don’t know why it isn’t in my post. Anyway that was mentioned in the article.

The header tank in the nose already fills the space, and because it’s there for weight and balance it can’t be moved. It’s also just LOX, isn’t it?

The LOX header is in the nose. The methane header is at the common bulkhead between main LOX and methane tanks. Neither can be moved, as you say.

An early rotation might not help if the sloshing collapses the ullage. In fact I wonder if there’s a chance of the tank itself collapsing due to outside pressure, something like this: 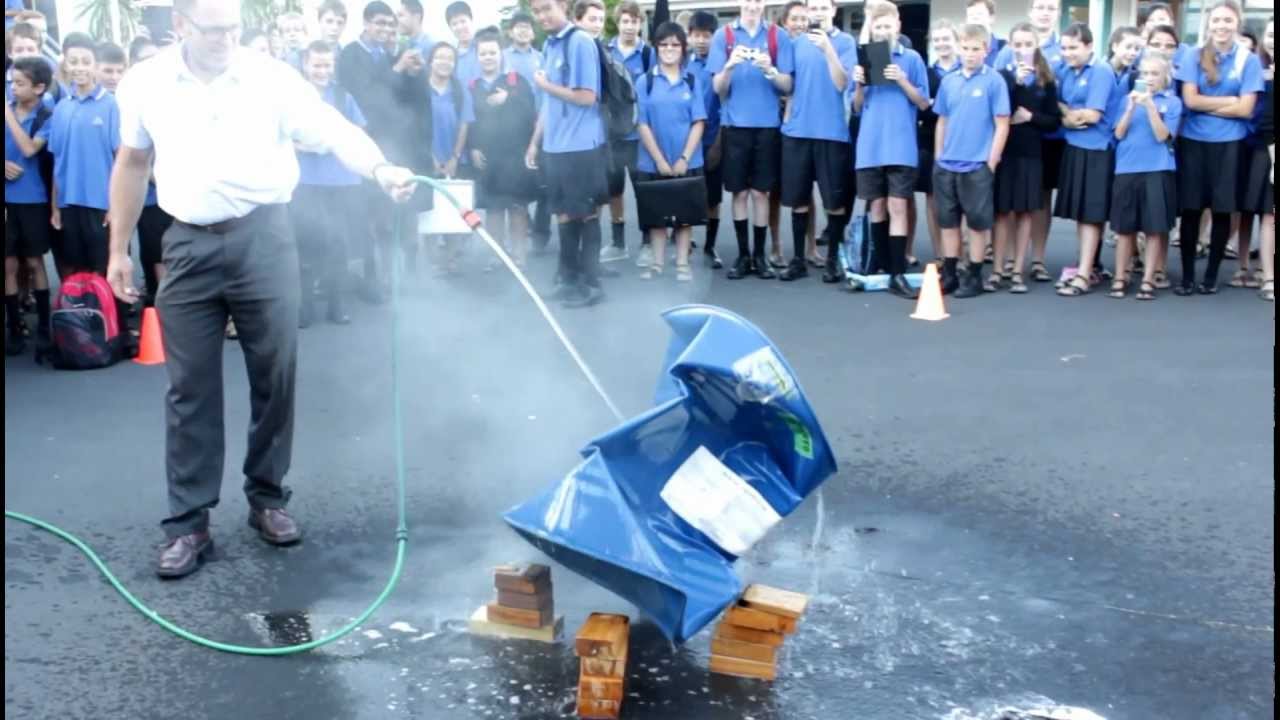 As long as we’re imploding things: 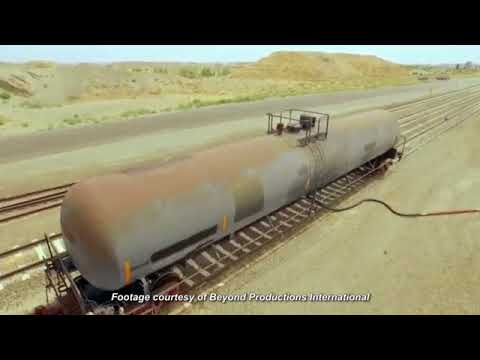 According to this: Starship SN11 | Medium Altitude Test Flight | Everyday Astronaut SN11 may launch on Saturday. 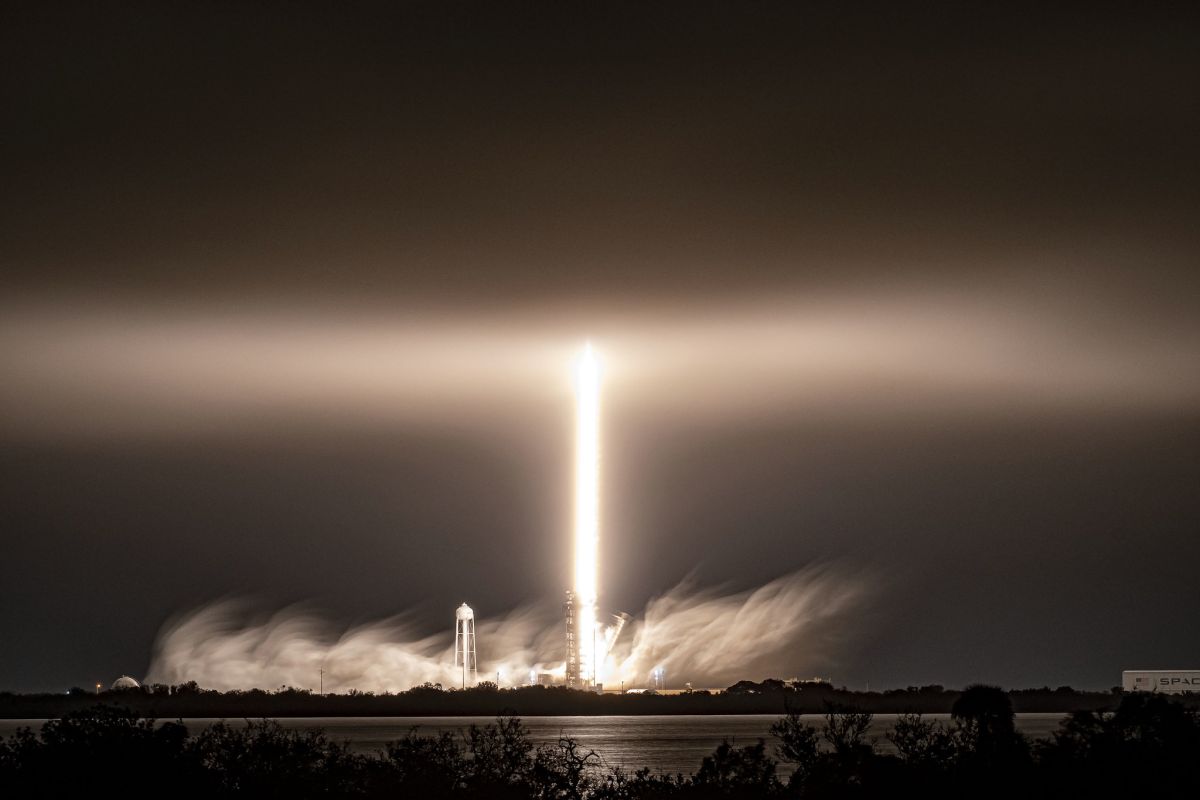 Falling SpaceX debris puts on a light show in the sky

If you live in the U.S. Pacific Northwest, you may have seen a strange meteor streaking across the sky Thursday night (March 25). But that was no chunk of asteroid or comet — it was likely SpaceX debris falling and burning up in Earth’s atmosphere, experts say.

SN11 launched OK in the fog, and climbed to ~10km.
Successful belly flop. Sometime during relight – kaboom at +5:49
NASASpaceflight recorded some debris landing.

I am baffled why SpaceX would carry out a test flight in zero visibility. Looks like the rocket exploded, taking out all the vehicle data, while ground cameras were totally obscured.

I wonder how much usable data they will get out this?

Starship is streaming back thousands of channels of telemetry constantly. None of that requires recovering the vehicle, and a long-distance camera feed tells them nothing that the telemetry doesn’t.

As an aside, amateurs have had some success in capturing and decoding Starship telemetry:
https://www.r00t.cz/Sats/Starship

The good stuff is probably encrypted, though.

Well, the telemetry only works until the anomaly.

There is a LOT you can learn from cameras and video - which is why every rocket launch has cameras everywhere. For example, the failure of Challenger’s side booster O-Ring was discovered because of the visible jet of flame coming from the area before the explosion.

Even visually recording the explosion itself can sometimes tell you things that you’d never get from telemetry, such as where the weakest points might be on the rocket.

I’m not saying you can’t get good information with telemetry, I’m saying that there is also information to be had visually, and it seems odd to forego that rather than just wait a couple of hours for the fog to dissipate.

I did hear the SpaceX announcer say that the critical part of the test today was the transition to the ‘skydiver’ orientation. That’s been successful every time, but maybe SpaceX knows aomething we can’t see, and it concerns them. So one answer could be that they knew they weren’t going to land successfully anyway, but needed the flight to work out the aerodynamics at 10k. Maybe they didn’t want to redesign the gear for Sn11, so a successful landing wouldn’t happen, so they didn’t care about ground fog.

But it still seems a bit reckless to me. The goal of test flight is to gather as much information you can, from every source you can muster. And if there had been an emergency (say a fire caused by falling debris), you don’t want to deal with it in zero visibility.

It wasn’t zero visibility. And the on-vehicle cameras were mostly working.

Rumors are that the flight termination system engaged. That would explain why it didn’t even make it to the ground. If the skydive wasn’t working quite as planned, maybe the vehicle left its descent corridor and had to be destroyed.

Although a landing would have been nice, SN11 was the last of the first series of Starship vehicles. SN12-14 no longer exist, and SN15 will be the first in the next series, with lots of improvements. Allegedly, the Raptors have also undergone a series improvement that requires a new thrust dome, and the engines on SN11 were basically the last examples of the previous model. So really I’m not sure that SpaceX cared about SN11 too much overall. Not that I think the crash was intentional or anything, just that their focus now is on SN15.

“Hard start”, in understated aerospace-speak, means “the combustion chamber had too much propellant in it before ignition, and so upon ignition it exploded”. Hard starts can be caused by leaks, problems with the start sequencing, a malfunctioning igniter, etc.

SN15 is next off the rank and apparently boasts over 100 improvements, including to the engines. Hopefully we will see more reliability.

I’m a few chapters in and it’s a good read. So far it’s the most in-depth look at the personalities aside from Musk that I’ve seen (Ashlee Vance’s biography covers Musk). So if you’re interested in Hans Koenigsmann, Gwynne Shotwell, Tom Mueller, and a bunch of others, Liftoff covers them all. Some crazy times back then. Berger seems to have done his homework and researched the heck out of it, too. Some of the stories I’d have a hard time believing if they came only from Musk but even the wilder ones are corroborated by several people.