Could a ringed planet be habitable?

Been looking at pictures of Saturn lately, and I’ve been wondering. Assuming that it was an earth-like planet and us humans were padding about on its surface, would it be a habitable planet, or do rings lose material to the planet below, causing unpleasant effects upon those on the surface?

Whatever forms the rings could be pretty devastating to life on earth, but if you can get them into place without mucking things up down here it wouldn’t be so bad.

This video shows one possibility of what they would look like: 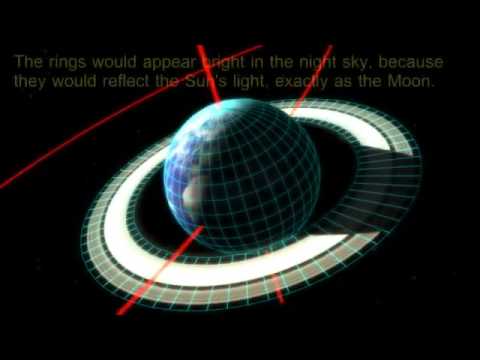 The Bad Astronomy website has a lot of info:

What if Earth really did have rings?

What if Earth really did have rings?

How would this affect life on Earth? They would be more than just pretty features! The shadow they cast would change the amount of sunlight reaching the ground; in the northern hemisphere summer the Earthring shadow would be cast on the southern hemisphere (where it would be winter), and vice-versa. That means winters in both hemispheres might be somewhat colder. Plants would have to adapt to the lessened amount of light. The actual diminution of light would depend on how wide and how thick the rings are, too.

If life evolved, it would do so in ways consistent with the prevailing conditions.

For example, the evolution of life occurred on Earth, in spite of its Moon. which influences conditions on Earth. In fact, it is argued that life as we know it would not have evolved on Earth absent a moon, because periodicity of oceanic tides enabled favorable reproductive cycles to occur in early marine creatures. But it would be difficult to defend the argument that without a Moon, life could not have evolved on Earth. It would have just had to evolve through a different set of experiences.

Oh, cool. I didn’t think of poking around the BA site.

The reason the rings of Saturn are so prominent and relatively stable, IIRC, is that they have “shepherd moons”. Small moonlets along the edges of the rings help herd the tiny particles that make up the rings. If some bits slow down, they would spiral inward until they approach this moonlet. as the approach it from behind it on the outside, it’s gravity will give the particle a boost to send it back into the ring.

the rings themselves are relatively tiny particles (every new story I see, they get smaller). IIRC, they are more like dust or pebbles than asteroids. As a result, they would not do much to impact life - either they are shepherded and don’t impact, or there’s a spectacular nightime show for a few million years until the rings are gone.

Considering the axis tilt, there would also be a swath of shadow during certain seasons. I wonder how much havoc that would play with the weather during the seasons.

If the Earth had rings, would they be visible from the ground? Aren’t the rings above the “sky”?

There is no “above the sky”. The sky goes all the way up. Just think, the Moon, Sun, and stars are all visible, aren’t they?

Would they be visible during the day, or only at night?

Would they be visible during the day, or only at night?

It depends on how dense they were. it they were not very dense then not much light would be reflected and they might get washed out like stars are. Or they could be dense and very bright and be visible during the day like the moon.

Oh, ok so it’s more a matter of brightness than location. I was wondering if we could put aluminium flakes into orbit and make rings of our own.

Oh, ok so it’s more a matter of brightness than location. I was wondering if we could put aluminium flakes into orbit and make rings of our own.

“But dear! It’s the biggest ring of all!”

The analysis on this page seems indicates that a ring system around the Earth would not be stable in the long term
http://www.astroscience.org/abdul-ahad/earth-ring-dynamics.htm

if there are millions of Earth-like planets out there in the galaxy, a small number of them could have temporary rings, but long-term persistent ring systems are probably vanishingly rare.