I think GQ is the right forum to ask this. If not, I’m sorry. I couldn’t figure out where else to ask it.

I have a Athlon X2 4600+ cpu in my computer case. It has a gigantic heat sink with fan and another case fan. It has been having overheating issues and shutting down on me for a couple of weeks, now. I had to pull the case out from under the desk, take off the side and have a desk fan blowing on it to work on it for more than 15 minutes. In fact, now it seems to work fine, but I don’t like having my computer’s guts exposed to the world like that.

Any ideas on how to address the cooling issue?

The case also has two case fans, but that doesn’t seem to be doing it.

Also, while trying to see if one of the case fans was working, a bundle of wires slipped and the wire tie hit the fan on the CPU heatsink and broke a blade. Now I need to replace it, but I’m not sure which heatsink/fan combo to go with. Would either of these work? 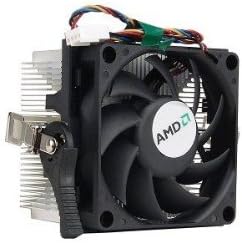 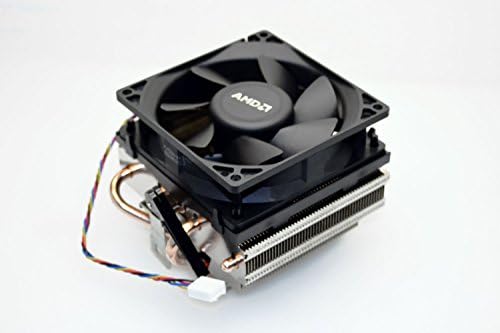 Are there better ways to keep the processor cool? I eventually want to upgrade, but I figure anything more powerful than this will need a better cooling solution.

This is what I use:

With that I can OC my proc from 3.4 to 4.8 and be stable all day long. So if you’re not OCing your chip then it should work no problem for you. It also comes with many adapters so you can move it from case to case and from chip manufacturer to manufacturer as you upgrade your system.

Hi there,
I’m using the 5600 x2 processor so similar to you. I found the stock AMD cooler to be very noisy so replaced it with a nice big Zalman cnps9500 cooler. Bigger fan and greater exposed heatsink area = a quiter system. It is pricier than the stock AMD, but bought new comes with some excellent thermal paste which it’s vital to apply, no paste and your cpu will either throttle back or just shut down to protect itself.
Now you have the side of your machine off it might be a good idea to gently clean your case fans and clear out the lurking fluff as well.
Peter

The first thing I did was clean out the computer of all the dust and lint and such.

Since I broke a blade on the CPU fan, I need to replace it anyway. I’m looking for the best way of doing it without spending too much.

I like the thermaltake cooling system, but it is rather expensive and I am very wary of running liquids in my case. I’ve looked through some of the liquid cooling systems on amazon and there are all sorts of reviews mentioning leaks. So I am worried about that.

I do like that Zalman fan, though. About how hot does your CPU run with that?

Too late for edit:

The case cover has a funnel or tube type thing that looks like it should provide fresh air to the cpu fan. Will I have to remove that to use something like the Zalman fan?

Hi again,
just checked the cpu temp and it’s running at 40 degrees, apparently the max temp before it ‘goes on strike’ is 70 degrees so I’d expect something similar with your 4600.
The cooler has an arrow marking fan air flow direction so if you can angle the funnel to the input of the cooling system I think that would be most efficient. I installed a nice slow running 140mm fan the other side of the fan to take the hot air out of the case, Speedfan is a nice little utility to monitor various temps, HDDs, Graphics, CPU etc.
Incidently the Zalman also has a cabled fan speed controller which you can run and use outside the case.
Peter

Shadowfyre, you did the right first step by cleaning out the case of dust and lint. Did you also make sure the heatsink is clean? You should be able to see the areas between fins are clear of dust/debris as well. That’s probably the primary reason for overheating CPUs in my experience.

Now, you’ve been talking about replacing the heatsink/fan unit, but I’m not sure that’s necessary myself. If you used to have acceptable cooling performance, you should be able to get back to that level. You can almost always replace the fan independently of the heatsink for much less money and possibly an easier install as well.

Here’s what I’d do:
-First step is to make sure the fins are clear, as mentioned above. You can take the CPU fan off the heatsink for better access, generally by removing four screws at the corners of the fan.
-If the fins are clean and clear already and you are still overheating, the issue is probably that the thermal compound between the CPU and heatsink is dried out. This might be worth replacing anyway while you’re in here. . .
-From looking at most of the Athlon X2 heatsinks, it looks like they have a clip that straddles the CPU and presses the heatsink against it. You can carefully undo this clip with a flat blade screwdriver and remove the heatsink.
-Clean off the CPU and the base of the heatsink with some rubbing alchohol and let it dry. You want it clean and shiny; try not to get skin oil or other contaminants on the mating surfaces.
-Apply some new thermal compound in a very thin layer to the top of the CPU. See herefor more info. There are high performance compounds available on Neweggor other online vendors and you can get the basic stuff at RadioShack (remember them?). You don’t need to spring for the most expensive stuff in this case.
-Reattach the heatsink (carefully!).
-Attach a new fan to the heatsink. You can also find new fans at Neweggbut you will need to make sure you get the right size. There are standard sizes and you can measure along one side of the fan to find the right match. You also want to match the power connector type. In your case, it’s probably 3 wires, but just take a look.
-Reattached the fan power leads.
-Make sure everything looks good and then power it back on. Keep watch on the CPU temps in the BIOS for a few minutes before going into Windows and see if things look back to normal.

I think the Coolermaster Vortex Plus would work with your setup, it has a top-mounted fan and isn’t too much higher than the stock fan. I use one for my HTPC which is somewhat space-limited and it works very well.

I concur with Enigma42. Before you spend money on anything, remove your heatsink, carefully clean off the top of your CPU, and re-apply thermal paste. Thermal paste is cheap.