Delay in prosecution of Trump

how can we reconcile these two statements?

Not without a functioning FBI and DOJ and court system–all of which have been absolutely corrupted by communists like George Soros and the Communist Chinese.

A newsletter, do you publish one?

What with you conservatives and the psychotic obsession with George Soros? There are hundreds of wealthy liberals who give tons of money to political causes, but the bogeyman is always Soros, Soros, Soros.

It wouldn’t have anything to do with his long-running fight to thwart Putin and bring democracy to Russia, would it?

He’s 88 Years Old, And Apparently A Threat To Everything On The Right

Of course it does, because Russia’s behind pretty much every Facebook group that spreads this stuff. People that spread this disinformation are unwitting (and witless) tools of a murderous dictator. Not the wannabe, but the real thing.

Thank you. I am always baffled by the George Soros = Boogieman narrative. There is never any hard evidence, only accusations with no follow-up. It drives me nuts.

Not without a functioning FBI and DOJ and court system–all of which have been absolutely corrupted by communists like George Soros and the Communist Chinese.

What makes Russian communism more appealing than Chinese communism to you?

Gee, I wonder when there will be one of these trackers for Hillary’s crimes, or Bill’s, or Obama’s, or Biden’s? What about other characters who have committed obvious crimes and treason? George Soros? Chuck Todd? Rupert Murdoch? Ted Turner? Brad Raffensperger? Nancy Pelosi? Chuckie Schumer? Kevin McCarthy? Steve Chucri? Bill Gates? (Both of them) Jack Dorsey? Mark Zuckerberg? Sundar Pichai? Eric Swalwell?

What would you bet that such pages would not be maintained by and would likely be fought by the same people who maintain this Trump page?

This thread is for a discussion about the effects of a delay in prosecution of Donald Trump. Your post here, as well as those following, are hijacks of this thread topic. That’s against our rules.

Feel free to start your own thread about what you wish to discuss in your initial post, but do not continue to hijack this thread.

Not a warning, only guidance.

To others in this thread, please stop responding to this thread hijack. Thanks.

Some of the stuff that’s come out this week seems pretty damning. 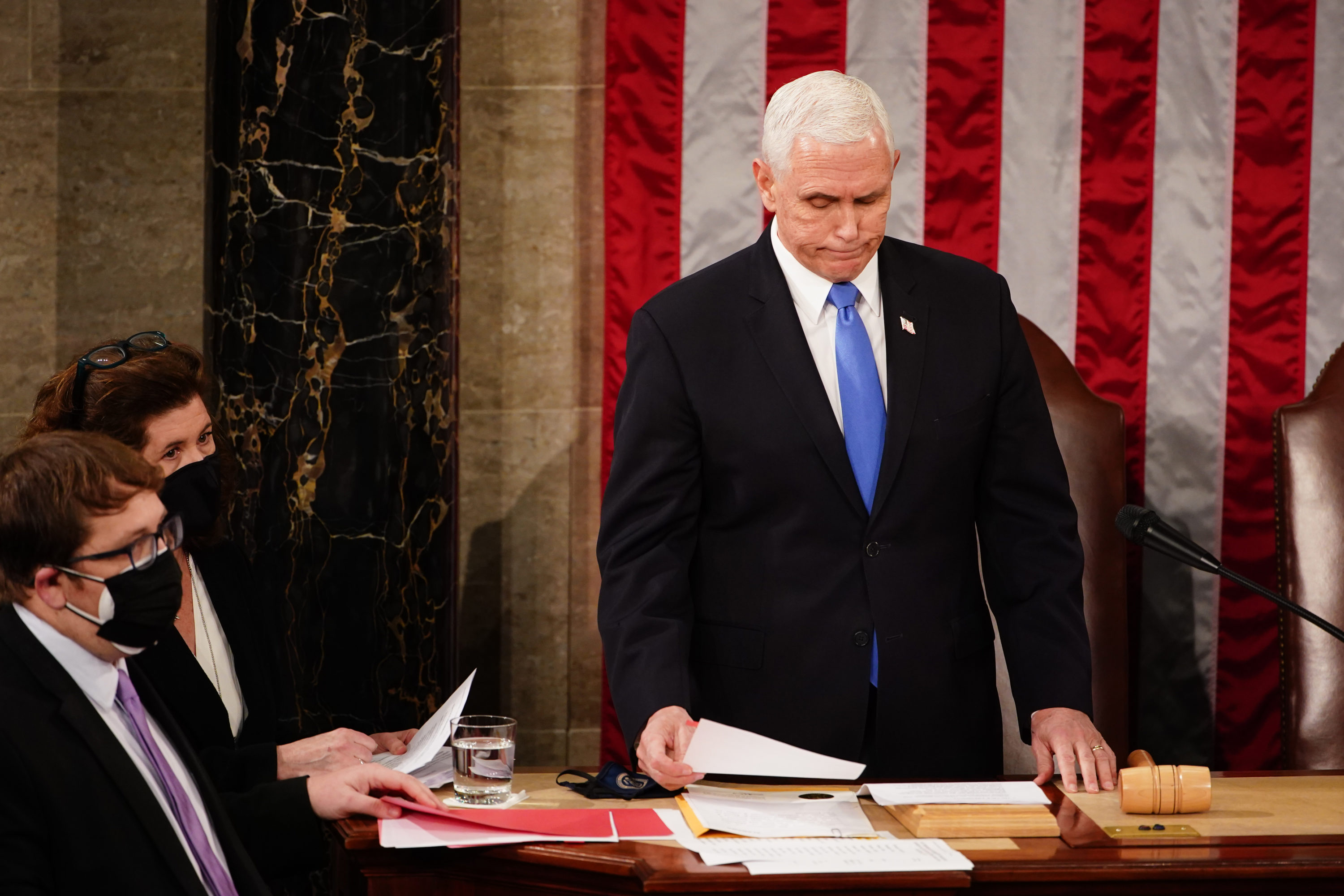 The Failed Game Plan for Overthrowing the 2020 Vote - The Bulwark

The basis of John Eastman’s memo: Get Pence to lie, then count on the GOP to be Trump trucklers.

It sure is. I hope/want to believe that Garland is conducting an ongoing federal investigation into all this. If he isn’t, this kind of slam-dunk evidence is going to make it awfully hard for him to avoid doing it – no matter how much he’d prefer to avoid the inevitable screeching about political witch hunts from the unhinged Trumpists.

The memo is clear, unambiguous evidence of intent, as well as foreknowledge that what they were doing was illegal.

It should be noted that The Bulwark was started/is run by Charlie Sykes, a well-known and once-staunch Republican back in the day.

Some of the stuff that’s come out this week seems pretty damning.

The Failed Game Plan for Overthrowing the 2020 Vote - The Bulwark

While it is quite obvious now that this should be prosecuted, it is not obvious it would not have worked in real life (or appeared to and not have been overturned by judicial review) at the time. It is far from certain it will not be tried again and that it will not be successful then.

Will it not be ironic if T***p’s greatest and most consistent sycophant and enabler, Mike Pence, becomes a hero of (large scale) democracy in the future? Perhaps history will focus on Pence’s refusal to go along as a Mount Rushmore like event in our nation’s development. Perhaps once Eastman is convicted and the former guy is further disenfranchised (I have all but given up on seeing him held accountable-- I will settle for further humiliated, disgraced, and forgotten), Pence will re-emerge as a Republican you can trust, a Republican with moral fiber, the new Republican Party leader!!

There has been no delay because THERE IS NO EVIDENCE, and there never has been any evidence!

There was a metric boatload of evidence. However, there was also a toady AG, and a blindly partisan Senate.
ETA: And yes, there are other things that Trump may be prosecuted for beyond that which he was impeached (twice) for.

There has been no delay because THERE IS NO EVIDENCE, and there never has been any evidence!

I would recommend using better citations. The NY Post is known not to be credible.

T***p’s greatest and most consistent sycophant and enabler

You people seriously believe that? Pence has turned out to be a scandalous traitor to all of us, and even to you whether you realize it or not. Some enabler! He refused to delay Senate confirmation of the 2020 election for just ten days so that the state legislatures could conduct audits and consider decertifying their votes if they found discrepancies–all totally within the law and really we should all expect it for a really close election–ESPECIALLY if y’all think Russia is and has been interfering in our elections. But it seems you only have a problem with that when your guy loses, and ESPECIALLY when the rest of us think CHINA is interfering and changed votes to give Biden the win.

Y’all are going to feel pretty silly when this is all finally exposed and the criminals and traitors begin to sing like canaries to clamor for a deal in exchange for what they know.

Oh, there’s evidence… It’s just that at least some of it was complete bullshit concocted by the Hillary Clinton campaign.

Grand Jury Indicts D.C. Attorney with Making False Statements to the FBI in...

Special Counsel John Durham today announced that a federal grand jury returned an indictment in the U.S. District Court for the District of Columbia charging Michael A. Sussmann, 57, a Washington, D.C.-based attorney, with making a false statement to...

So the Steele Dossier was fake, the Alfa Bank story was fake, and all of it was ginned up and paid for by the Hillary Clinton campaign.

Perhaps any ‘delays in prosecution’ have more to do with people waiting to see what shoe will drop next, and now hoping the whole sordid mess just goes away.

It’s just that at least some of it was complete bullshit concocted by the Hillary Clinton campaign.

Hide and watch. This is just the beginning of the end of this coup that was been attempted since 2015 and was completed in 2020.

Y’all are going to feel pretty silly when this is all finally exposed and the criminals and traitors begin to sing like canaries to clamor for a deal in exchange for what they know.

That is okay, I often feel silly.
You are going to be fun to watch on these boards!! Welcome to the Straight Dope!

Yeah, just ten days. Has Arizona had ten days yet?
All states had certified their results. No justification existed for any delay.

The NY Post is known not to be credible.

Wait–and the lying-about-being-in-a-helicopter-brought-down-by-enemy-fire-Brian-Williams IS credible? The caught at least twice now doctoring 911 recordings NBC IS credible? The foisting-forged-documents-to-influence-the-2004-election CBS IS credible? We live in an upside down world where the truth is called lies and lies are called the truth, depending what letter you choose to put after your name.

No justification existed for any delay.

The justification was that the person who gave away top secrets to our Number One adversary (gee, I wish there was a name for that) lost the election. Since The Messiah can never lose, that justifies any length delay.

I’m done with this. Y’all are brainwashed and there ain’t no educatin’ none of yas.