Did any Nazis publicly demonstrate remorse?

Pretty simple question. Did any of the Nazis, after World War II ended, ACTUALLY apologize for what they did? I don’t mean “I’m sorry about the crimes that were committed by [someone else] but I had no knowledge of this”, I mean something along the lines of “I’m really, really sorry, I admit that we murdered millions of people and it was really fucked up what happened, I got caught up in it like a lot of other people and we were enthusiastic about our mission and now that I look back on it, it was really horrible and I’m going to feel shitty about it for the rest of my life?”

Most famously, Albert Speer. But…

Although he denied full knowledge of the Holocaust, he at least made a show demonstrating remorse for what he contended was his largely unwitting role in it. However, as I understand it, scholarship since his death in 1981 has reached something of a consensus that he was an knowing and active participant in many elements of planning and executing the Holocaust. Since he always denied that, I don’t know that he ever demonstrated genuine remorse for his actual actions.

The Commandant of Auschwitz is known to have apologized shortly prior to being hanged for his crimes. He did so in writing. With that said, a factual answer that I hope fits the bill, I don’t believe his name or his words deserve to be repeated here.

A few Nazis did more than just apologize - they risked their lives. There are a few (very few) Nazi party members among the Righteous Among Nations, credited with saving Jews during the Holocaust. Here is an article about Helmut Kleinicke.. A slightly better known Nazi party member who risked his life to save Jews is Oskar Schindler.

But there have been some actual apologies. Here’s the case of Reinhold Hanning, although you have to wonder why it took so long and after being charged with war crimes. As pointed out in that article, apologies and/or shows of remorse among Nazis were rare.

In his final statement at Nuremberg, Hans Frank the head of the Nazi’s General Government in occupied Poland and who had been deeply complicit in the atrocities committed there (“The butcher of Poland”), seemed to apologize.

Among other things he said:

“I do not wish to leave any hidden guilt which I have not accounted for behind me in this world. I assumed responsibility on the witness stand for all those things for which I must answer. I have also acknowledged that degree of guilt which attaches to me as a champion of Adolf Hitler, his movement, and his Reich”

“A thousand years would not suffice to erase the guilt brought upon our people because of Hitler’s conduct in this war.”

It’s hard to get a apology out of someone who if they apologize they are acknowledging the crime they would be executed for. Though after conviction and sentencing I believe some did.

A group of officers tried to kill Hitler on more than 1 occasion. Most famous was July 20 1944 plot where the bomb went off but Hitler was not killed. All of those plotters were killed , some of them the same day. Tom Cruise movie Valkyrie is about that plot.

That’s not an apology though, and the more credible Hitler assassination attempts were motivated primarily by self-interest. The 1944 plotters, for example, wanted to kill Hitler, take over the country, and then negotiate a peace with the Western Allies that would exclude them being tried for atrocities and allow them to continue to war against the USSR.

Traudl Junge, one of Hitler’s young secretaries (a major character in the excellent last-days-in-the-Fuhrerbunker drama Downfall), expressed remorse and regret later in life, and blamed herself for not looking up from her work and realizing what was going on during WWII: https://en.wikipedia.org/wiki/Traudl_Junge

Indeed. Many of them seemed quite okay with Nazi atrocities in the ‘east’ (including the murder of Jews, commissars, and other undesirables) until the crows started to come home to roost.

They weren’t so much anti-Hitler as anti-losing-to-the-Bolsheviks.

It was freakishly rare for any Nazis complicit in war crimes to apologize. 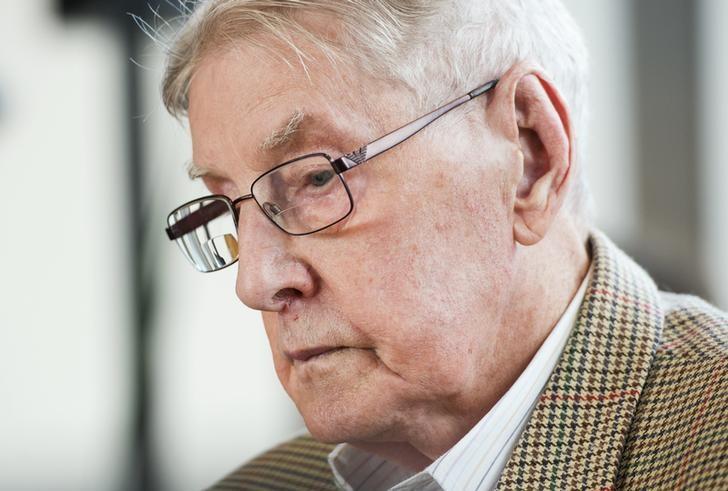 Seventy years after the Nuremberg trials, something truly extraordinary happened in a German courtroom last week. Reinhold Hanning, a 94-year-old former Auschwitz guard who will go down in history as one of the last of Hitler’s perpetrators to be...

As KarlGauss’s link indicated, Hans Frank did express remorse. However, his saying “I assumed responsibility on the witness stand for all those things for which I must answer” has a rather weasely air.

*Frank’s son has referred to his father as a “slimehole” Hitler worshipper and said, when explaining why he always carried a photo of his father: "I am pleased by what the picture shows: He is dead.”

Seventy years after the Nuremberg trials, something truly extraordinary happened in a German courtroom last week. Reinhold Hanning, a 94-year-old former Auschwitz guard who will go down in history as one of the last of Hitler’s perpetrators to be...

If you’ve not seen it, there is a movie about Fritz Bauer that, in my opinion at least, was pretty good. It may still be on Netflix.

If you’ve not seen it, there is a movie about Fritz Bauer that, in my opinion at least, was pretty good. It may still be on Netflix.

I haven’t seen that film, but another, very great German biopic about Fritz Bauer the other day, “Die Akte General”. Highly recommended if you can find it anywhere you live. It showed that Bauer wasn’t only the driving force for the “Auschwitz trials”, but also for the capture of Adolf Eichmann. He gave Israeli intelligence the crucial hints, in conspiratorial ways because he had massive enemies in the young federal republic. He was a great and very brave man and should be much better known in today’s Germany.

And Admiral Canaris has been nominated to be on that select list. He was part of the Plot vs Hitler, saved many Jews (he said they were intelligence assets), and likely helped the Allies win the war- by sending idiots to spy on America and Britain, and talking Franco out of joining the Axis. Canaris was a German patriot who hated the Russian and also Hitler. He also tried to prevent WW2, but British Intelligence was heavily infiltrated by Communists and Chamberlain didnt believe the message.

So, there were Good Nazis.

I know there were various Nazis within the ranks of the Nazi Party during the war who attempted to undermine Hitler, undermine the plans for the Holocaust, help Jews, or otherwise do the right thing (and they all wound up being killed for it, predictably.) But that’s not really what I’m asking. What I want to know is if any Nazis AFTER the war was over, admitted that the whole Nazi movement was fucked up and evil, admitted that they were “the bad guys”, basically. Even if they tried to justify being involved in it somehow - “I fell for the propaganda”, “I was afraid of the consequences for not going along with it”, whatever - even if they qualified it with that, and ADMITTED that it was wrong. That is the kind of position I am looking for.

Providence Magazine article on Canaris. Mentions the rumor I read, where Allen Dulles got Canaris’s widow and children to Spain, where they were evidently paid a small pension, well after War’s end. Quite a feat, considering Nazi Sippenhaft attitudes towards the families of traitors. Canaris had a really rough time, towards the end.

The commander of Treblinka, according to his final biographer, broke down towards the end of their final interview and began to acknowledge the enormity of the evil he’d done. His wiki goes into it. He died from a coronary, something like 12 hours after the interview.

The Commandant of Auschwitz is known to have apologized shortly prior to being hanged for his crimes.

When the Allies liberated the camps they sometimes made the local townspeople tour them.

Supposedly, the mayor of Gotha, Germany and his wife committed suicide (that does not mention his wife so I may have mis-remembered) after having seen that. Presumably they did not know the horror that was happening but were willfully blind to it. When they saw the reality they could not cope.

Yup. I was going to name him. Have you read the book by his son?