Did PreColombian Native Americans have Euro/Greek concept of zodiacal constellations?

I read this article about the supernova of 1006 AD possibly being depicted in Native American petroglyphs.

The evidence seems thin – there’s no dating of this rock art mentioned, just a general comment that carbon dating isn’t accurate to a specific year. The main item that seems to serve as the scientists’ smoking gun is this:

“The Hohokam petroglyph depicts symbols of a scorpion and stars that match a model showing the relative positions of the supernova with respect to the constellation Scorpius.”

Here’s a good shot of the said constellation, admittedly taken telescopically, but bear in mind that ancient native Americans would be seeing a much clearer night sky, so they would see at least some of the details shown in this image:

I assume Native Americans wouldn’t have known about the concept of Ptolemy’s Zodiac before Columbus.

Would they nevertheless have identified that scattering of stars as a scorpion?

It just seems like perhaps wishful thinking on the part of the scientists involved to find a symbol they take to represent a scorpion in relatively the same position to a symbol that might or might not be the supernova that a constellation the Greeks identified with a scorpion shared with the supernova itself.

Am I reading too much into this? I thought the “constellations” were pretty much just agreed-upon groupings of essentially random dots, and not objectively identifiable objects in the night sky. Would the ancient Hohokam really have known “the constellation Scorpius”?

I would think that it is possible. Scorpius is one of the few constellations that looks reasonably like the animal it represents (unlike its Zodiacal cousins Aries or Cancer). Unfortunately that picture on the linked webpage you provided doesn’t really give the impression of a scorpion that can be discerned pretty easily in real life (in my opinion anyhow). Scorpions being native to both the Old and New World, it wouldn’t be surprising that Native Americans noticed the same general impression of a scorpion in the sky as the Greeks.

The evidence seems thin – there’s no dating of this rock art mentioned, just a general comment that carbon dating isn’t accurate to a specific year.

Actually, the linked article says “Quantitative methods such as carbon-14 dating are alternative means to assign ages to works of prehistoric art, but they lack precision of more than a few decades, so any depiction in art that can be fixed to a specific year is extremely valuable,” Barentine said."

So if carbon-14 can date this rock within a few decades, maybe the supernova depiction can narrow the petroglyph’s age to a specific year since (if) it correlates with an event observed by other peoples who’s recordings are more time-determinant.

I can see how the Hohokam depection resembles a scorpion. Where though was the supernove with respect to that constellation and does that jive with the petroglyph?

I recently found a reference to a source that said that some Soyuth American Indians viewed scorpio as a scorpion. I don’t have the reference at hand. Certainly it was viewed as such by the Egyptians and Babylonians as well as the Greeks. I suggested at the annual meeting of the Classical Association of New England a couple of months ago that a variant Greek interpretation saw Scorpio as a snake. Certain other groups in Asia and the South Pacific saw Scorpio as a snake as well.
Certainly other people around the world grouped stars into what we would call constellations (although the term “constellations” seems to be reserved for the Graeco-Roman interpretations. Other star-groups are dubbed “asterisms”). A German astronomer/artist working for Zeiss (which made the best planetariums) researched a lot of these and made up slides for planetarium shows, which Zeiss sent out in its bulletin “Planetarium News”. He was going to gfather these into a book, but died before he completed the book. Julius D. W. Staal took this guy’s drawings and researc notes and wrote them into a book himself, published as The Patterns in the Sky, reissued about 20 years ago as The New Patterns in the Sky. I don’t think Staal gave the German guy enough credit. But at least he got the information into print. The book is a gold mine of non-Western asterisms and legends.

Frustratingly, it’s not footnoted. If you want further information on these constellations and their myths, you’ll have to root out the original reports yourself. Good luck. I used this for my ownm book and subsequent papers. Don’t trust staal’s interpretations, either. Sometimes he says things as if they’[re accepted fact which are only his own opinion. 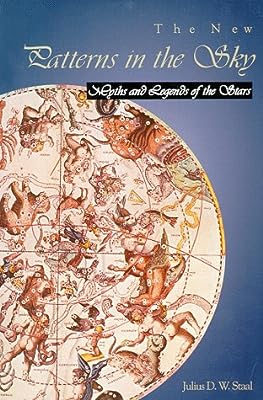 The New Patterns in the Sky: Myths and Legends of the Stars

The figure known in the West as Orion, to my knowledge, is almost universally interpreted as a human or demi-human figure in most of the traditions around the world, so I wouldn’t be surprised that another grouping has a far-flung common interpretation as well.

The figure known in the West as Orion, to my knowledge, is almost universally interpreted as a human or demi-human figure in most of the traditions around the world, so I wouldn’t be surprised that another grouping has a far-flung common interpretation as well.

No it’s not. This came as a surprise to me, too, since that was what I expected. Orion is a large human figure to the Egyptians, Greeks and Romans, and the Norse. It might have been in Mesopotamia. Bt in most parts of the world, judging from the Zeiss examples in Staal’s book, the entire constellation of the four stars outlining the rectangle plus the three-star belt aren’t even viewed as a single constellation. In most places the three stars of the belt form an asterism that does not include the four stars of the rectangle.

Among the Warao and Tupinamba of South America, the constellation consists of the belt stars, Betegeuse and the other “top” star, Aldebaran from Taurus, and the Pleiades. I know, because I went so far as to track down the original anthropologist’s report it was based on ( I found it in Harvard’s Anthropology library. In German, which I now wish I knew how to read. But I can read diagrams in any language). This is important, because as they view it there Orion doesn’t stand upright – in their skies, near the equator, Orion is on what is to us its side. (Further south it looks uopside-down to us).

Exactly. I think that what we call “constellations” are just a big cultural Rorshach test in the sky.

I further suspect that just because the ancient Near East civilizations handed down a lot of their traditions to the Greeks and Romans and thence to us, we are prone to assuming that a lot of other people share these beliefes/interpretations/memes. It’s a blind spot we have.

sailboat – You’re right to the extent that there’s not enough to guarantee that groups of stars are perceived as the same thing by different people. But sometimes the similarities are compelling. As I’ve noted, a lot of people see in Scorpio either a scorpion or a snake. It’s not hard to see why – that J plus T shape, especially the J part, suggests either a scorpion’s coiled tail, or snakes. Others see in it a fishhook - ahain, not hard to see why. You don’t even need to invoke cultural diffusion, which wouldn’t explain how it could be perceived as a scorpion on both sides of the Atlantic.

It’s not hard to see why the “V” shape of the Hyades in Taurus would suggest a Bull. Or that backwards question mark in Leo the Mane of a lion. But not everyone sees it tha way, of course.

Of those who did see a giant figure of a man in Orion – the Norse, Greeks/romans, and Egyptians – it’s quite possible that they came up with that on their own. 'm not surprised the Warao and other South American indians didn’t – the figure’s lying on its side.
a lot of people all over the world see a bear in Ursa Major, which is pretty hard to explain, since it doesn’t look like a bear. One suggestion I’ve heasrd is that the interpretation dates back to such an early time that it could be carried over to the Maericas. That’s a reach, I have to admit, but I can’t come up with anything better.
But most interpretations of the constellations and asterisms vary considerably from culture to culture. Or even in the same culture. I made the argument in my book that the constellations standing for the myth of Perseus (Perseus, Andromeda, Cetus, Pegasus, Cepheus, and Cassiopeia) originally got that interpretation in Argos, but that elsewhere the same constellations stood for the myth of Hercules and Hesione (which would be at Tiryns, where Hercules was supposed to have been king) and the myth of Bellerophon (Corinth). In my next book I argue that the constellation of Orion in Boeotia was taked for Pelops in Pisa, and other heroes elsewhere in Greece.

I recently found a reference to a source that said that some Soyuth American Indians viewed scorpio as a scorpion.

As an interesting South American example of Scorpio not being called a scorpion, Anthony Aveni’s chapter in Astronomy Before the Telescope (British Museum, 1996) includes diagrams of the sky as seen by the Barasana in Columbia. Like us, they recognise the same grouping of stars as a constellation, but called it “Caterpillar Jaguar”. What’s striking about this example is that they call the next group of stars along - roughly Lupus - the “Scorpion”.

That said, I agree that it wouldn’t be too surprising to find different cultures completely independently coming up with the scorpion analogy for the same patch of stars.

That said, I agree that it wouldn’t be too surprising to find different cultures completely independently coming up with the scorpion analogy for the same patch of stars.

However, it’d be pretty surprising to find that solid documentary evidence exists which shows that the Hohokam people in particular regarded that specific patch of sky as a scorpion.

My mom and sister both see Orion as a human figure, but doing cartwheels. They both interpret the “sword” as his head.

On the “Big Dipper = bear” question, it’s my understanding that some Native Americans consider the “bear” to be the four stars of the bowl, while the three handle stars are hunters chasing it. One of the hunters is carrying a pot to cook the bear in, accounting for the optical double Mizar and Alcor. They consider the other, non-Dipper, stars of UMa to be part of the bear at all (though to be fair, if you do include all of those other stars, it looks a lot more like a skunk than a bear).