Did the romans use twenty-sided dice?

Someone’s sent me the following link as allegedly showing a 20-sided die from Roman days. 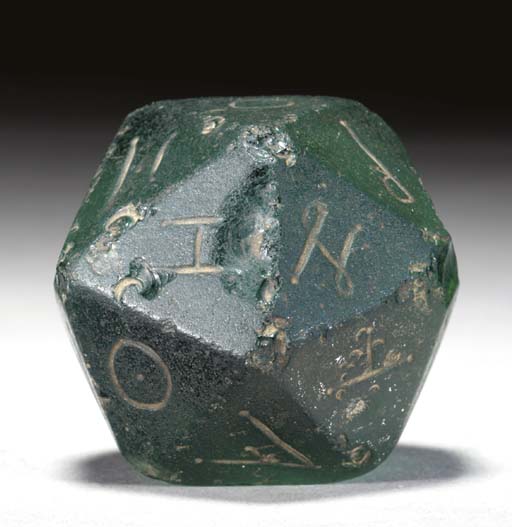 Is this for real, or a recent forgery? I find it slightly hard to believe. Anyone know?

It looks to be labelled with letters. It’s probably a first-century Scattergories die.

Dice in general descend from knucklebones, and are “nearly coeval with the creation of man.” The Romans certainly had dice games, including jactus, and I would be suprised if Romans were not aquainted with the icosahedron (via the Greeks) by the late Republican period.

Now for some delightful speculation. As the one cite shows, the icosahedron was regarded as a semi-mystical expression of the universal order by Pythagoreans. The die Christies is selling was likely used for divination or magical rituals, rather than gaming. Egypt in the 2nd centurty A.D. was a hotbed of religious diversification, as Pythagorism, Egyptian/eastern Mystery cults, Christianity, and a pinch of old-time “Paganism” all conmingled into a rich tapestry of beliefs often called Gnosticism. Some street prophet in Alexandria likely made his/her living tossing this die and telling freedmen they were fated to be the emperor.

Well, how else would they play * The Call of Cthulhu * or other roleplaying games?

All the other boards have this link - now we do too.

It is. But is it worth the pre-sale estimate, and might it reasonably be expected to appreciate as more is learned about Roman society? For example, Christie’s describes it as a gaming die, not a divination die. Might more knowledge about its probable use increase its value?

I’m having a hard time finding comps – most of the other Roman dies are from a later period and are more like dominoes. I’ve registered to bid, but frankly it’s not worth the money simply as decoration. It would have to have a chance of acquiring more historical value and perhaps monetary value to justify that kind of scratch.

I cast Magic Missile… at the Romans!

Zoidberg: You’re not there!

*Originally posted by Podkayne *
**Zoidberg: You’re not there! **

Am I getting drunk yet? am I?