This thread is about the guitarist Django Reinhardt. I’ve noticed some influences that I’ll mention below. Feel free to agree or disagree with my comments, and/or say anything you like about Django.

I’ve been listening to his recordings for a long time, much more closely in recent years. I’ve read some interesting things about him. For example, he had a successful career going when he was badly burned in a fire that scarred up one side of his body and, crucially, the ring and little fingers of his fretting (left) hand, which were left shriveled in a tight curl and could not be extended. Doctors told his family they’d have to amputate his leg, they refused and took him home, and, as most of you probably know, he learned to play without those fingers for all but a few situations (fretting treble strings in some chords; look for photos if you’re interested). So, nearly all of his amazing playing was done with just two fingers.

In an interview, Stephane Grappelli recalled their meeting. He said he was playing in some café, in Paris I think, and Django and his brothers/cousins were passing on the sidewalk. Django heard him, stopped and insisted they go inside. They walked right up to the edge of the stage and just stood there in their raincoats (think Bogart in Casablanca), silently watching him. Stephane had no idea who they were or what they wanted, and he said that he felt afraid. I love that story.

Here are some examples of music in which I think I hear the influence of Django and Stephane.

Anton Karas’ soundtrack to The Third Man. Yeah, it’s a zither instead of guitar and I’m guessing swing was common enough for Karas to be influenced by other sources. Still, that sly and outrageously playful quality sounds a lot like Django.

Alain Romans’ soundtracks to two films directed by Jacques Tati: Les Vacances de Monsieur Hulot and Mon Oncle. I see online that he recorded with Django and Stephanne, so he may have been influenced by their music. The soundtracks don’t sound as wild and colorful as Django’s playing, though, and I don’t recall an emphasis on virtuosism, so maybe there’s no connection.

Greg Lake often played a little bass fill that sounds a lot like Django’s strumming, and I’ve seen online that he openly acknowledged Django’s influence. Although I’ve cued these tracks to start just before the fill, there are several examples throughout both. Check ‘em out from the beginning; they’re really good!

From another thread, here are some others that he influenced.

Do you consider Chuck Berry a great guitar player

By far the most astonishing guitar player ever has got to be Django Reinhardt … Django was quite superhuman, There’s nothing normal about him as a person or a player. — Jeff Beck

“He was the greatest guitarist in my mind. I’d do anything to play as great as he did.” Les Paul on Django Reinhardt

“Even today, nobody has really come to the state that he was playing at. As good as players are, they haven’t gotten to where he is. There’s a lot of guys that play fast and a lot of guys that play clean, and the guitar has come a long way as far as speed and clarity go, but nobody plays with the whole fullness of expression that Django has.” - Jerry Garcia

In the Middle Grade novel (i.e., for ages 8-12) The Teddy Bear Habit by James Lincoln Collier, the MC, George, is taking guitar lessons. An agent asks his teacher if he’s any good.
“Well, he’s no Django Reinhardt, but he’s okay.”

Have you seen Django, the 2017 biopic about him? I thought it was quite good.

I was watching this interview with Black Sabbath guitarist Tony Iommi. He tells how, after losing the tips of two fingers on his fretting hand in an industrial accident, his foreman came around and played him some Django Reinhardt to inspire him.

My friend said, “Listen to this guy play”, and I went, “No way! Listening to someone play the guitar is the very last thing I want to do right now!” But he kept insisting and he ended up playing the record for me. I told him I thought it was really good and then he said, ‘You know, the guy’s only playing with two fingers on his fretboard hand because of an injury he sustained in a terrible fire.’ I was totally knocked back by this revelation and was so impressed by what I had just heard that I suddenly became inspired to start trying to play again.

No, I haven’t. I think I heard about it or saw some references to it or something. Will keep an eye out for that.

I was watching this interview with Black Sabbath guitarist Tony Iommi. He tells how, after losing the tips of two fingers on his fretting hand in an industrial accident, his foreman came around and played him some Django Reinhardt to inspire him.

One of my favorite stories about either guitarist.

I say Django was the first shredder, or proto-shredder if you prefer. Other guitarists were similarly “edgy” (see below), but Django sounded more surprising, IMO because he liked to switch from one technique or approach to another in a shorter space of time, probably to make up for his physical limitations.

Eddie Lang was another early virtuoso who might have detracted from Django’s impact if he hadn’t died so young (stupidly, during a tonsilectomy). It’s not obvious in all of his recordings, but he was a crack soloist, as well. Here’s one I’ve just heard for the first time: 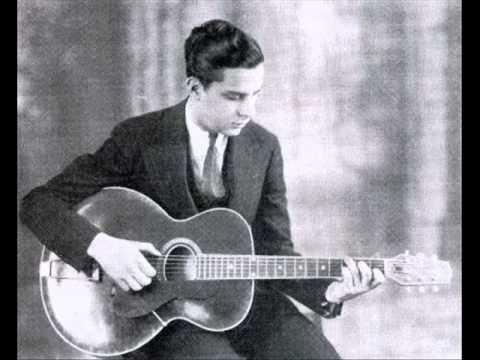 You can see him play here. Notice the runs he plays just after sitting down and the inversions all over the fretboard. 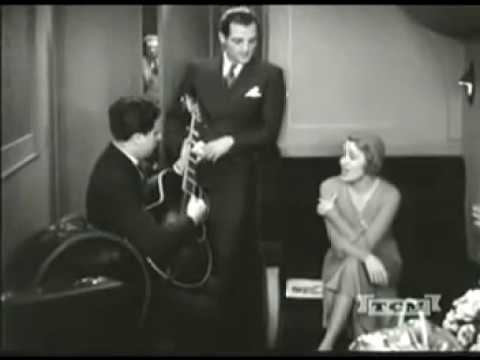 One of my favorite stories about either guitarist.

I remember seeing a photograph of Tony Iommi at a autograph session and he was sitting at a table wearing a Django Reinhardt t-shirt.

I can’t find the quote right now, but Richard Thompson, when asked how he rated his guitar playing, told the interviewer, “Not as good as Django, but better than Neil Young.” (Heavily paraphrased. Maybe someone else can locate the exact quote.)

Eddie Lang worked as an accompanist more often than as a soloist. Here he is with violinist Joe Venuti on Wild Cat (a jazzier number than either April Kisses or Without That Man). Venuti and Lang were often paired with each other, and were an influence on Django Reinhardt and Stéphane Grappelli.

“Not as good as Django, but better than Neil Young.”

Which is where about 99% of guitar players fall.

Keep it clean, or I’ll turn a hose on you…

A great interpretation. Just a little too early to add Ray Charles on piano and vocals. 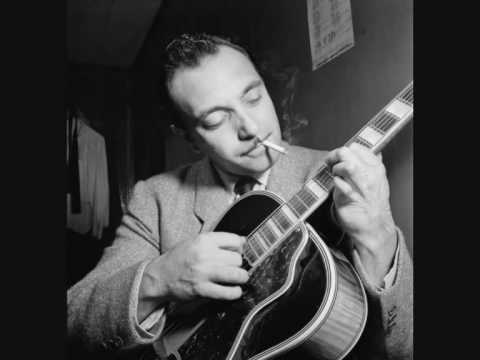 Here he is with violinist Joe Venuti on Wild Cat

Hadn’t heard that before. Snappy! It’s interesting how it sounds a little different from Django and Stephane.

A great interpretation. Just a little too early to add Ray Charles on piano and vocals.

Might be the first time I’ve heard that, too, and I like it. So thanks to both of you and to others for your contributions.

I have a few CDs somewhere that I used to listen to a lot, but lately I’ve been enjoying another compilation of outstanding tracks that aren’t on those CDs: 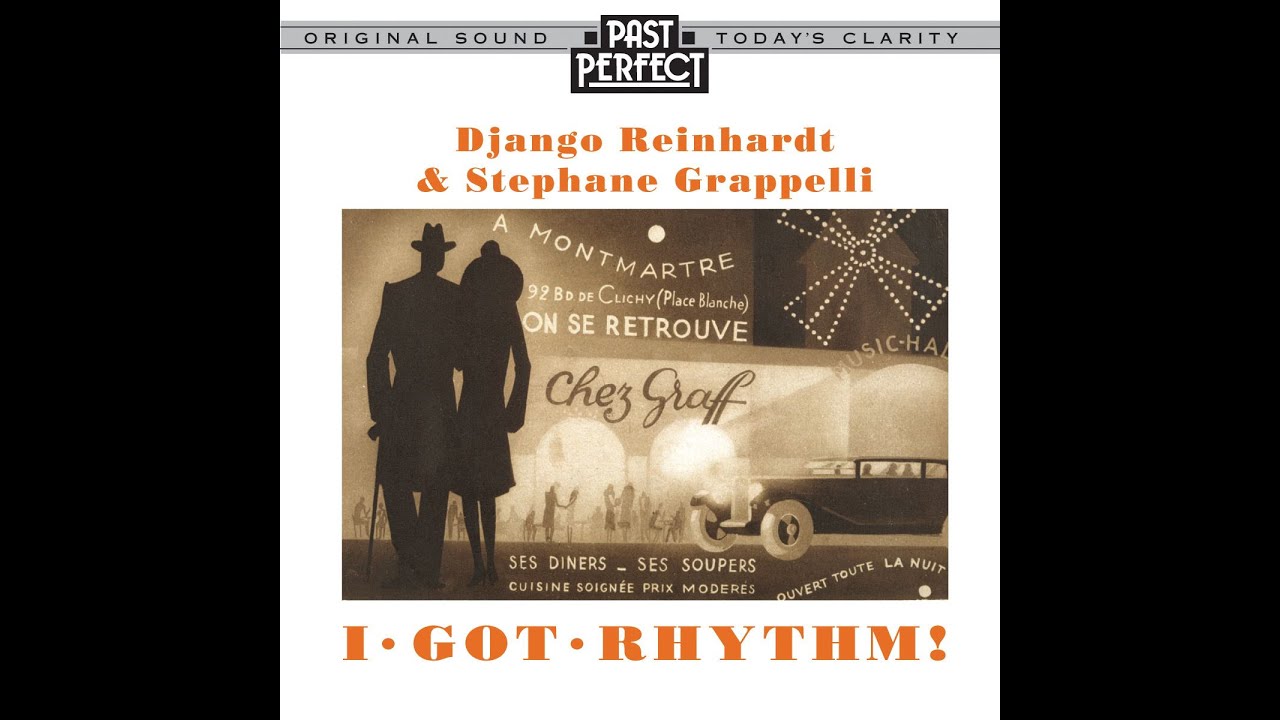