The Federal Court hearing has now been moved forward to Saturday.

Novak Djokovic v Minister for Immigration has been transferred from the Federal Circuit Court to the Federal Court of Australia.

Patriotism really is the last refuge of a scoundrel.

First. It’s the first refuge. Like violence is the first refuge, not the last, of incompetents. It bugs me no end that people keep saying that incompetents use violence last after they’ve tried everything else, when really they go to it first and don’t bother trying to find a non-violent way of dealing with an issue.

[Sorry. This is in no way a slam against @Chad_Sudan or anyone else here. I’m feeling very cranky today and it’s one of my pet peeves that people in general keep saying this without listening to what the phrase actually means. It’s like saying, “I could care less”, when you mean “I couldn’t care less”.

This rant brought to you by Digressions 'R Us, who now return you to your regularly scheduled thread. I think Djokovic should have been told no jab, no entry, too. Fuck the special little snowflakes.]

I would argue not so much patriotism, as much as nationalism, but the line can get blurred and crossed from one to the other, so I basically reject both. We saw what unfettered nationalism did to Yugoslavia (and many other places), and it ain’t good. (And I damned well know what “I could care less” literally means, but I’ll continue to use it, because I like it.)

It just feels like entrapment to get the guy here and go through all this, when it so easily could have been avoided.

So, was he entrapped into exposing kids to covid, or into lying about his test results and foreign travel? Because He’s admitted to doing two of those, though may be lying about the first one if he did the second one.

It’s hardly entrapment if he was already given special treatment (‘hey you don’t need to get a vax if you do these other things’) yet didn’t even pass the low bar that was a condition of that special treatment by lying about his travel and exposures.

Forget an inch. He was given a mile and still wanted more.

He’s still got his sponsors: 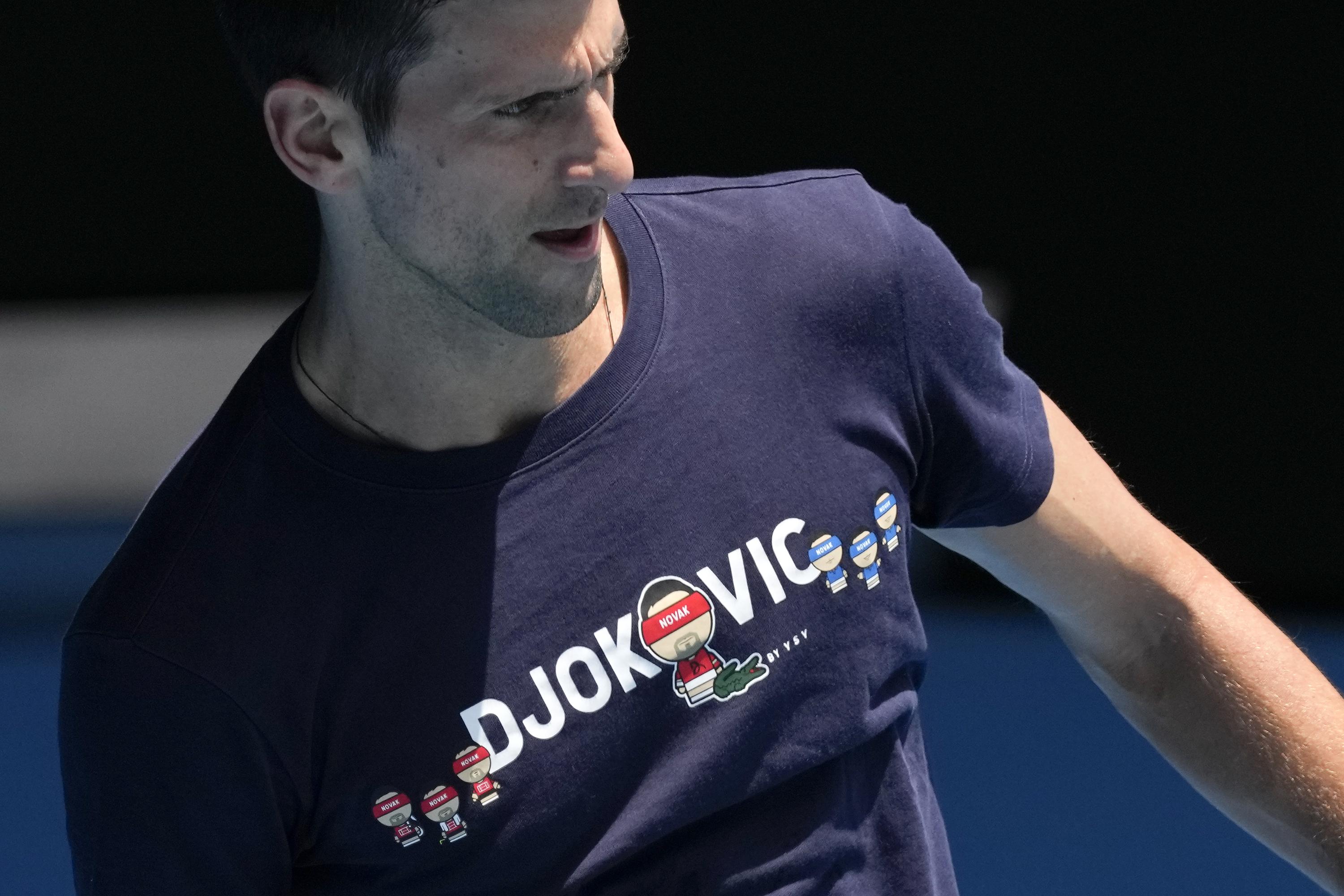 A lot of people are angry at Novak Djokovic . And his sponsors may just wait it out.

I don’t quite understand how the immigration minister exercising his personal discretionary right to cancel No-Vax’s visa can yet again be appealed to a federal court, but then, IANAAIL.

But I do remember reading that the Australian government, not anxious to be embarrassed a second time by a federal court overrule, took their time to build what they regard as an airtight case this time. This is no longer a case of Border Patrol acting improperly, it’s a case of the immigration minister making a considered decision that he is empowered to make. If I was to put money on the outcome, I’d bet on No-Vax being on his way back to Serbia in the next day or two, with an advisement not to let the screen door hit his ass on the way out.

He’s back in detention:

Djokovic back in detention, continues to fight deportation | AP News

MELBOURNE, Australia (AP) — Novak Djokovic was reported to be back in immigration detention Saturday after his legal challenge to avoid being deported from Australia for being unvaccinated for COVID-19 was moved to a higher court.

He’s back in detention

Yes, that was the procedure agreed to on Friday night.

From ABC News (Australian equivalent of the BBC), a full court of three judges will hear the case Sunday morning, 9:30am (AEDT).

All documents relating to the case are available here, and may still be added to or amended in the next couple of hours.

Have the tennis federations spoken up yet? I mean, it’s not like he missed a press conference or something serious.

I don’t quite understand how the immigration minister exercising his personal discretionary right to cancel No-Vax’s visa can yet again be appealed to a federal court, but then, IANAAIL.

But he’s listed at 6-4 to win the tournament on all the betting sites I’ve seen. So the punters (I will leave it to you to say if that’s the Smart Money or not) seem to think he’s definitely playing.

Have you checked the terms of those bets? I don’t bet on tennis, but in many sports the usual terms are that if he doesn’t play the bet is void - i.e. you get your stake refunded.

ETA: several betting sites confirm that. The price is conditional on him starting the tournament, otherwise void.

ETA2: Betfair has him at 9/4, and that’s also void if he doesn’t start. I’d guess that’s pricing in the fact that even if he does start, he will not be at his best.

Having said that, the Betfair market probabilities seem to add to close to 100% if you include Djokovic with a win probability of just over 30%. If I understand the market rules correctly, that seems to imply that the market is predicting he will almost certainly play. If the market were predicting he would probably not play, all the other players should be proportionately shorter odds and implied probabilities should sum to about 100% without Djokovic.

In any situation when one of the otherwise major favorites might not play, the OTHER players odds need to be shortened or those bets canceled if the favorite can’t play.

Take the extreme case where the two favorites would be evens, and everyone else 100-1 or worse, but there is doubt about one of the two favorites playing. The betting on the OTHER favorite would need to be shortened to 1-10 or something otherwise the bookies stand to lose their shirts.

In any situation when one of the otherwise major favorites might not play, the OTHER players odds need to be shortened

Yes, that’s exactly what I was saying - yet the other players’ odds do not appear to have shortened. Thus, if I understand the Betfair market rules correctly, that market is predicting he is almost certain to play. Which I find puzzling, given the legal analysis I’m seeing.

Bets on Djokovic will become void and a deduction applied to any winning bets placed before his elimination from the event. It is standard betting practice.

The deduction if Djokovic doesn’t play would be 30%.

It is explained here

That’s what I assumed would happen, but I can find nothing on the Betfair website that says this is the case.

a deduction applied to any winning bets placed before his elimination

Yes, although I cannot find it stated in the Betfair tennis rules, I think the Rule 4 deduction must apply, otherwise the prices don’t make sense.