Do modern electric vehicles need the weight of their battery for ballast & balance?

Let’s say tomorrow someone makes the hoped-for breakthrough and invents a new type of rechargeable battery with 100x the energy density of the best batteries available on the market today. Obviously this will be a great boon for as-yet undesigned vehicles, but I’m sure current EV owners will want to install these new batteries in their existing vehicles. If they can install a replacement battery with 100x the storage capacity of what their vehicle came with, this company who made the breakthrough might have a big problem keeping up with demand just to serve the existing installed base.
But what if this new technology happens to cost 100x or more per unit mass as much as current batteries? I’m sure demand will still be high because of current EV range issues, but many owners won’t be able to afford a full-sized new battery. They’ll want to get a smaller cheaper one, with less range than the full kit, because that’s all they can afford.
Will those owners need to install ballast weights, or maybe the cheaper version of the replacement battery would be manufactured with included dead mass by default, in order to preserve the vehicle’s handling and safety characteristics?

Just a point of reference from this: 50 kWh Bosch EV Battery will Soon Weigh Just 190 Kilograms - The Green Optimistic it appears that current EV batteries are around 230 kg or 500 lbs. Your invention seems to take that to practically zero, though there may be extra weight from the casing.

I would WAG that the suspension and ride height would be effected and with that alignment issues and possible drivetrain issues. As to how much they would be IDK. I think some ballast would be wise, but I don’t think that the full 500 would be needed.

As an owner of an electric vehicle - the car does what I want and drives the way I want. There is the risk of battery degradation over time, which would probably be the main reason to replace batteries. The Tesla supercharger (fast charge) network tends to have spaced their chargers in less populous areas about 100 miles (150km) apart. Nominal range for a LR “Long Range” is currently 300mi/500km; allowing for starting at 90% and not going below,say,10% this would give 240mi/400km range - this would allow most of their vehicles to go anywhere that close to a main interstate (or the TransCanada).

Claims are the batteries are good for retaining 90% or more of original capacity for hundreds of thousands of miles if treated right (Don’t drain too low quite often, don’t fill to 100% quite often, don’t supercharge over and over, etc.

If I could replace the batteries with something that does, say, 900mi/1500km - would I? Again, depends on the price. The much less range anxiety would be great. However, that’s 15 hours driving without a stop to charge. Is that necessary? I can’t go 15 hours non-stop - not because of the car’s needs. A car getting 30mpg, for example, would use 30 gallons - 270lb of fuel - to go that far. A battery pack to get me 300mi weighs a ton. Yet I don’t see a lot of mid-sized cars with 30gal tanks; 16 seems to be typical.

Also, price is a factor. the difference between the 300mi Long Range and 240mi Mid Range batteries for the Tesla was about $9,000 - so price is definitely an issue so far.

Most likely, if super-batteries came along car designers would reduce the battery pack to keep EV’s in that sweet spot of 300mi to 400mi - especially if the battery cost were exorbitant.

The other point is - design. Having hauled a second set of Tesla rims on an long road trip (for winter tire set - those are heavy rims! A Model 3 weighs a bit more than a BMW 3-series. Due to the battery pack, everything is heavy, and the rest of the car is designed to handle that - strong suspension, frame, wheels, etc. By having the majority of its weight in the floor, a Tesla is far harder to roll (There’s some impressive DoT tests showing this).

A lighter battery might change the stability of the car in extreme roll-over accidents, but not in general handling. It may make it easier to slide, less traction in crazy acceleration, etc. But for general driving, it probably would not matter. It might make acceleration less demanding on the battery, but for typical highway cruising, probably wind resistance not weight is the biggest factor.

A lighter battery probably means a complete car redesign - without all that extra weight, suspension components, wheels, tires, etc. can be smaller. The battery can be smaller (less current output) to get the same acceleration. The engine can be smaller. Instead of the floor of the car being all (heavy) batteries, maybe there’d be a suitcase-sized battery case next to both axles. There’s a limit how powerful you can make an engine compared to vehicle weight before acceleration results in spinning tires - as most conventional muscle cars with an engine up front and rear-wheel drive demonstrate.

So short answer - when I need a new battery and the price is not too bad, I would consider a replacement with even more range. More likely by then, years from now, a new vehicle designed from the ground up would be better.

But what if this new technology happens to cost 100x or more per unit mass as much as current batteries? I’m sure demand will still be high because of current EV range issues, but many owners won’t be able to afford a full-sized new battery. They’ll want to get a smaller cheaper one, with less range than the full kit, because that’s all they can afford.

From our discussions here I not convinced that current EV owners think there is a range issue with their cars. My guess is that only a couple of cars on the road would actually take the upgrade. Based on the EVs I’ve spent time looking at you couldn’t really replace the batteries since the cooling system for the batteries and preheater are both built into the battery pack.

Yes, at least in the case of bikes.

I have an electric moped with removable battery. With the battery in, the weight is evenly spread over both wheels. With the battery out, the butt is heavier than the front, to the extent that if you put it on the kickstand, only the back wheel will touch the ground.

Will those owners need to install ballast weights, or maybe the cheaper version of the replacement battery would be manufactured with included dead mass by default, in order to preserve the vehicle’s handling and safety characteristics?

Reducing the car’s weight dramatically would cause it to sit higher on the springs and change the suspension geometry. The cheap and easy way to fix this would be to install shorter springs in the car to get it back down to the stock height. Add perhaps $1000 to the cost of the new battery pack for new springs too. If you really wanted to be cheap, you could cut the stock springs to reset the ride height. It’s generally not advised because overheating the springs during the cutting process can change the spring rate and because you cut off the nice finished spring perches at the top or bottom of the spring which can put weird stresses on the spring seats. However, crapcan racers do this all the time and of all the problems those cars experience, problems with the springs seem to be the least of them.

Using a Tesla Model S 85 as an example, you would have a car that dropped about 1300 pounds of weight. Losing the weight would mean far greater grip in corners and better braking. Accelerating off the line, the highest performance Teslas are traction limited. Reducing the weight would reduce the mass to be accelerated but also reduce the traction. This would be a wash off the line but, at higher speeds where traction is no longer an issue, the reduced mass would dramatically increase acceleration.

I can’t imagine anyone would want to add ballast for handling purposes. The extra mass would cost money, reduce range, reduce performance, and have very few benefits other than replacing the need for new springs.

Short answer, no. Modern electric cars are designed to accommodate the weight of their batteries but they do not need it in any meaningful sense.

ETA: @Mijin Mijin noted the weight distribution on the wheels. I didn’t touch in this in my example but the Tesla’s weight is roughly equally distributed on its axles and the weight of the battery seems to be roughly equally distributed over them too. Removing the battery (or replacing it with a battery at 1% of its weight) wouldn’t really affect its weight distribution. 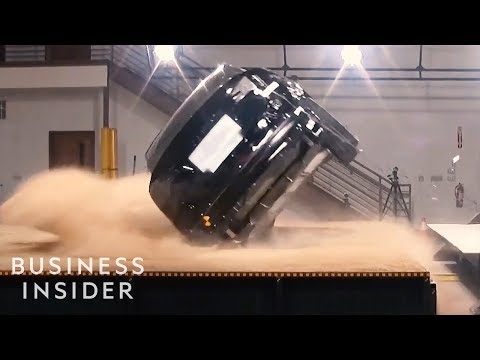 Here’s an example with the Model X; they load the car onto a carrier that suddenly drops it sideways at high speed into a bed of sand, a standard roll-over test. Most SUV’s will roll in this test with a decent speed - the Tesla will not, because the battery weight is about half the vehicle and is basically the floor pan. I recall seeing a video of the same test with a Model 3 and it’s even more stable.

I presume with a super-light battery it’s easier to roll.

I agree that it would be more likely to roll over in that type of crash.

I also saw a picture of the Tesla S P85 chassis that made me revise my estimate of the battery’s center of gravity. I’m guessing it’s actually closer to 11 inches rather than 14 (it’s thinner than I thought and mounted a bit lower than I guessed). That means that removing the battery would move the center of gravity from 18 inches to about 20.75, which is a pretty significant increase. Roll torque is still significantly reduced (by about 17%), but not as much as I’d estimated before.