Do people that believe in psychics, spiritualists, etc. tend to have certain belief systems?

So are they more prevalent to be christians, jewish, hindu, islamic, atheists, agnostic, other, etc.? Or is there no specific correlation?

In Africa, I suspect many of them are going to be animist. Worldwide? I bet it depends on the local culture.

Spiritualism per se is a separate religion, or at least it was founded as such.

Most of the ones I’ve seen on the web seem to self-identify as “Christian”.

I’ve seen a fair amount of people who are basically non-religious yet have a strong belief in the specific supernatural elements. Some people can be skeptical of sham psychics such as those doing it for profit, but still believe actual psychic experiences are possible. Say for example once they had a dream about dead people in a white car, and the next day they narrowly avoided a wreck where a carload of people in a white car were killed.

I think people who believe in a purely mechanical universe are even rarer than atheists.

However, even when familiar with both viewpoints some people will remain true to the woo. Maybe that’s due to a convincing story from someone they trust. Maybe because of a brain that doesn’t handle logic well.

Are some ethnic groups more susceptible or less so? I just don’t know.

It has been my experience that the greater a person’s spiritual or cultural tradiations emphasize belief over actions and the idea of the supernatural as an existing and active agent in the world, the more likely they are to place faith in physics, spiritualists, etc. You won’t find an atheist visiting a fortuneteller unless he or she is doing academic research (or mistakenly thinks it’s a good place to score something).

You won’t find an atheist visiting a fortuneteller unless he or she is doing academic research (or mistakenly thinks it’s a good place to score something).

Or unless they think it’s fake but fun, or they believe in superstition but not religion/gods, or any of a hundred thousand other reasons. There are as many different types of atheists as there are atheists. That’s kinda the point.

Not all of them have an objectivist chip on their shoulders.

the more likely they are to place faith in physics, spiritualists, etc.

Newton’s first law of spiritualism…an object in motion may be a ghost that is already in motion.

Newton’s first law of spiritualism…an object in motion may be a ghost that is already in motion.

Interestingly, there is evidence that the more one identifies with traditional Christianity, the LESS likely one is to believe in the occult. 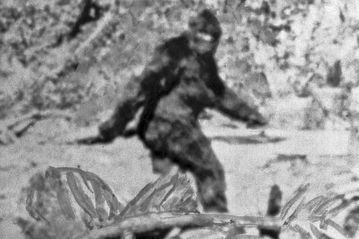 Atheists are more likely to believe in Bigfoot.

A devout Catholic or a Bible-thumping Baptist is actually LESS likely to believe in palm reading, astrology, crystals, psychics or communicating with the dead than tepidly religious or non-religious people are.

Well, just to throw this into the pot for thought, perhaps at a more abstract level:

I did a paper for a grad Statistics class, pulling massive amounts of data from the General Social Survey to compare religious tendencies, gambling tendencies, and locus-of-control indicators. I found strong correlation between them all, basically suggesting that those who believed in mystical entities and forces also felt mystical entities or forces had ways to influence aspects of their individual life – the value of the cards that are dealt, the pips facing up on the dice, the number behind the ball on the roulette wheel isn’t just random but responds to the favor or whim of some entity which may be called God or Lady Luck or Daikoku or Libra-passing-through-the-correct-phase-of-Saturn’s-house. They would be inclined to pray or engage in some behavior to try and somehow actively influence the mystical forces in control. Conversely, those who believe (whether correctly or not) they are in full control of their life path don’t tend to have much use for ‘that metaphysical mumbo-jumbo’ and those who feel the universe is just a big random coincidence don’t feel there are mystical influences in their lives either.

Though I haven’t followed the link, I suspect the WSJ article speaks to its customer base to tell them what they already know: Those who are more deeply involved in monotheism are more likely to adhere to the First Commandment and eschew beliefs and artifacts (e.g. palm-reading, star-reading, etcetera) from religions outside of their cult. After all, that First Commandment basically defines all other faiths as Evil and, therefore, stigmatized.

So are they more prevalent to be christians, jewish, hindu, islamic, atheists, agnostic, other, etc.? Or is there no specific correlation?

Historically, many prominent Spiritualists certainly self-identified as Christians. Andrew Jackson David, who has been called “the major theologian and philosopher of 19th-century Spiritualism in the United States”, is a case in point.

However, there have been some very important exceptions as well.

Emma Hardinge Britten and Helena Petrovna Blavatsky (both of whom left Spiritualism behind to become founding members of The Theosophical Society) were extremely critical of Christianity.

There’s a certain type. A lot of born-againers will denounce it as the devil’s work, but there are plenty of more whimsical types who believe in ghosts, angels, and the whole cart of candy.

The second type usually denounces all multifaith and Pagan magic as the devil’s work, and claims the Christian-labeled stuff is a miracle of God.

I think Man In The Sky (or Folks In The Sky) and all its variants are more antithetical to WitchesElvesFairies than either bunch is to atheism. In other words, I think one of the strongest contraindicators for animism, spiritualism, etc. is strong traditional religious belief.

After all, as other posters have pointed out, if you believe in Man In The Sky, one of the core prerequisites is that you must promise not to believe in anything else that’s not real.