Do we have a sense of how much activity the board has seen since the change?

I was looking at alexa.com to see how many visitors the board had had, and it’s pretty far down. I think that site calculates unique visitors, but I’m not 100% sure. In any case, I’ve been way more engaged because I like the new format, to me it has felt like the board has been a hopping place… but maybe it really is a lot down? I’m not sure if statistics are available.

I don’t know where Alexa gets her numbers from, but they are wrong. If you look at the number of posts over the last year, the numbers haven’t really changed much. 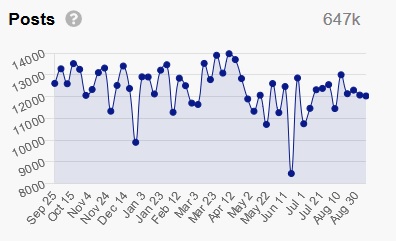 Why is the SDMB membership declining, and what's the best way to add younger members?
Maserschmidt September 23, 2020, 3:54pm #3

Yeah, that is what I was wanting to see, many thanks.

ETA: ps - so a little bit of a dip, but not a major one. Very glad to see it’s still going well.

I was looking at alexa.com to see how many visitors the board had had, and it’s pretty far down

Unless I’m looking at the wrong thing, that chart doesn’t show how many visitors the site is getting, but just it’s rank compared to all other sites on Alexa. So even if our page views were static, it could still go down in the rankings compared to everyone else.

What about the audience geography? Do so many people from India and Pakistan post on this board?

The chart ecg shows has a disturbing trend though. We should ignore the big downspike in Jul; that was the changeover to Discourse. And the downspike between Christmas & New Year’s happens every year; ignore that too.

Because of our age demographics and the logrolling nature of online conversations, the decline will be more exponential / logarithmic than straight line. IOW 4% last year is 8% next year is 16% the year after that. The specific doubling time may not be a year. But the fact that things will get badder faster says the actual crash point is a lot sooner than 20 years.

Unless something changes that draws in newbies and causes them to stay at a faster rate than the oldsters get old.

I’m doing my part. Are you?

Message boards in general have been declining for years. We’re still here so we’re doing better than most. Younger generations just don’t have much interest in message boards. They’d rather post on facebook or reddit. Not much you can do about that.

One thing that doesn’t help is Cecil’s retirement. New content on the Straight Dope page helped to draw newbies to the site. Without new articles, we lose that draw.

Another thing that doesn’t help is that we’re not very friendly to newbies, which has been discussed in other threads.

Unless something changes that draws in newbies and causes them to stay at a faster rate than the oldsters get old.

And that’s not going to happen with the broken links. Most of the links that someone might stumble across, even in Google but especially in old static references, will take them to the “thread not found” page. Which can’t draw users in and might even make them not click on legitimate links in the future should they run into one afterward.

What about the audience geography? Do so many people from India and Pakistan post on this board?

We actually have a fair number of users from India. Not so many from Pakistan.

We get a lot of spam from those regions as well. We can’t IP ban those regions since we do have a lot of legitimate users from that area, but Alexa could easily be counting spammers.

Most of the links that someone might stumble across, even in Google but especially in old static references, will take them to the “thread not found” page.

It’s an issue for old static links, but few people come here based on those. Google is constantly crawling our site to update its links. Roughly a third of our traffic here is from web crawlers constantly updating their links, so search engines shouldn’t be an issue. And search engines are what brings most new users here.

After we switched to Discourse, Google and other search engines pounded mercilessly on our site to update everything that changed. I was pleasantly surprised to see that this caused very few problems. That huge jump in traffic would have easily brought vBulletin to a grinding halt.

I avoid using Google to search the site because it still will show dead links so often. At least this is not as much of a problem for me as a user now that the internal search is so quick and bug free.

I avoid using Google to search the site because it still will show dead links so often.

Your experience is different than mine. I haven’t noticed any dead links out of Google.

Just as a test, I used a random word site to generate a couple of dozen different words and followed about 40 or 50 links or so from Google. I didn’t encounter a single bad link anywhere. When is the last time you tried a Google search here?

ETA: Just to clarify, I generated a list of random words, then copied and pasted each random word followed by site:boards.straightdope.com into Google and followed the first few links for each search.

About a week ago. I just tried again and the first result didn’t look promising:

But around 10 other phrases did have valid links as their first result so maybe it is slowly improving.

The link you posted is flat defective for both vBulletin and for Discourse. Though it’s obviously trying to be a vBulletin link. I wonder if you transcribed it badly.

I just Googled for the exact same thing [1920’s style death ray straightdope] and the first hit was the lead post in the Discourse version of the site:

I don’t know if this has been asked before, but what’s with the inordinately high number of references to ‘1920s Style Death-Ray’ around these parts. Here I am, a paying member and all and no one has let me in on this particular bit of secretive Dope-speak. Please, for the love of all that is young and beautiful, tell me what it means before I get zapped by one of those rays. And while you are at it, also kindly dispel my ignorance on the meaning of YMMV. Confounded acronyms. And cryptic refer…

The second hit was an earlier thread of almost the same title, and was also the Discourse version:

I hate not getting references, and it seems that you young’uns are beating me to the game. I’ve noticed that people around the SDMB are referring to 1920s-style death rays. (As opposed to 1940s-style death rays (Now with Plutonium)?) I don’t understand it, and I would like a clarification. I’m feeling like Og now: Old and slow. Excuse me while I write some 4004 assembly.

The wiki for Edgar Cayce was Google’s next suggestion.

I copied and pasted 1920’s style death ray straightdope into google and the first hit I got was the same as what LSLGuy got. It goes straight to the Discourse link, not a dead link.

That’s what I found bizarre. I didn’t understand whey Canada, UK, and Australia don’t show on that map.

I didn’t understand whey Canada, UK, and Australia don’t show on that map.

You have to sign up with Alexa to get all countries. And it’s pretty expensive - $79/month after a 7 day free trial.

Oh, now I understand how it works.