Do you have life insurance?

I already have one $500,000 plan that is quite cheap but it is “stepped” rather than “level” so the premiums will increase in the future.

Here are related yearly premiums and the total amounts I would pay: 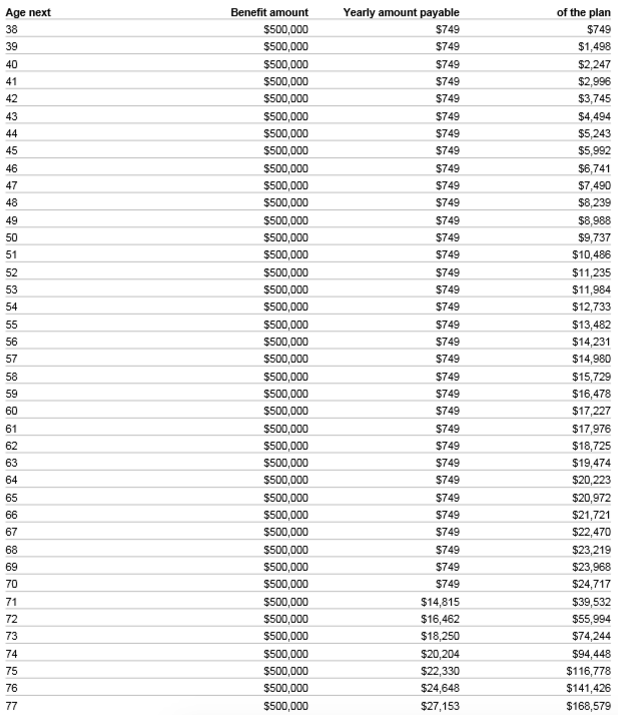 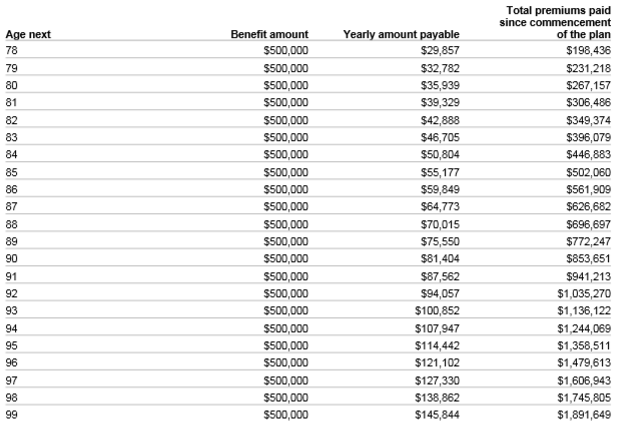 BTW in Australia they normally pay out on suicides if you kill yourself after having the plan for at least 13 months. I think for my mental illness (bipolar / schizo-affective disorder) there is a fairly high suicide risk.

My superannuation also includes a very cheap life insurance plan ($50 a year or something). I think it currently pays out $200,000 and this decreases with each year.

Yes, but only because I get from work, from having a bank account, and I think my latest BluRay player came with life insurance (not really but it seems a lot of places offer it)

I’m single with no dependents.

My dad said life insurance is appropriate if your wife is ugly and has no job skills (and you love her a lot), so that she won’t be screwed if you die. He opined that I didn’t need any, since my wife was lovely and has a PhD in the hard sciences. But she and I took out policies on each other. Not much - just $200K. The reason being so that the survivor would not have to promptly move or remarry in order to deal with payments on the house.

It was ten years ago when we go the policies, and the term expires in another ten years. These days it’s less of a big deal than it was when we first got married, since we now have enough non-retirement investments to be able to pay for the house.

I do. Necessary, since I’m the primary breadwinner, and we have a 2 year old child. Took one out for the next 20 years for both myself and my wife, so if anything should happen there will be money for him, or if I should die heroically defending people from evil terrorists, mom can concentrate on taking care of him in the short term.

Her’s is smaller, just enough to help me pay for child care basically.

Husband and I each have an individual policy. We’re covered at work automatically for one year salary. There is a separate policy at work for a larger amount if we die on business travel. We have a decent-sized nest egg. Finally there is social security survivor benefits. I once calculated that if husband and I both die on business travel, the kid will get close to $4 million, which is patently absurd.

Just what I get from work - either a year or 2’s salary. And there are survivors’ rights to my various retirement interests - pension, SS, etc. Anything other than that, IMO it is just as good to put $ into savings/investments.

IMO the need for life insurance depends on whether you have a beneficiary who will need it. My kids are out of school and employed, my wife is capable of working, and we have no debt.

Yeah but not enough; basically enough to get rid of the body and clean things up. We don’t have kids and the wife works; we could basically live on either of our incomes alone. So a big policy for descendants we aren’t going to have seems overkill to us; but something more of a cushion than we have is starting to look like a good idea.

I do. My job provides an amount equal to my annual salary and I pay a small premium for an additional 3x that amount. My kids are grown and my wife works, but I want to provide her with enough to dispose of my body, pay off the house and have a good amount to set aside. I do almost all of the handyman/remodeling stuff around the house and a good deal of the car repair, both of which she would have to pay for should I not be around. Between life insurance and my 401k she would be in a position to decide if she wanted to continue to work or not.

I didn’t take out a policy until I was 65 years old so it was expensive. I have just enough to last my girlfriend 1 year. This would give her enough time to loose a few pounds and find a new boyfriend.

No. Nobody depends on me for support, and my mess will be very easy to clean up after.

Yup. I got a policy once we found out we were pregnant back in 2012.

Last year I realized it wasn’t enough so I got a new policy for twice the amount.

I’ll probably get another within a couple of years.

eta: We have a young daughter and my wife worked to get me through college.

Yes. I sell life insurance for a living (mostly) so I am a believer. I’m young so I have a lot of term that is convertible to permanent insurance at my current age when I get old enough to not need the term anymore. This allows my wife and daughter to not be screwed if I die short term and a bit of legacy money for my kid long term.

Oh wait, I was wrong. I’ve had life insurance for the majority of my adult life. I had 400k when I was in the Air Force. And then, after I separated, I didn’t have anything until I got married. But that was a really small policy: only 50k. My wife was still young and pretty. I’m not paying for her second honeymoon.

Nope. My kids are all grown, and we’re retired. If I die, the wife gets all the assets. The only insurance we carry is long term care, and even that is partial coverage.

No. No dependents so there is no need.

My husband and I have 300K term policies on each other and we’re looking around for additional coverage. We want to ensure there’s enough to cover funeral expenses, pay off the mortgage and both cars, and still have a decent bit leftover. Neither of us would want to go back to work immediately if the other passed away.

When I hired in, there was a life insurance policy included, probably for a year’s salary. The MOU has been changed several time, but I haven’t heard of the life insurance being revoked. So it might still be there.

If the kids weren’t grown, or if I was married, I’d probably check to see if it’s still there.

My husband and I both have 250K policies that I believe stay at the same premium until we are 58. That gives us 11 more years to keel over or get a new policy. I wanted them to cover the mortgage and any other expenses in the event one of us died. We are in a much better financial position than we were 20 years ago, so I don’t know that we will get a new policy after this one matures/runs out/however it is set up.

I have some cheap term policy that comes with my job. Basically it’ll pay for the funeral when I get whacked, or however I go. No dependants, so that’s really all the insurance I need.

Mine gives me a lowered interest rate on my mortgage (the beneficiary in case of death is the bank, so my relatives would get clean title; in case of major disability the bank gets whatever is left of the mortgage and I get a payment). I also get one through work but that one is a benefit for which I don’t pay.