Does a bigger brake rotor on a wheel help brake performance?

I recently bought an electric scooter. One of the touted selling points was that is has a bigger brake rotor. Where most e-scooters have a 140mm rotor this one has 160mm rotor. They claim this gives it noticeably better cooling characteristics making for an all-around better brake than the smaller rotors.

I get that a bigger rotor means it takes longer for the rotor to make one revolution and thus allows for more cooling time before the same spot on the rotor goes back under the brake and heats up again.

But does this really amount to much? I cannot imagine that on a fast spinning wheel giving a section of the rotor a few extra tenths of a second (if that) will see it cool off much more to make a noticeable difference.

These are vented brakes if that matters here. Basically they are bicycle disc brakes pulled off the shelf for the scooter.

And while this is asking about a scooter brake I assume this can be applied to any brake. 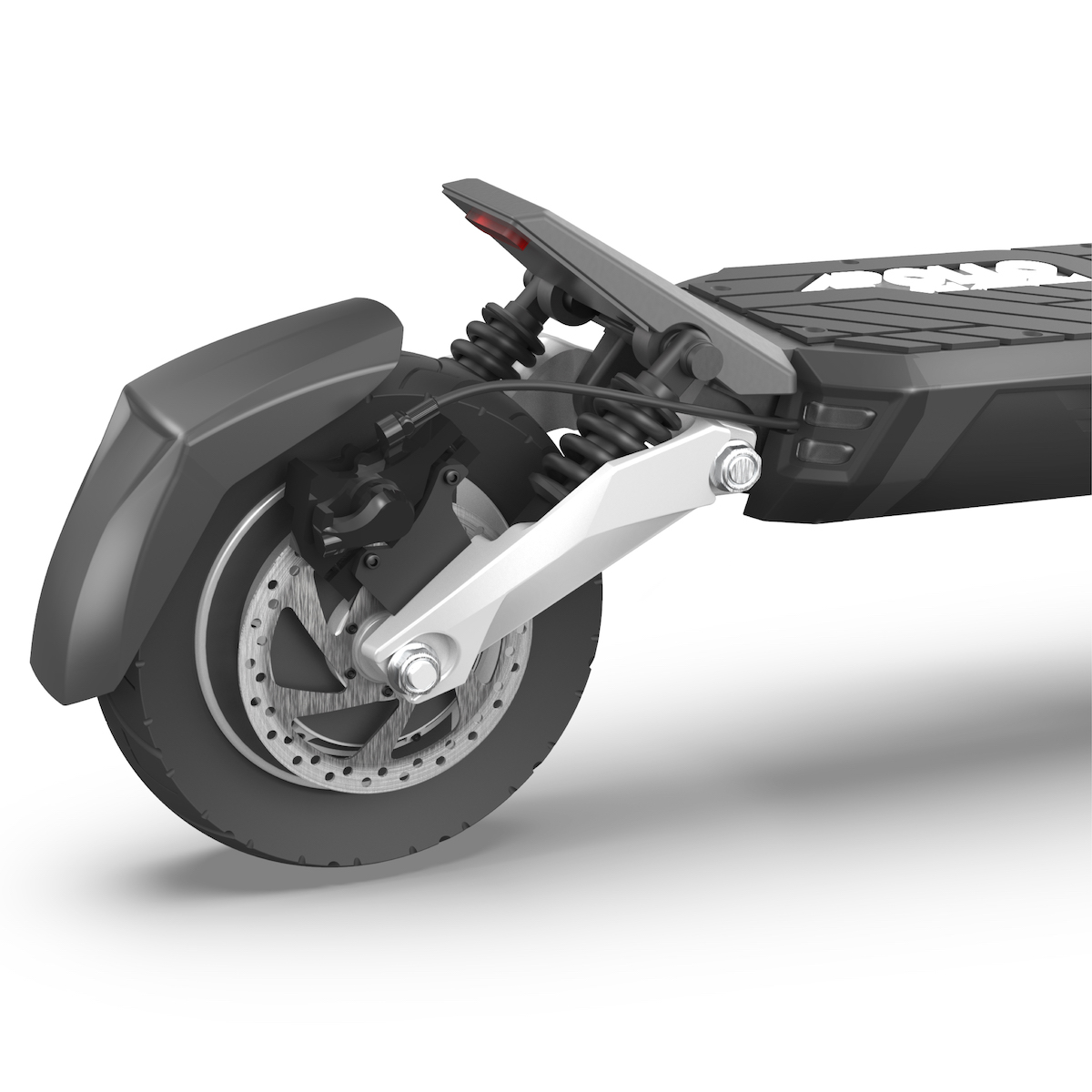 Brake performance degrades as they heat up. A larger rotor has more mass to absorb energy, and a larger surface area to conduct and radiate the heat away faster (or, radiate more heat at the same rate).

If this were not true, then the same brake rotor used on your scooter could also be used on a Ford F-350 towing a load of 18,000 pounds. Obviously, this is not the case, and larger rotors have correspondingly better performance.

Do vented brakes change the calculation much?

Which is to say if you make a bigger rotor but drill a jillion holes in it are you still better off? 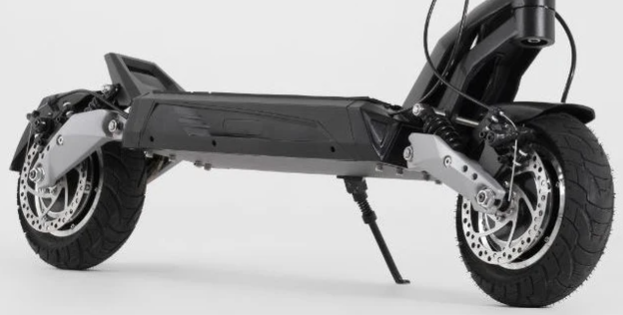 Just wanted to say that my bicycle has those kind of brakes, and they are so freaking superior to the kind that grip the wheel, it’s a whole new paradigm. I honestly can’t tell you how much bigger the rotor has to be, and in what proportion to something like the weight of the thing being stopped, before you notice a difference, but the rotors over wheel grips-- wow.

Do vented brakes change the calculation much?

Which is to say if you make a bigger rotor but drill a jillion holes in it are you still better off?

Brake performance degrades as they heat up. A larger rotor has more mass to absorb energy, and a larger surface area to conduct and radiate the heat away faster (or, radiate more heat at the same rate).

The tiny, thin one-piece brake rotors found on e-scooters and bicycles have another issue that’s helped by making them larger . When you use any disc brake, the friction ring (the area that’s worked on by the pads) heats up and expands - but the spider arms connecting the friction ring to the hub do not. Under heavy/repeated braking this can cause thermal distortion that results in lateral warping of the rotor, which manifests as brake pulsation. It’s usually temporary, and goes away when the friction ring cools off and shrinks back down to size, but it’s kind of annoying when it happens. Anyway, if you use a larger diameter rotor, you can keep peak rotor temps down, and avoid this phenomenon. High-performance vehicles that are expected to experience heavy/repeated braking (typically sportbikes, supercars and dedicated race vehicles) solve this issue by using floating rotors. These are two-piece rotors, with the friction ring and hub joined by a mechanism that allows the friction ring to expand/contract radially while still being able to transmit torque to the hub.

One drawback of two-piece rotors, larger-diameter rotors, or thicker rotors is that they add cost. Another drawback is that they add unsprung weight, which compromises suspension performance. The latter probably isn’t a huge issue for an e-scooter, where the overall unsprung mass is pretty low compared to the total suspended mass, and you’re not riding it like you’re trying to place first at Laguna Seca.

What is “unsprung weight”?

Unsprung weight is the weight of the vehicle that is not supported by the springs. Essentially, the weight of the hubs and axles, the tires and wheels, and brake components. As stated, for your scooter, it is likely negligible, but for larger vehicles, it can be an important consideration.

One thing I never see mentioned in these discussions (of larger rotors) is the larger effective radius of the braking arm. That is, the distance from the center of the brake pad to the center of the rotor. This is like a cheater bar on a wrench, and increases the effectiveness of the force the pad puts on the rotor. With larger rotors, this get greater and you have not only more braking force available, but better control of that force.

What is “unsprung weight”?

Unsprung weight is any weight that is not supported by the suspension. This includes:

If these components weigh a lot (compared to the weight of the rest of the vehicle), then when the vehicle goes fast over violent bumps, their inertia will tend to carry them upward, possibly to the point of becoming airborne. This is a major issue for high performance race vehicles where they’re trying to keep total vehicle weight down (i.e. not much sprung weight) while also getting very high performance out of the suspension. The designers put a lot of effort into minimizing unsprung weight on these.

A related problem arises for the engine’s intake/exhaust valves: if the engine spins too fast, the inertia of the valve prevents it from “following” the cam lobe as it closes, resulting in valve float.

Although there can be increased surface and increased friction whihc can lead to increased heat generation, this also allow the use of differant materials in the brake pads that work better at higher temperatures - an extreme example is the use of carbon discs on race wheels - the wear rates of carbon discs and pads are extremely high.

As for the holes, whilst they increase aircirculation, on two wheeled vehicles they server another purpose - non-enclosed discs on bikes can gather a film of water in wet conditions and this has nowhere to go when the pads are closed - this leads to film of lubrication and severe degradation of braking performance - especially on the initial braking bite - until heat generation removes the water.

Putting rows of holes in the disc gives the water somewhere to be swept into enabling the intial brake bite to be retained - during the late 1960’s it was an issue such that loads of bikers would drill out their brake discs, we had lots more skilled engineers back in those days who could do it for themselves.

I have never notice a brake pulsation on rotor brakes on a bicycle that is anywhere close to the pulsation of wheel-rim grips on a wheel that is slightly out of true-- which they all are, eventually, no matter how vigilant you are, and even if you learn how to true them yourself.

Formula 1 sure thinks so…the number of holes drilled into the rotors has gone up and up and up. 1500 per rotor these days.

What the…? I swear that article was in English when I copied the url!

Of course, but forced air cooling or not, the point is more holes = more surface to radiate the heat away.

What the…? I swear that article was in English when I copied the url!

The article is in English. But Discourse’s OneBox preview thingy doesn’t read the page text. It reads a special invisible field optionally present in the webpage. If that’s absent, the OneBox doesn’t have any text beyond the page title.

In this case the website’s invisible preview field is in Polish or Hungarian or whatever that is. Oops on them.

My understanding from reading tons of promotional literature from my days tracking both my Lotus and any number of motorcycles is that the core function of the drilled holes is to provide expansion space for the hot gases and dust generated by brake pads operating at high temperatures (and water, in rainy situations).

A secondary function of the holes is to reduce unsprung AND rotating mass (additional rotating mass is even worse than additional unsprung mass by about a 4:1 ratio according to old rules of thumb) while still providing the increased lever arm of the larger disc.

The third benefit of the holes then is additional cooling surface, but I believe that outside of F1 type situations with extensive ducting, the additional surface area is more or less a wash with lost thermal capability due to the reduced mass.

A number of the fast guys I used to hit the track with used grooved rotors, but not drilled through. They needed the expansion space for heated gases, but did not want the reduced thermal mass from fully removed material. Of course caveat this with the fact that this was with a Lotus group, lightweight cars that were comparatively easy on the braking system.

I would think the additional mass of the rotor would only be beneficial if you brake in short hard bursts with time to cool off in between. If however you have long braking events (such as descending a steep hill, which would be more of a factor in general driving or on a bicycle than in track racing) then the additional mass would be a hindrance as there’s now that much more “thermal load” to dissipate. Basically the additional mass is only beneficial up to the point that it’s soaked up extra heat.

Whew! Thought I was going nuts…in yet a new way.