Does anyone get this Hagar the Horrible strip?

He’s a viking, maybe he got hung up on the word “club” as a weapon and he wants to murder someone? But his son said “book club.” That’s all I got.

Maybe that’s the only type of book that Hagar is interested in, so the dad is really getting a gift for himself instead of the son.

I agree it’s pretty weak, whatever it is.

Supposedly Vikings are known for drunkenness, raping, killing and pillaging so it would make sense for them to show interest in Murder Mystery genre books. He is trying to raise his son with the right values.

This is my interpretation as well and I’m spending far far too much time trying to find a pun or double meaning and I just can’t.

Yeah I could see that, although actual murder mysteries would be too slow and cerebral for a comic Viking.

Yeah I could see that, although actual murder mysteries would be too slow and cerebral for a comic Viking. -

I’m pretty sure it means Hagar’s hovercraft is full of eels.

This is my interpretation as well and I’m spending far far too much time trying to find a pun or double meaning and I just can’t.

Sounds like you’re giving this more thought than the cartoonist did.

I’ve not read the strip in some time, but there was a theme of the son wanting to be an education civilized person, and Hagar wanting him to rape and pillage as Si_Amigo suggests.

Yeah, Hagar is trying to be accommodating… He’s not too keen on his son’s love for books, but he’s willing to admit that they’re OK if they have enough death and mayhem in them.

I like to think that Hagar would make sure his son only read books featuring acceptable murder methods. People being stabbed, beheaded, hanged or shoved off cliffs would be fine, but insufficiently gruesome methods like poisoning or smothering would go right in the trash. We can’t have the young man getting any wrong ideas!

Oof, that was pretty lame. There’s no reason Hagar couldn’t have suggested, say, a “looting and pillaging book club” even though that’s not a thing. The absurdity would’ve highlighted his primitive, barbaric nature, in conflict with the modernizing (and Christianizing!) society he’s becoming increasingly alienated from. 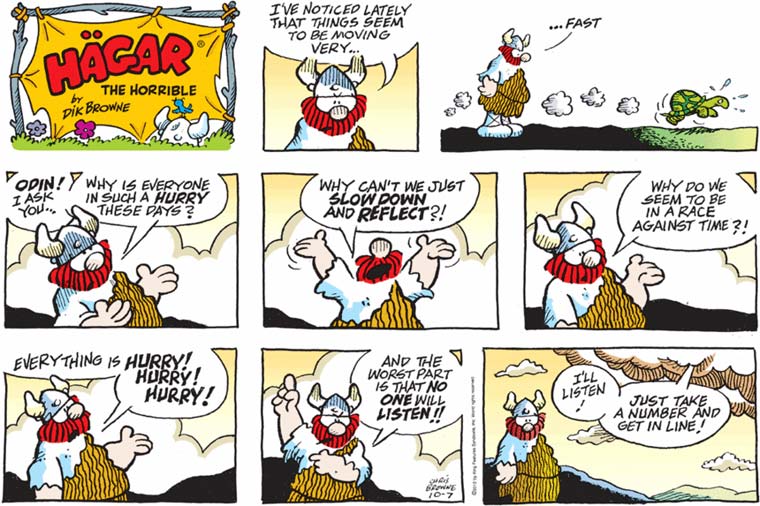