Does high humidity have any significant effect on computers and other electronics?

I have my home office set up in a loft space. It tends to get very hot in the summer, so I have an A/C unit that effectively cools and dehumidifies the air. But I tend not to turn it on until it hits around 80 degrees; until that point I depend on fans and airflow. I like the open windows and fresh air until it gets too ridiculously hot.

Last night a big storm front came through that knocked the heat down from mid 90s to low 70s. This morning I’m using the fan to circulate airflow and it’s only 75 in here, but it’s muggy as heck. I feel like I’m breathing steam. Which makes me wonder the title question.

ETA: I have a humidity gauge in my office, and it’s currently a tick under 80%. Highest I’ve ever seen it in here.

So long as it is not condensing water on anything you should be fine. Low humidity is often the problem as it tends to encourage static electricity, which can kill electronics.

Thanks, asked and answered! I guess this will be a short thread

Yeah, I’m always very careful in the dry wintertime whenever I have my hands in a computer.

This is certainly not the case for the OP, but there are some electronics that are expected to operate even if condensation occurs. An example would be electronics that are outside the pressure vessel on aircraft. One solution is to hermetically seal the electronics, but this is very costly. Most of the time, a conformal coating is simply applied to the boards.

Low humidity is often the problem as it tends to encourage static electricity, which can kill electronics.

Yep. I’ve worked in labs that run humidifiers to keep the humidity above some minimum.

Ideally you want electronics to be in an environment around 30 to 50 percent humidity. Lower humidity leads to static electricity issues (as said upthread). Higher humidity leads to possible condensation issues, which then leads to corrosion and device failure.

Electronics tend to be warmer than the surrounding air which helps to prevent condensation, but consistent humidity around 80 percent will probably cause issues in the long term. If it’s only for a few days it’s probably no biggie, especially if under normal conditions it’s around 50 percent or lower. If it’s consistently muggy then you’ll probably want to do something about it.

There might be issues if you have a mechanical disk drive in there. Those have platters or disks that spin fast, and read-write heads that can be moved over the disk surface to access any track as the disk spins. The heads are designed to be lifted by a thin cushion of air caused by the relative velocity of the platter under the heads, but this is only operative while the disk is spinning. The heads have to land on the platters when the disks slow down and stop, and the disk has to spin up to speed before the heads can take off. Also, vibration can cause the heads to occasionally touch the platters at speed.

This is all very critical to the survival of the device. Therefore, the lubricants used are important, and sensitive to contaminants in the gas phase, as well as contaminants that can migrate around in liquid phase and solid particles of dust. So, the drives typically have two filters – a “recirculation filter” that’s easy for air to pass through as the motion of the disk drags air with it, and a separate filter that’s much harder for air to pass through, to accommodate changes in air pressure inside and outside the housing. This latter one generally includes adsorbents to trap gas phase contaminants, and often a long diffusion tube to reduce the contaminant load it must adsorb. There’s also usually a separate sorbent container inside the housing to scavenge contaminants. This may include silica or other ingredients to adsorb and desorb water vapor to smooth out variation in the humidity, especially when the temperature suddenly drops (like when you take your laptop outside in winter).

There’s a lot of art and technology in this area, much of it somewhat secretive, and humidity is part of the concern. Condensation is disastrous, which is no surprise. I think gas phase contaminants are concerning even without condensation, though.

Mechanical disk drives are a very successful proven technology, and our experiences are what they are. I’ve had them fail on me, but it’s never been blamed on humidity. I don’t think I’d worry about your circumstances. Still, it’s reasonable to keep an eye on things – if you ever notice things (other than refrigerated drinks) “sweating” or growing mildew, it might be an adverse environment. Perhaps the bigger lesson is to always have backup, so drive failures are just an inconvenient expense and not a life changing event.

If I may tack on an add-on question to the OP, what about oil? I have a computer that’s quite far from the kitchen, yet found yesterday that the air-ventilation screen I put beneath it has a slick coating of oil now, presumably from inhaling oil vapors due to the laptop fans.

If I may tack on an add-on question to the OP, what about oil?

My loft office space is about as far and closed off from our kitchen as possible in our house, so not too worried about oil.

You don’t need condensation to cause corrosion. So adding more humidity = more corrosion. A lot of electronics is sensitive-ish to corrosion. So a TV at 60% humidity might last 9 years vs. 10 years for one at 40% or some such.

Basically you want to balance things since too little humidity leads to increased static issues. And not just little sparks but also dust.

IIRC, most electronics, the circuit board is coated so relatively immune from corrosion due to condensation. Sometimes, the lead solder joints are not.

The problem is condensation, as mentioned. This is worst in cold winter settings - the advice was, if you bring a laptop indoors after it’s been setting in the car for an hour or several, let it warm to room temperature and the condensation to evaporate before turning it on. the problem is less about corrosion than in shorting something, particularly the 120V parts.

After all, there are occasional exposed metal parts - the same caution, IIRC, was mentioned about being in salty environments like seacoast where there would be salt in the air from sea spray - condensation would then include salt, with higher risks of corrosion or shorts.

I also recall an article talking about laptop disk failures on the train to Tibet. The spinning hard drives are well sealed, since even a smoke particle could crash the head - but they include (used to include?) a tiny vent hole to slowly equalize pressure with the outside. The Tibet train would get above the 10,000 foot mark, to levels where the disk heads would not “fly” because the air layer was too thin.

I was talking to someone once who had worked in a shop where they did acid plating; he mentioned that they had to install force air ventilation in the office pod; the high humidity of hot vapors from the vats were sufficiently acidic, the early desktop plotters they got from HP died within a year. When they sent them to HP for repair, they were asked “What the hell did you do to these things?” The acid vapors had started eating the copper traces at the solder joints, and followed the traces under the protective coatings for quite a distance until the trace could no longer conduct, it was too corroded.

Cooking oil is very bad for your computer. It will gunk up your cooling fans and block smaller vent holes. It will also attract bugs which will further clog things up and cause overheating issues.

If you are getting that much oil that far from the kitchen, I think you need to make better use of your stove’s exhaust fan (or maybe get a better fan).

Oil has actually been used to cool high end gaming computers (not laptops though). If you are doing something like this, you need to use mineral oil, not cooking oil. Remove all cooling fans as they are made to circulate air, not oil. Add a pump to circulate the oil, and some sort of radiator system (maybe with fans) to draw the heat out of the oil. Do not submerge mechanical disk drives in oil. Do not submerge speakers in oil. It’s a bit more complicated than that to do it right, but that’s the basic idea.

Submerging your PC in oil was a bit of a fad for a while, but most high end gamers use more conventional water cooling systems these days (running water through a CPU cooler then to a fan/radiator system to draw the heat away, NOT submerging their PC in water).

Here is an example of oil cooling (first one that showed up on google, I have no idea if their components are any good or not): 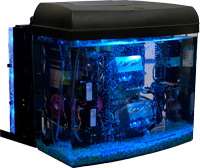 Build your own computer, mini pc, and server at Puget Custom Computers. We build for your workflow.