Hello this might sound like a dumb question . But for example When say hydrogen is extracted from water during electrolsis if enough hydrogen is extracted when does the water start not to be water ? does it just start drying up . and the opposite say the oxygen were to be extracted . And also if you were to extract hydrogen can re intruduced into the water and back again . I know this sound dumb I apologize . Thanks for any insight

Electrolysis of water takes two molecules of water (H2O) and produces one molecule of oxygen gas (O2) and two molecules of hydrogen gas (H2). It accomplishes this by electrically breaking the bonds between the hydrogen and oxygen. The hydrogen is produced at the cathode and oxygen at the anode. The two, when combined, will react to produce water, although it might take a spark to get the reaction started and it proceeds rather rapidly, producing heat (aka BOOM).

It is better to say that the water is split into its components (hydrogen and oxygen) rather than hydrogen is extracted.

If you pull out hydrogen you also get the oxygen.

Interesting little setup in the first part of this… 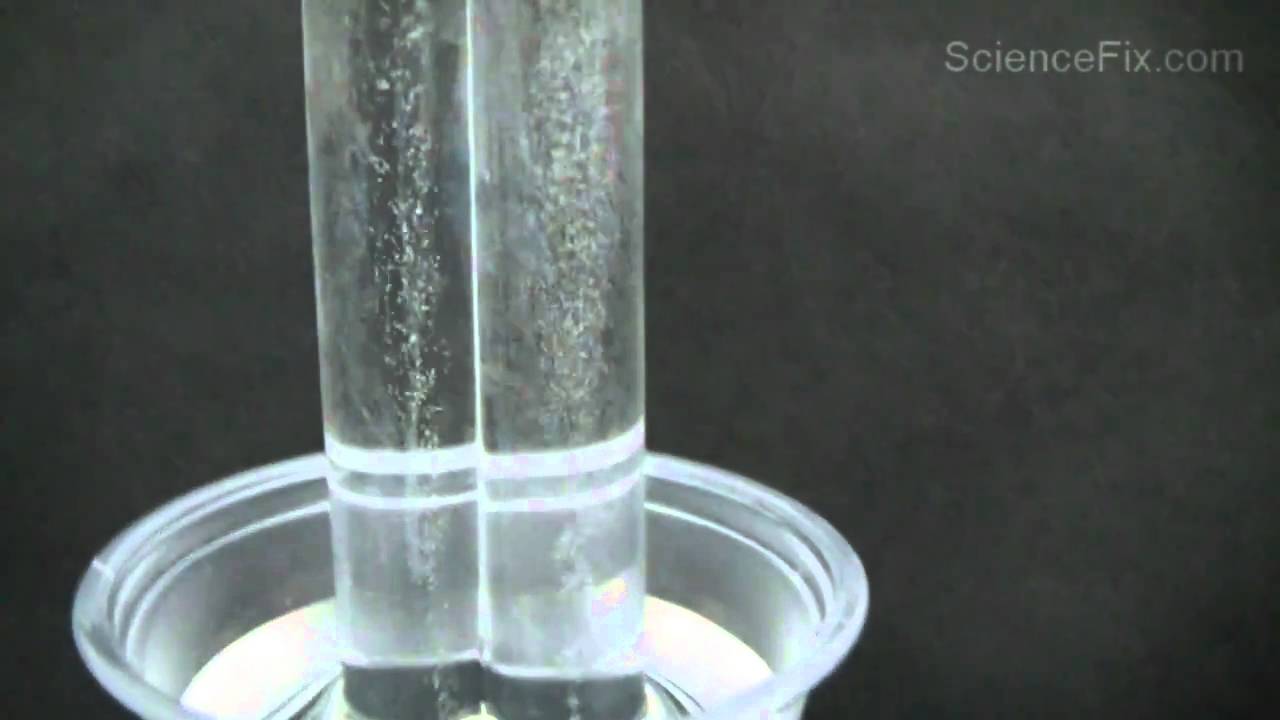 so at some point does the water just dissapear ? ok your are spliting the water into its two componets . so That is the same as water evaporating ?

This may not be such a dumb question at all if you want to know exactly “when water start[s] not to be water.” Sure the simple answer is to say that the hydrogen atoms gain electrons and form hydrogen gas at one electrode and simultaneously oxygen atoms give up electrons at the other electrode to form oxygen gas. But like many other phenomena, it is probably not instantaneous. Before having a nice argument, it might first be necessary to agree on a definition of exactly what do we mean by “water.” It is not all discrete H2O molecules. Water spontaneously undergoes self-ionization and has been said to form hydronium ions and hydroxide ions. But there is some speculations that this is a gross over-simplification and the resulting moieties are a little more complicated than that. Exactly what is going on at each electrode and how long does it take? I don’t know.

No. Evaporation is a change from the liquid to the gaseous phase. The molecules remain intact. Electrolysis splits the molecules.

so at some point does the water just dissapear ? ok your are spliting the water into its two componets . so That is the same as water evaporating ?

That is different than evaporation, where individual liquid molecules acquire sufficient kinetic energy to overcome atmospheric pressure and evaporate into the gas phase. Those gas particles are H2O molecules; the gas molecules from electrolysis are O2 and H2.

o at some point does the water just dissapear ? ok your are spliting the water into its two componets . so That is the same as water evaporating ?

When it evaporates, that’s a change in phase. Chill it until it turns into ice…it’s still H20, just a different phase. Melt the ice and drink it. Same thing.

How about this? Get some blue and red playdoh. Make a bunch of small blue balls. Make half as many (but bigger) red balls. Stick two blue on each red…space them like Mickey Mouse’s ears. That’s a water molecule, H2O.

When you apply electricity, there’s positive and negative. The reds one way; the blues go the other. Hydrogen and oxygen are diatomic, don’t like being alone. They bond to others, so instead of H an O, they twin up, making H2 or O2.

IIRC the test for hydrogen gas is that if you put a lit match in it, it will “bark.” Very flammable stuff…remember the Hindenberg? In oxygen, the match will burn brightly.
It seems weird that at room temperature oxygen and hydrogen are gases, but they combine and form water…a solid at room temperature.

Open a fresh bottle, put a little in your mouth…fizzy. Leave the bottle open for a few days and it will go flat, seem to change to water. After that, put it in your mouth. Not the same stuff, is it? Chemists put it into an equation to calculate.

In English: Two hydrogen peroxide molecules change into 2 water molecules + 1 oxygen diatom. Counting: Hydrogens will be 4 per side…oxygens 4 per side. The equation balances. We didn’t gain or lose any play doh.

So in that case you can see (and taste) that there really is a chemical change happening. That fizzy stuff you started with is breaking down into two different things. If you had good technique and good equipment, you could measure the mass of the H202, and see that the mass of H20 plus that of the O2 equal it. No atoms were “lost” or disappeared. The play doh pieces separated, rearranged, and turned into different things but you have the same number of pieces you started with.

If you manage to make 16 lbs of oxygen (by electrolysis) then you would have also made 2 lbs of Hydrogen.

So if you started with 36blbs of water And half (18 lbs) of it has been electrolyzed, then you have made 16 lbs of oxygen and 2 lbs of hydrogen.

You can reintroduce anything back in the water but it won’t absorb. Like a lb of water will absorb milligrams of oxygen or hydrogen or less. This is just absorption (like a towel when fluffed up absorbs air), it is insignificant when compared to chemically combined hydrogen/oxygen aka water.

Unlike a peanut, you can burn hydrogen right in the open air. Burning anything basically reacts it with oxygen. Reacting hydrogen with oxygen gives you water! Water is basically hydrogen “ash”.

Burning anything basically reacts it with oxygen. Reacting hydrogen with oxygen gives you water! Water is basically hydrogen “ash”.

Sand Won't Save You This Time

In a comment to my post on putting out fires last week, one commenter mentioned the utility of the good old sand bucket, and wondered if there was anything that would go on to set the sand on fire. Thanks to a note from reader Robert L., I can report...

WARNING - DO NOT FOLLOW THIS ADVICE.
Putting hydrogen peroxide in your mouth could kill you.

WARNING - DO NOT FOLLOW THIS ADVICE.
Putting hydrogen peroxide in your mouth could kill you.

* Household peroxide is sold in brown bottles in drugstores and supermarkets. It contains 3 percent hydrogen peroxide.

I’ve put it in my mouth many times for sores.

A small amount of hydrogen peroxide in your mouth won’t hurt you. My mother used to advocate gargling with hydrogen peroxide (mixed with water) for a sore throat. I didn’t like the taste of it and it never seemed all that effective to me.

Gulping down a bottle of the stuff is definitely not recommended, but he did say “put a little in your mouth” not “take a nice big gulp”.

Some people put hydrogen peroxide in their mouth to whiten their teeth. I don’t think it works and it might be damaging to your teeth, but they don’t die from it.

I thought you’d find that bit about burning hydrogen to be kinda cool, a bit of trivia you could bust out on your friends.

The important part was that bit about the peanuts.

IANA toxicologist, but from what I understand:
For instance, accidentally swallowing a small amount of household 3% hydrogen peroxide usually causes minor symptoms, such as bloating, mild stomach pain, and in some cases, vomiting.

Apart from the 3% concentration you can also buy 10% for bleaching hair, or 35% from certain health food stores. You did not specify which. I would not recommend trying it with hair bleach.

And note - even if you dilute it enough to gargle without vomiting, it has no known benefits. It won’t effectively treat a sore throat or anything else. I’d recommend that you stop putting it in your mouth, if only because it doesn’t work. Save your money.

Having spotted that link, Riemann, I was going to propose you should read “Ignition!” but then I saw the article actually links to it. It’s a fine read, the author has a vastly entertaining sense of humour describing his tenure as a rocket fuel chemist.

And note - even if you dilute it enough to gargle without vomiting, it has no known benefits. It won’t effectively treat a sore throat or anything else. I’d recommend that you stop putting it in your mouth, if only because it doesn’t work. Save your money.

I was at the dentist’s office last week for the second half of a deep cleaning. Before she did anything, the dental hygienist had me rinse my mouth for a full minute with hydrogen peroxide, I assume to reduce the germs that she would be exposed to.