Elevators with no floor buttons.

I know that paternoster elevators are of course terribly dangerous, but they are certainly efficient and fast. I wonder whether they could develop a modern, safer version nowadays?

Buttonless elevators are being implemented on some newer cruise ships (such as the Carnival Horizon). Apparently it’s been a mess. Older, less-tech-savvy passengers don’t get them, and neither do tipsy passengers of all ages. Returning cruisers from other ships are used to jumping into whichever elevator is available and are surprised when they can’t get to their expected floor.

It wasn’t by department, but one of my last clients had an arrangement similar to that described in the OP. There were two screens on each floor; you touched your card to the screen, called which floor you wanted and the system told you which elevator to use. If you were trying to reach an unauthorized floor there was a message saying so, and one of the four lifts responded only to specific people’s cards (building management, security). The system didn’t require each individual person to card in: so long as one person in a group was authorized to access a floor, the whole group could.

It worked well, although we used to joke trying to figure out if the system was trying to equalize the mileage of each car or what; it didn’t necessarily assign you the nearest one and might even assign one which was currently going away.

In each floor there was a set of buttons activated by inserting the card, seeing people simply found the screens easier. And the system gave the lift both on-screen and by voice. Not speaking Spanish was more of a problem.

In the building I worked in, it was actually keypads and not a touchscreen. I don’t think the letter was said out loud although I might just not remember.

There was, however, at least one elevator per bank that still had the floor buttons.

The real downside to the system is that now I find when I’m in a regular building, I often get into the elevator and just wait, forgetting to press the floor I want to go to. More than once, I’ve gotten in, the doors close, and I just wait. I finally notice I’m not moving (or the doors reopen to let others in) and I remember to press the floor button.

My first experience with one was going to visit a client. I went to the building, waited for the first elevator (which the majority of people got onto) & got onto it too. Only after the doors had closed did I realize there were no buttons to push.

Given they’re not standard (yet) there really should be some BIG sign in the lobby.

Just the opposite. High traffic is what destination dispatch was designed to manage. I first ran into it (the hard way) about 15 years ago, so it’s not exactly new.

The last office building I worked in was 35 floors, and with two banks of five elevators for service to 2-17 and 17-35 (17 was a sky lobby) it was rare to wait more than 10-15 seconds going up or down. Hugely faster than the previous building that had six elevators serving five floors. Having to wait 30 seconds or more was normal in that building.

I’m sure there are work-arounds for most of these. But being trapped in an elevator seems more serious than most.

I have been in hotel with a set up like that. You pick a floor before you get in, it tells you which car will be yours and one of a bank of several elevator opens for you. Usually there will be separate banks for ranges of floors.

I’m sure there are work-arounds for most of these. But being trapped in an elevator seems more serious than most.

You’re mixing two things. The elevators do not stop mid-trip because the computer is being rebooted; it is needed to give them the order to “go”, but not to “keep going”. Same as a regular elevator, if you think about it: you don’t need to keep your finger on the button.

Seems you don’t know what you’re talking about, and didn’t read the thread.

The same thing that happens when the computer running traditional elevators malfunctions: the system returns to some default failsafe state and people are mildly inconvenienced for entire minutes.

Just the opposite. High traffic is what destination dispatch was designed to manage. I first ran into it (the hard way) about 15 years ago, so it’s not exactly new.

Yeah, it seems quite obvious that this would be a way better system.

A computer that knows where everyone wants to go is going to be way more efficient than people just getting on the first elevator to come by.

Sure, there will be a few weird corner cases and mistakes, but the average performance is going to be vastly superior.

I once stayed in a hotel that used exactly that system. You pushed your floor on a keypad in the elevator lobby and bye and bye an elevator came along and took you and others, stopping only at the floors requested. Going down, you just pushed the elevator button. I think there was way to go between floors (I assume the staff had some kind of override); you just went between your floor and the lobby. I can’t remember where this was. I think it was actually activated by your room key.

The Rainbow Tower at Hilton Hawaiian Village in Oahu has this system. My wife and I were confused by it at first but I found it to be an effective way to manage large numbers of guests accessing the elevators at the same time.

Besides reducing trip times for passengers, increasing elevator efficiency indirectly reduces the number of elevators needed for a given building. Under the traditional system, with the trend towards taller towers, an unacceptable fraction of floor space would have to be allocated to elevators, or passengers would have to lose time in transfers at “sky lobbies”.

“Welcome to the all-new Acme Premier elevator, the latest in technology. The Acme Premier can understand English and will take you wherever you want to go. Please state your desired floor.”

“Going to floor ten as requested. Please fasten your seat belts as it will be a bumpy ride.”

“Now arriving at floor ten. Please exit the elevator and do not dawdle, as others are waiting.”

“You took me to the wrong floor! I want floor four, dammit!”

“Patrons will not talk back to the elevator. Patrons who sass the elevator will be sorry. It’s a long way down, remember. Now get out!” 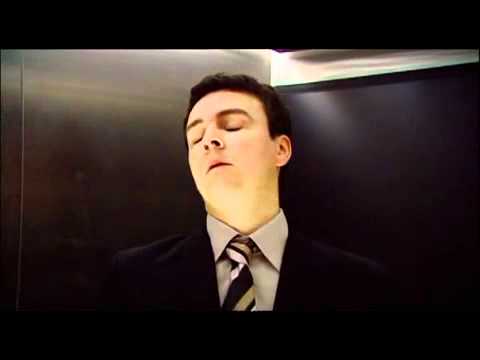 Can I really be first with this?

Not unnaturally, many elevators imbued with intelligence and precognition became terribly frustrated with the mindless business of going up and down, up and down, experimented briefly with the notion of going sideways, as a sort of existential protest, demanded participation in the decision-making process and finally took to squatting in basements sulking.

This is your elevator speaking. Got it, already.

Seems you don’t know what you’re talking about, and didn’t read the thread.

All I see in this thread are people saying it is more efficient without explaining why. The best explanation is just that they can zip back down really fast–but couldn’t you do that without this system, as long as you knew the elevator was empty?

I likewise have trouble seeing how it’s more efficient. Apparently the elevator requires 3 or 4 people to go, which means waiting in a low traffic building or not taking the full capacity of the elevator in a higher traffic one (unless part of the feature is that these are smaller than normal elevators, allowing more elevators in the same space).

I don’t doubt that it’s faster, but I would definitely like a better explanation of how it is faster.