Elvis in Fun with Girls in East Timor

(A very good friend posted the following on another forum, got very little traction, so I am posting it here because, well honestly I don’t know, other than it’s timely.)

Well, there’s a new Elvis biopic coming out on June 24. Every generation gets to have one.

This one stars Austin Butler (he played Tex in Once Upon a Time in Hollywood) as Elvis, with Tom Hanks as the Colonel. Directed by Baz Luhrmann, Mr. Over-the-Top, and by the trailer it won’t disappoint fans of stylish spectacle with weird camera angles. This time, it will apparently focus on how Tom Parker ruined Elvis, or maybe saved him - you know, a new twist where Tom is actually the misunderstood good guy. Who knows?

But I don’t see why we need a Life of the King picture now. No matter how you slice it, it will be criticized by the fans but still sell lots of tickets, and will come and go and another take on Elvis will be attempted in ten years.

What would I rather see personally? How about a new Elvis travelogue picture! You know, all those films that were churned out in the sixties, with Elvis playing an Elvis-like character in some exotic location or with the King in some lowly occupation who just has to prove it to 'em - and does! And the girls are all after him, but eventually he finds the Right One. And there are plot-advancing songs sprinkled throughout.

Okay, I admit I never sat through any of these; I suspect you either own all of them on VHS, then bought them again on DVD, or else avoided them like monkey pox - but hear me out. If done properly, it could be quite entertaining, and respectful but also genuinely funny - the template for an absurd script full of unlikely contrivances - coincidental meeting with powerful benefactor, first blush of success, then a setback, then just when our boy is ready to give up and go back to Kansas, whoom! Amazing reversal of fortune, gets the girl (the good one), sings one more upbeat song of triumph (you could actually write some good ones), and that’s a wrap. I’m thinking a parody like Walk Hard, the fake Johnny Cash story, but with “Elvis” as “Brick Sheridan” or some silly name, in some silly studio assembly line nonsense that’s actually an affectionate parody of the whole slate of crank-'em-outs that Elvis showed up for and dutifully pantomimed, because deep down he was really insecure and did what he was told, and you could see it in his eyes, but hell, everyone was getting rich and this is how you did it.

All you need is a title. Here are a few.

Okay, your turn to think of an Elvis movie title. Millions could ride on this!

I found my new City of Heroes character name.

(You know you thought of this one too)

(stolen shamelessly from Beany and Cecil) 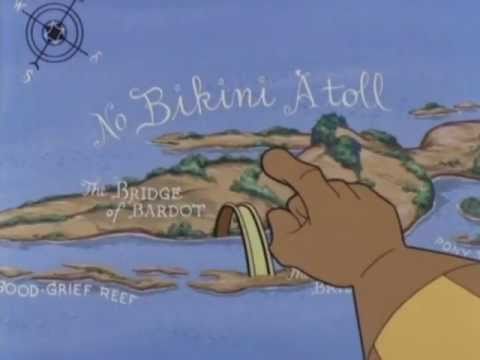 Shakin’ Bacon!
-Elvis’ car breaks down and he picks up repair money working in a small town diner. With an Ann-Margaret type.

In the Ghetto
-Elvis helps a woman who runs a battered woman’s shelter. With a Mary Tyler Moore (or Joan Collins!) type

Why not all three? Remember The French Lieutenant’s Woman, which went back and forth between a movie version of a historical novel, and a (fictional) look at the people making that movie?

Shakin’ Bacon!
-Elvis’ car breaks down and he picks up repair money working in a small town diner. With an Ann-Margaret type.

As long as there is a fried bacon, peanut butter, and banana sandwich involved, this is a winner.

As long as there is a fried bacon, peanut butter, and banana sandwich involved, this is a winner. 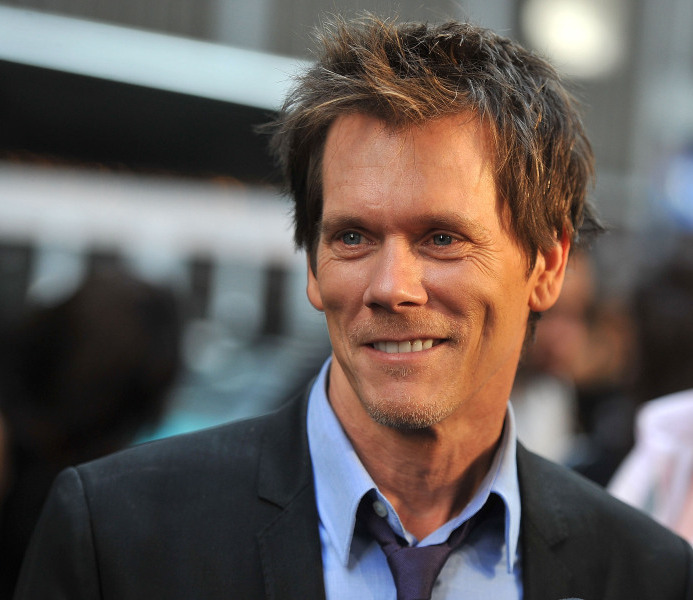 Regarding Elvis and Bacon (although the King preferred fried baloney* sandwiches):

Bacon was in Animal House with Cesare Danova who played Mayor Carmine DePasto. Danova was in Viva Las Vegas as Count Elmo Mancini.

They are a lot better than you’d think they would be.

No Trouble At All
-Elvis juggles a romance between two women not knowing they are mother and daughter.

Dud Ranch
-A singer on the run for the mob hides in a failing Arizona dude ranch. His popularity bring unwanted visit from mob enforcers.

A big musical number is starting in the diner, and the song is Footloose. Everyone starts dancing, except the short order cook, all decked out in the traditional greasy stained white apron and short order cap, played by Kevin Bacon, who looks right in the camera, and slowly shakes his head “noooo”.

Double Spinout on the Speedway in the Country Blues Trouble – Elvis performs seven great Blues hits as he drives in a race in the country whilst still finding time for romance with a rich lady and a cute female mechanic.

Frankie and Johnny…and Esteban – Paying tribute to today’s diversified culture, Elvis revisits one of his best-known roles with a change of ethnic and gender emphasis, but with his usual torrid singing and lovemaking.

Live a Little, Eat a Lot, Die a Bloated Corpse – Elvis takes a dramatic turn in this giallo murder mystery filmed in Italy.

Walking Pharmacy – Cinema Verite-like flick secretly made by the King himself paints a scorchingly repulsive portrait of latter-day decline with Presley wallowing in drug-addled excess.

Please make this film. Crank up the CGI and go for it. Also make sure it co-stars Ann-Margret.

With Bill Bixby as the foil and Will Hutchins as the Sidekick. Featuring Teri Garr as a backup dancer.