Ever picked up a hitchhiker?

Driving along in my automobile the other day, on a fairly quiet country road I spotted two individuals, a young man and woman, walking in the middle of the road. They jumped to one side as I approached and at the last second the fella stuck his thumb out.

I needed to get to a meeting, so I didn’t stop for them. There was two of 'em, so if they had nefarious intentions could have overpowered me by weight of numbers…plus they looked a bit chavvy, so I didn’t fancy the risk. Still, it was the first time I’d seen anyone hitchhiking for a long time, and the first guy to try and hitchhike with me, so it was interesting. Was I being a wuss? Any Dopers had experiences with hitchhikers or hitchhiking?

Yes, but it was over 25 years ago, in Val Verde, California. IIRC I took the guy home and let him sleep on the couch overnight.

Yes, but it was over 25 years ago, in Val Verde, California. IIRC I took the guy home and let him sleep on the couch overnight.

Wow. I can’t comprehend doing that.

Sure, a few times. Never had any problems.

I have not. It’s not because I wouldn’t want to help out, I have stopped to offer road side assistance several times over the years, helped a person shovel out once, and even once offered a free tow to stranded motorist who happily accepted the offer.
I am just too paranoid about picking up strangers who are walking or sitting along the road actively seeking a ride from strangers.
It seems to me that hitchhiking is a dangerous thing to do. My next thought is then, who would do that? it would either be a dangerous person or one who’s pretty desperate. And I have met too many psychos during times of more normal circumstances, enough that the idea of picking up random persons out along the roadway seeking rides from strangers, gives me the willies.

Disclaimer: The strangers mentioned above bear no resemblance to our very own Stranger on a Train who is not really a stranger and whom I would give a lift into town or a ride to NinetyWt’s house.

I stopped counting after I’d hit 10K miles on my thumb (been awhile though), and have also picked up hitchers before. You don’t see many around anymore, do you? Last time was a couple of years ago when i was driving down the Big Sur road, picked up a couple of Brit nationals on an adventure, dropped them off at the hostel in my town, ‘train stations over there, downtowns over there.’ No big deal.

Ah, so it was you in that flatbed Ford!

Once, about three years ago. He was walking along I-40 in Knoxville during the summer, and I had to exit to go back to get him. He told me he’d just gotten out of prison and was trying to get to Alabama to attend a funeral.

I drove him about seventy miles, and let him out at the exit I lived off of.

Ya know, I actually stopped in Winslow, Az a couple of years back. They have a restored flatbed parked on mainstreet and an Eagles themed kitsch store, kinda tacky, especially since it was Jackson Browne that was stuck there.

Really, it makes perfect sense. Someone is driving along the route you want to travel anyway, so why not double up?

But I haven’t done it in years–and haven’t seen anyone hitching in years, either, come to think of it. And by years, I mean decades. But it used to be pretty common.

“Really, it makes perfect sense. Someone is driving along the route you want to travel anyway, so why not double up?”

Maybe I am just a really paranoid person.

I was a teenager during the 70’s, and lived in Germany. My older brother was acting as my guardian, and he had a pretty loose view of safety and such. He cut me loose on the whole of Europe, giving me some cash and suggestions of places to go, and suggesting that I hitchhike. I once spent a night under a picnic table in Bavaria at Christmas due to this theory. That was an educational period of time, and as a result, I’ve been hitch-hiker friendly since.

My most memorable hitcher was an 80 year old hobo - we drove for hundreds of miles across the American west, drinking beer and talking about our lives. My most frightening was a young guy who, after a long stretch of driving, decided that I was as not a homicidal maniac, and pulled a massive machete out of his pants and put it in the back of the truck, so he’d be more comfortable. My most recent hitcher was a 13 year old kid in the BC interior - too young to be hitchhiking these days, so I took him to his destination, on the grounds that I’m not a bad guy, but the next person might be.

picked a guy up once, he turned out to be crazy, talking about a government run baby farm for govt pedophiles in florida, how some babies there “was spermed offa him”, some celebrities was one of them babies, and when he got to florida it was all coming down with the 666 and the end of the world and the devils baby farm. Needless to say i left him at the next busy gas station not too far from where i was headed. On his way out of the car he mentioned his full name. when i got home i did a search on him, and it turned out he had been on the missing persons list in nashville TN since 1985. i called the cops and told them where i left him, but he had already disappeared by the time they got there.

Usually when i pick up hitchers, they are less interesting, just broke and trying to get cross country to see family.

My parents picked up a couple of teenage girls once - local hitchhikers we came across on vacation somewhere out in the country. I remember being horrified at that tender age.

A guy I used to work with picked up a hitchhiking soldier along the freeway not far from Ft. Lewis, and was murdered by him. My friend was found stuffed in his car trunk. The soldier got caught. I believe this was in the late 1980s or early 1990s.

It is common enough here. I was in Fujairah, UAE and was on foot looking for a place. I walked into a small shop to ask and was told it was a couple km away. The shop owner came out to the street with me, flagged down the first car (a small red hatchback with 2 Iranians in it). He asked them to take me where I was going and they had no problem with it. I certainly had no issue with it either.

would never pick up a hitchhiker - I’ve seen too many bad TV shows and movies about how it can goe horribly wrong.

Where did the psycho hitchhiker meme come from anyway?

Where did the psycho hitchhiker meme come from anyway? 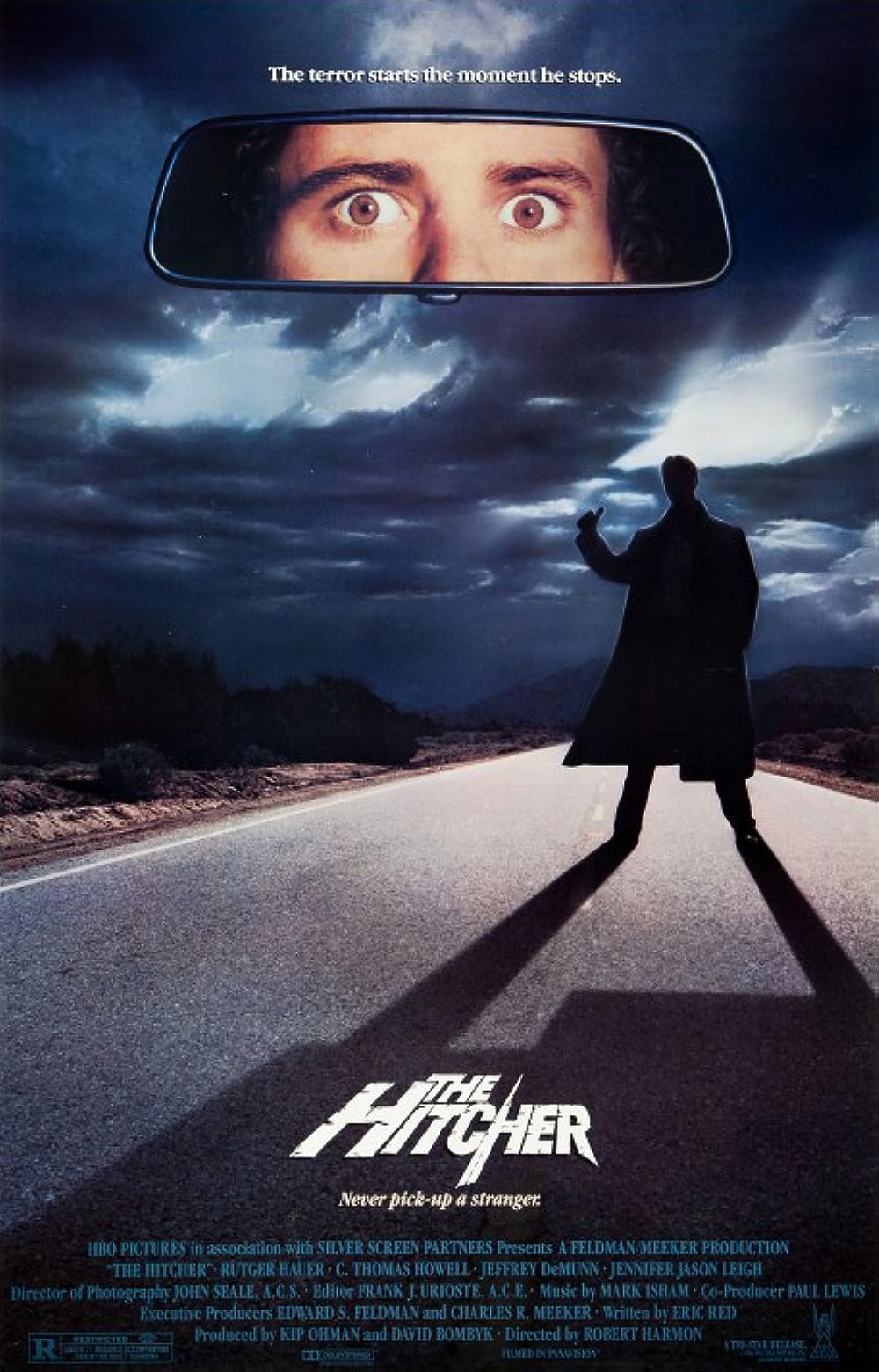 The Hitcher: Directed by Robert Harmon. With Rutger Hauer, C. Thomas Howell, Jennifer Jason Leigh, Jeffrey DeMunn. A young man who escapes the clutches of a murderous hitchhiker is subsequently stalked by the hitcher and framed for his crimes.

It’s been a while but I’ve both picked up hitchers and hitchhiked quite a bit. Before I got my first car it was my main method of transport. Later I felt I should repay the karma.

I was in Ireland for a month the summer I was 15, this was 1983. We used to hitch rides to the next village over all the time.

I’ve given rides to people who were clearly locals waiting for someone to take them to the next village; sometimes they had their thumb out, sometimes they were simpy at the town’s exit, waiting to see if any acquaintances came by, and I offered them a ride.

The longest trip I’ve given to anybody was from a bit beyond Saragossa to Valencia. I was driving to Castellon: it’s further north than Valencia but the best way to go is via Valencia, so dropping him there didn’t take me more than a few minutes out of my way. It was an Irish short order cook who’d come down to Spain following a woman, and his dog (a German shepherd type), both very polite and very nice. If he’d gotten rides with trucks, it would easily have taken him three days, as it’s kind of an unusual route.