Ex-smoker;s chance of getting cancer

I have often read that ten years after a heavy smoker gives up smoking his chance of getting cancer is (on average, of course) half of what it was when he smoked.
But I have never seen an estimate of the chance that smokers’s getting cancer compared with the chance of someone who has never smoked and is of the same age.
Anyone know? 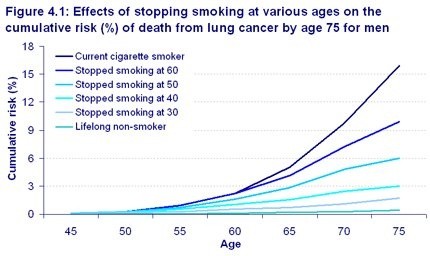 Even if the smoker quit at a fairly young age, they still face a significantly elevated risk over lifelong non-smokers.

when AMA et al came out with unsubstantialed estimates (guesses) of 400.000 deaths in base of 50 million smokers, that works out to 1/2 of 1 % if we accept these dubious deductions (if I get killed by car while smoking cigarette, is that smoking related?), then risk should be negligible. Recall that Eubie Blake lived to be 100 while smoking every day… Also, Cecil previously commented on study re: second hand smoke.

Its not just cancer which rots your lungs. More people get COPD. Most longtime smokers have some. Basically you asphyxiate.

I quit at about 50, twenty years ago. I have excellent CV function. This summer I hiked a rugged trail from 3500 to 7000 feet and back. I couldn’t do this in my 50s. Every year I get a low dose CT scan of my chest. Everyone who smoked should. Meanwhile tobacco should be banned and pot should be legal. It much worse than heroin.

This thread is a few months old, sorry I didn’t notice it at the time.

To address the OP, please see my post here, which describes the extensive study of smoking in British doctors, latest results to be found here:

If you page down, there is a section Mortality on stopping smoking. Look at the survival curves in Fig 4. They show that if you stop smoking before age ~40, your risk drops back to almost the same as someone who had never smoked. If you stop at age ~50, your risk still drops significantly, but ends up more like halfway between non-smokers and continuing smokers. This assumes, of course, that you didn’t quit because you already had a serious disease.

I stopped when I was 39, and I found it psychologically really helpful to know that statistically I had a “mulligan” - if I kept off them, my risk would drop back to almost the same as if I had never smoked.

And a footnote that fedman’s post #4 above is nonsense, and his ignorant “guesstimate” that smoking isn’t really all that bad for your health has been extensively rebutted in the thread linked above.

Even if the smoker quit at a fairly young age, they still face a significantly elevated risk over lifelong non-smokers.

Yay 3% for me! I can breathe easy knowing that. I’m probably more likely to be hit by a car on my bike before I die of lung cancer.