Of the entire electromagnetic spectrum, we humans only percieve a very narrow range of frequencies/wavelength with our eyes.

Suppose we were to assign false colors to the frequencies/wavelengths invisible to us, such as “colorizing” ultraviolet as red, and infrared as violet, and continuing this colorization extension throughout the EM spectrum…a continuously repeating rainbow: …ivroygbivroygbivroygbivro…

Obviously, no camera or film can do this alone: we would need an entire range of EM sensors and a computer to combine the images.

Suppose we wish to image a galaxy in the full spectrum…from radio waves all the way up to gamma ray and cosmic ray frequencies.

What would we “see”?

People already have done this sort of thing, printing pictures taken in various types of IR light with our ordinary spectrum made to fill the places of those unperceivable bands. Exacvtly how it looks depends upon which colors you use to substitute. If you put in bright primary colors you can make a scene look like a 1960s day-glo poster. If you take an aerial photograph that’s shot with IR film or an IR camera and color the light reflected from vegetation with green it looks pretty darned normal.

I hear you proposing two different things, one of which is mapping wavelengths we don’t see into ones we do, and the other of which is using a list of colors that keeps cycling as part of the mapping scheme. The second thing is weird and obscure, and I think it would create all sorts of hard to predict optical effects that are just uninteresting accidents of the particular choices you made.

But the first thing is quite important indeed, in many fields. Aerial photography with multiple wavelength bands, especially into the near infrared and even longer, as well as satellite versions of same, is fascinating. You should google “thematic mapping” for some of this. It’s done in astronomy, too, and I think I’ve seen images of the Crab Nebula in wavelengths from the short thermal infrared well into the gamma wavelengths.

A critical point: depending on your technology I guess you could select out a billion or so wavelengths for imaging, but your eye only has 3 color channels, and those are not cleanly separated.

Another critical point: some people do this and apply principle components analysis to generate the channels you look at, and each of these is a linear combination of all the raw wavelengths, which can include negative multipliers.

Suppose we wish to image a galaxy in the full spectrum…from radio waves all the way up to gamma ray and cosmic ray frequencies.

What would we “see”?

Super Vision: A New View of Nature, by Ivan Amato

Every photographic method you can think of is represented (including many I couldn’t have thought of), including ordinary light photography, x-ray, infrared, plane-polarized, electron microscopy, magnetic resonance imaging, and a photo of Washington, D.C. using something called Interferometric Synthetic Aperture Radar.

Take this composite image of the sombrero galaxy: 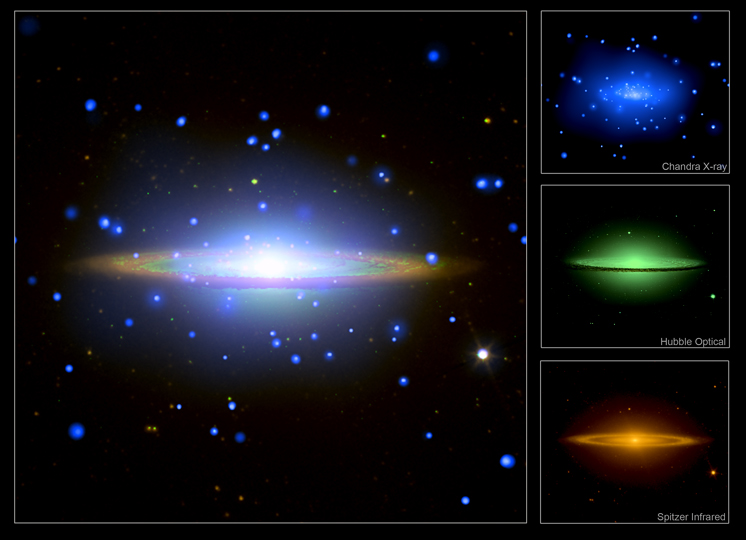 How much more information could we gather if this image was full EM?

Take this composite image of the sombrero galaxy:
http://chandra.harvard.edu/photo/2007/sombrero/sombrero.jpg
assembled from infrared, visible, and x-ray wavelengths.

How much more information could we gather if this image was full EM?

I’m not sure if you’ve seen this image of the Milky Way (here’s a larger version, but without credits, from here), but that should give you an idea of the view at several of the most popular imaging wavelengths.