I’m looking for a list of fake car makers and models used in film and television. In the days before product placement of Ford and Chrysler cars was common, and especially if there was any bad aspect to it, a fictional maker or model would be created. The only example that comes to mind is the fictional car maker in the novel and film The Betsy, and the whimsically fictional cars, guns and other products from the Nero Wolfe novels.

Anyone recall any notable film and TV car fakes?

The Wagon Queen Family Truckster from National Lampoon’s Vacation.
The Pursuit Special from Mad Max.
The Hirondel from The Saint.

There was a “Durango” in A Clockwork Orange.

No, but you can include the Canyonero.

They also had a Canyonero SUV.

The Simpsons had the Canyonero SUV.

You didn’t mention video games, so disregard this if you wish, but the Fallout franchise had the Chryslus Motors brand (with such models as the Highwayman and the Corvega).

All of which, if found in the post-apocalyptic wastelands of 200 years after the global nuclear war that ended civilization, may still have an intact but amazingly fragile nuclear power plant that will explode spectacularly if you shoot or strike the car. As a corollary, these make terrible cover if sheltering from enemy gunfire. Because, you know, NUCLEAR EXPLOSION. :smack:
ETA: Aaaaand ninja’d because of my excursion into video game land.

Bob’s RV Roundup sold the Ultimate Behemoth, the one Homer bought I don’t think had a brand. Flanders had the Land Behemoth model which appeared in 2 episodes and mentioned in another. Homer bought a no-name RV again in “Mobile Homer”.

The Mr. Plow vehicle is made by Kumatsu Motors but doesn’t seem to have model name.

Most cars shown in the Simpsons don’t have a brand name. E.g., I don’t think the electric car in “Beyond Blunderdome” had a brand. Several cars are ~based on real cars or actually are real, e.g., Mr. Burns’ Stutz Bearcat.

Then there’s the Malibu Stacy car.

On SNL in olden times, they had a car ad parody for The Adobe.

There’s the Tumbler line of urban assault vehicles from the Batman movies… might well have a Wayne Enterprises brand on it, which would also be fictional.

The Hannibal Twin-8 and the Leslie Special, both from The Great Race

Knight Industries had a year 2000 model, known as KITT…

How I Met Your Mother has the character Marshall driving from the Twin Cities to New York in a Monstrosity Sport.

The Dick van Dyke Show had Rob buying a 1964 Tarantula – nicknamed “a T-Bug.”

If games are okay, then the Grand Theft Auto has tons of these. Some persist throughout games, and you can sometimes tell who they’re ripping off. E.g. list for GTAIV. The makes are shown if you click on each car. One that stands out in my mind, and hasn’t actually appeared in the games, is the Maibatsu Monstrosity (a SUV of course).

I wonder what brand it is that gets 40 rods to the hogshead. 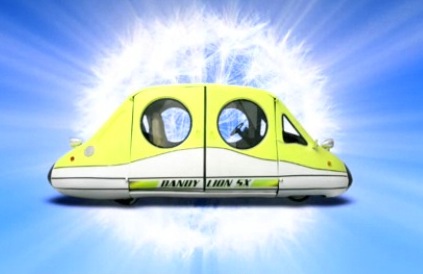 The Dandy Lion SX is a fuel-efficient, eco-friendly and dangerously defective "car of the future" that runs on fuel made from dandelion weed. Designed by Dandy Lion Worldwide Industries, which invested millions of dollars into the sleek and stylish...

The British Zeus (pronounced Zee-us), an absurdly large car, shown only in an animated test commercial, in The Magic Christian (1969), starring Peter Sellers.