If it’s true, I’m kinda surprised they didn’t just cut out Bucky saying “vaccines” when he breaks into the truck. He already said “medicine” so they could’ve just left it at that.

Also, how is there no traffic on that massive bridge leading to the giant cyberpunk metropolis?

And why is there signage in (Indian) devanagari script, and why does the bridge traffic seem to be driving on the right when both India and Indonesia drive on the left? (Because it was actually filmed in Atlanta and/or Prague, of course, but still.)

I just noticed something, and I’m wondering what it could mean.

On the Punisher show, Amber Rose Revah played a character named Dinah Madani. According to IMDb, both last names are spelled the same.

That can’t be a coincidence, can it?

I’m inclined to think it is a coincidence - Dinah Madani was born and raised in Brooklyn, according to the MCU wiki page, and is much too young to be Donya. Donya is in Latvia, apparently; Dinah’s family is from Iran, so they’re unlikely to be blood-related.
Just saw the latest episode, The Whole World Is Watching.
We still don’t know who the Power Broker is; with two episodes left, I’m suspecting that’s something that may get left unresolved in this series.
John Walker…well, he went way off the reservation, with many witnesses, and much recording of his acts. Looks like he took the last super-soldier serum a bit before that, the other vials having been destroyed by Zemo.
I suspect that the last two episodes will be more concerned with him and the Flag-Smashers, and not so much with the Power Brokers. Whether Walker will resign in disgrace, or will fight…I don’t know.

I don’t think that Walker will resign, and I think that Bucky and Sam are going to have to “put him down” in the last episode, with Sam finally taking the shield and the mantle of Captain America.

Whether they’re sanctioned by the government to get Walker or not, he’s on borrowed time

The comics context makes this unlikely, but to say more would be spoilery.

Hard to say. The show, at least, has striven to show that Walker isn’t a bad person; he’s got his faults (arrogance, ego, and a short temper), but he does want to do his best to live up to the ideals, IMO.
Unfortunately, he’s been a power all of his life - unlike Steve. He doesn’t respect that power.
The plain fact is that he’s just not up to it, and the power he’s wielded, and now will wield (with the addition of the serum), is corroding him. Will he realize that (with Sam’s help, perhaps), or not?
All IMO, and of course I’m guessing…

ETA: I’m not entirely discounting the comics, but the MCU has certainly shown it’s willing to change things about and tell their own stories, so I’m not relying on them either.

The final scene this week sent chills down my spine. That’s the statue of Josef Jungmann in Prague. When I lived there it was the place I always arranged to meet friends. It’s central, but not too touristy and there’s a great little bistro that does good coffee if you have to wait. I miss Prague!!

No big surprises this episode (Walker taking the serum was telegraphed from miles and miles away), but it was still a lot of fun. The character Walker is an arrogant, overconfident jerk, but I’m really enjoying the portrayal, and I hope the MCU keeps him around rather than killing him off in this series. Having a very flawed, yet not totally morally bankrupt, person with super powers, would be an interesting dynamic.

The show’s losing me.

Really, the Wakandans and Walker/Battlestar all want Zemo back in jail and they fight … without keeping an eye on him?

Really, Karli and company who have a stated tactical goal of killing not really Captain America are suddenly horrified and scared because they killed the sidekick? Not pressing the huge advantage then and there? Really?

Serum destroyed (or so believed), Flagsmashers not evil, what ends currently justify the Zemo means?

Was more than half expecting Zemo to power up when he got the vials. Power in the hands of others is bad, but my having it would be good!

The shield, the symbol, being used to murder, dripping in blood? A bit too overt and heavy handed for my taste.

The problem for me this episode is that Sam didn’t call Pepper or Hawkeye or Rhodes (or even Scott) immediately when Sarah was threatened. I can wrap my head around not wanting them to bail him out of financial trouble. (I might not agree - but I can buy the argument.) But any of them would take his call and have the resources to keep his family off the grid and safe from physical danger until the threat was over. “Pack a bag and go hide somewhere” is stupid when you can say “Pack a bag; War Machine will be there in 30 minutes.”

I agree with a lot of what’s being said about the show’s increasing narrative choppiness, but kudos to Zemo for at least staying loyal to his stated ideals. He could have grabbed the serum for his own use, but he destroyed it without a moment’s hesitation.

It’s nice to see villains who actually have at least some sense of principle, even if they aren’t particularly good people.

Zemo is definitely the best part of the show, but it detracts a little from the character that he’s being handled so cavalierly by the others—I mean, really, here’s the guy who destroyed* the avengers, and the justification for getting him out of prison and keeping him around, which has been flimsy from the beginning, just keeps eroding more and more. Nobody’s even bothering to keep an eye on him when they ever-so-subtly question the local Latvians for Momma Donya; he can just slip away during a fight, and on and on.

However, I did feel like this episode hung together somewhat more—perhaps largely because it consisted mostly of the expected beats, but the only thing I couldn’t really place was why Momma Donya is such a big deal; it seems like there’s a whole backstory missing there.

*thanks for the reminder, @DigitalC

The last two episodes were WTF?

The tonal shift in characterization are so jarring that my head damn near fell off. Just last week our heroes were casually murdering henchmen. But this week Sam is back to playing the PTSD counsellor from the movies, asking us to be sympathetic with the terrorist who murdered three people in a bombing the week before.

I mean, I get it. I know exactly the direction and the arc they are going for here with Sam. But the whole thing has turned into a convoluted mess. They’ve completely screwed up the world building. How are we just finding out now what “a world without borders” really means? How are we supposed to be sympathetic to the Flag Smasher’s cause (and why Sam understands where they are coming from) when that is all revealed in a couple of lines of dialogue after we saw them blow up and kill three innocent people?

And the thing is I really liked Karli’s character and the direction I thought they were going to go with her character. But then she murdered three people and that changed everything. But the writers are pretending that that act didn’t change everything, because the writers have decided those three lives, just like the henchmen they murdered last episode, are incidental to the story.

Imagine how things would have played differently if Karli hadn’t killed those people last episode, but everything else played out exactly the same. We wouldn’t be having the tonal whiplash when Sam expresses sympathy for her. And when Karli accidentally kills Battlestar (assuming he is dead) that moment lands so much harder. It would completely recontextualize the direction of the story and make it more nuanced and compelling.

I think a couple of things play into this. Firstly, I think the video upthread that speculated an entire plotline has been surgically removed from the series is probably correct.

But secondly the showrunner for the show isn’t that experienced and I think was just out of their depth here. Feige has taken a punt with a lot of their choices and most of the time those punts have paid off. Taika Waititi was the perfect choice to revitalize the Thor franchise. WandaVision (despite many valid criticisms) held together as a narrative whole from start to finish despite the relative inexperience of the showrunner Jac Schaeffer.

But Spellman doesn’t hold it together here. And I’ve just had a look at the credits for the rest of the writing team and…I was a bit taken aback by how light the resumes of the writers actually were. There are no journeyman TV writers in the writers room and I think that shows with what we are seeing on screen. It’s a lack of experience more than anything else.

I liked this episode much better than the last. I was not really looking forward to it, but it delivered some interesting moments and that’s all I’m really asking from the show at the moment. I agree the writing is inconsistent. But I think this was the best episode so far.

You asked for it, you got it. In response to overwhelming demand, Marvel have released the Zemo Cut.

All Zemo! All dancing! All the time! 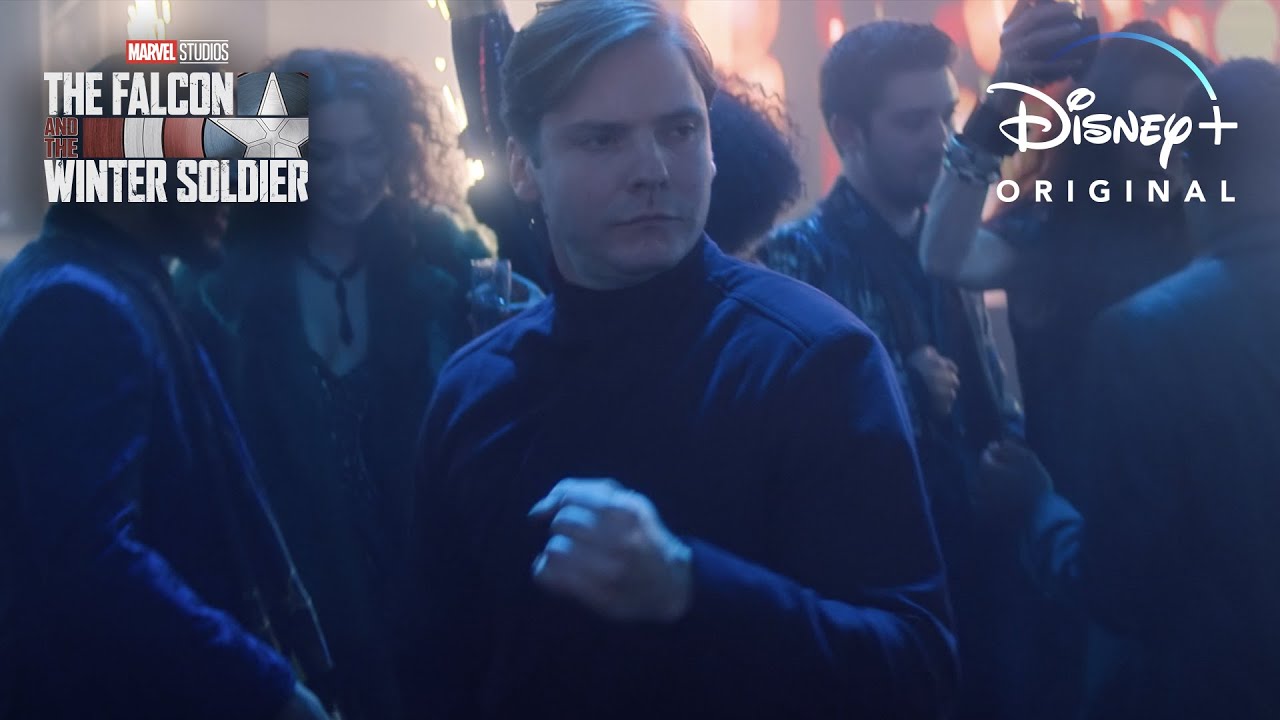 Daniel César Martin Brühl González Domingo can really bring that Spanish fire to the dancefloor if need be!

It seems that Walker isn’t a super solider or wasn’t one up until this ep. I just assumed that he was going in going by the way he jumped out of that helicopter onto the moving semi plus the way he was throwing the shield around.

Well Battlestar did the same thing, and Cap obviously thought Sam could handle the shield without any serum.