I believe he was already dead…

I suspect insurance companies would go bankrupt a

Supe damage would be a extra rider, like earthquake insurance in CA.

They (DC, I think,could be Marvel) did a series of comics called Damage Control.
It was a humorous mini-series starring the agency who has to follow the supes around, clean up demolished buildings, and pay off the people whose property was destroyed.

Ah, yes. Pilinixi the Dexitroboper. I didn’t even need to look that one up. A memorable scene for me, the first time I read it, decades ago. Virgil Samms, the First Lensman was hunting for other potential lensmen, and encountered Pilinixi, who went on to demonstrate what dexitroboping was, but it was utterly incomprehensible to Samms, despite the lens.

Marvel. Damage Control, Inc. made brief appearances or was referred to in passing in a number of comics before they got their first miniseries (they’ve had four so far, and have appeared in back-up stories in several other comics). They’ve received investments and technology from Tony Stark, S.H.I.E.L.D., and Mr. Fantastic, among others, which allows them to quickly clean up and rebuild after super fights, sometimes literally overnight. Their miniseries have been mostly humorous, but they are a part of the official continuity.

I’ve always thought I’d be well suited for a job with a “00” license.

I wanted to work for UNCLE.

I could solve a mystery in a quaint town every week.

. I suspect insurance companies would go bankrupt and FEMA’s budget would be huge.

Massive widespread damage is one of the reasons insurance companies exist!

When there’s a major weather event, insurance company profits go down, then recover to a higher level, as all the potential customers are reminded that yes, having insurance is a really good idea.

Yes, the house is haunted. Yes, it will try to kill you because they either: Didn’t move the graves, but only the headstones; Built it out of cold-riveted girders with cores of pure selenium; Didn’t give a previous occupant enough to do other than play hide-the-hatchet with his daughters and his wife; Pick your own reason, because the walls are bleeding and you’re pretty sure the hallway shouldn’t lead into a bedroom after having made that last turn. Regardless, the agent who hired you has to move it, and knocking off ten percent ain’t gonna cut it. Load up and do some spectral remediation, bucko!

I read a short story recently about a real estate company in an acknowledged-urban-fantasy world (i.e., pixies, vampires, etc. exist openly, and are subject to things like equal protection laws). One condo they were trying to sell was previously owned by a pair of wizards who went through a very ugly divorce, and at some point, one of them cast a curse that caused the walls to be constantly crawling with cockroaches. The cursebreaker they hired told them that there was no way to lift it short of the couple making up or tearing the building down to its foundations: The curse was way too deep-rooted for anything less. But they were eventually able to sell it, not by lifting the curse, but by altering it, so the walls were instead covered with butterflies.

Shame about the never-ending supply of butterfly shit.

I’ve always thought I’d be well suited for a job with a “00” license.

How could you possibly secure a “00” position when you can’t even spell “licence,” Mr. Bont?

I believe he was already dead…

You’d think in an acknowledged-urban-fantasy world like that, they’d be able to find a potential renter, a troll or something, that would consider a never-ending supply of crunchy snacks to be a selling point…

Worst. Fictional. Job. EVER! Charlie Bucket’s dad was employed in a toothpaste factory screwing the tiny little caps on the filled tubes.

There was a time when that was a real job. Lots of assembly line jobs were completely mindless drudgery.

Those animals are sentient. Presumably they go to vocational school. 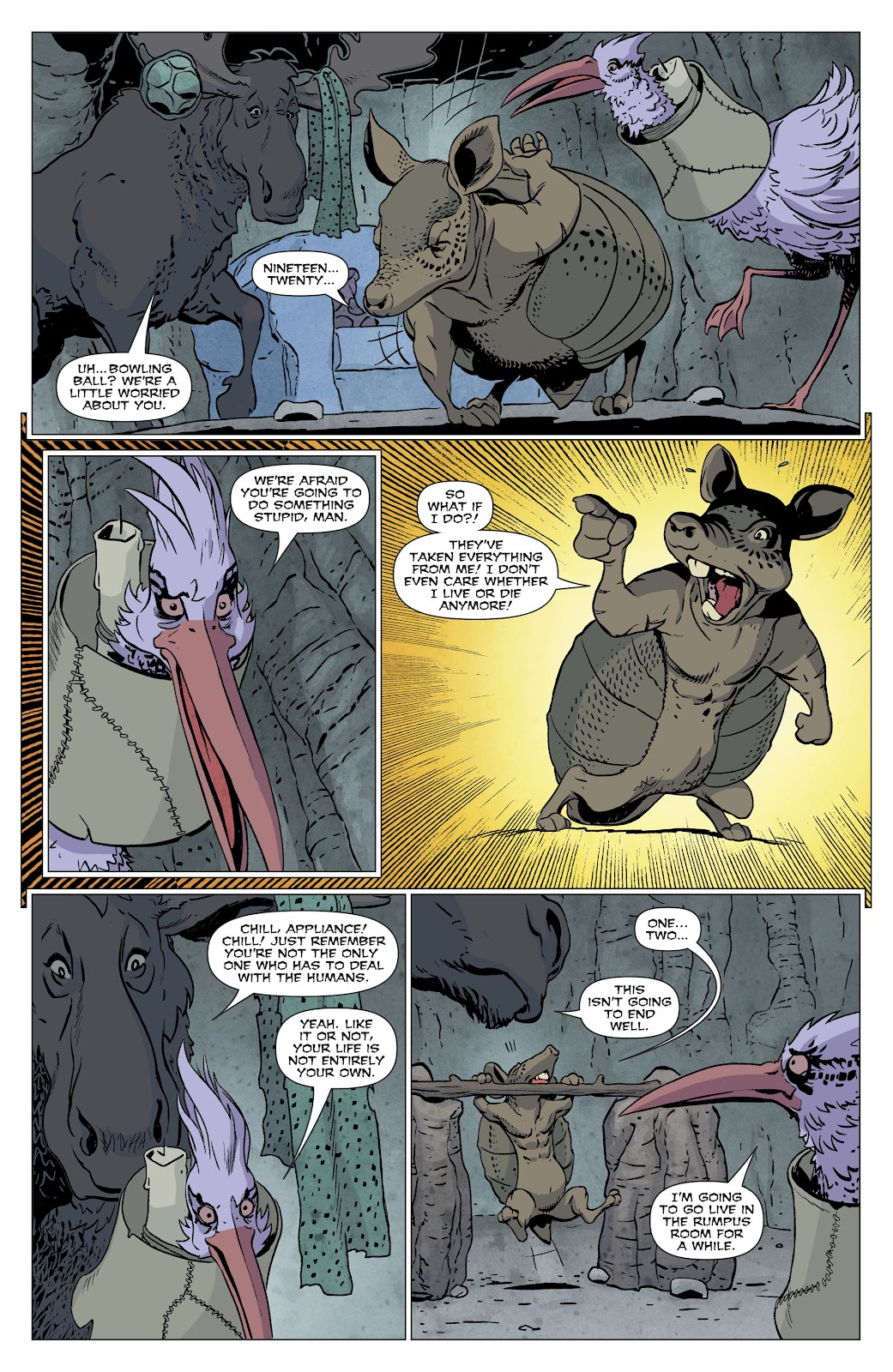 And all of it a wry commentary about how many of the production line “good” jobs of the era could be done by barely sentient animals. Who says Flintstones was aimed at kids?