Robbie Coltrane in “The Pope Must Die”, simply credited as “the pope”.

The Pope in Ren & Stimpy was voiced by Frank Zappa.

He was rescued by Powdered Toast Man, who told him to ‘cling tenaciously to my buttocks’. The Pope did.

We also have the Monty Python Michelangelo sketch with John Cleese as the Pope.

There’s the unintentionally hilarious Hadrian the Seventh by Frederick Rolfe. It’s a work of narcissistic wish fulfillment by Rolfe, who was seriously aggrieved at not being allowed to become a priest. He imagines the main character (who is clearly him with a different name) being unexpectedly appointed pope, and then solving all the world’s problems.

Rolfe’s arrogance shines through - there are a couple of pages where he describes how Hadrian VII solves all international political problems in one go (basically by colonising France and Russia). I like to read them over again and again for their hubristic stupidity.

I think Godfather III featured the Pope at some point.

My memory is that it was someone portraying John Paul I.

Interestingly (sort of, if we’re talking about fictional popes), while the pope character in GF3 is John Paul I, the cardinal in the movie who will become John Paul I is fictional. Cardinal Lamberto in the movie, Cardinal Luciani in real life.

A Canticle For Leibowitz gave us the Denver Papacy and around 1700 years worth of associated popes.

If we count folklore, there’s Pope Joan. The legend says a woman hid her sex and rose through the ranks to become pope. She got pregnant, went into labor during a parade, was discovered by the masses and torn to pieces.

Hence the (mythical) tradition by which it was ascertained whether a new pope was fully equipped as a male. There are varieties of plum and fig in France known as “Couilles du Pape” (i.e., “Pope’s Balls”), and you can buy a jam.

Archer had an episode involving the Pope (and a Counterfeit Pope). Things do not go well.

(and a Counterfeit Pope). 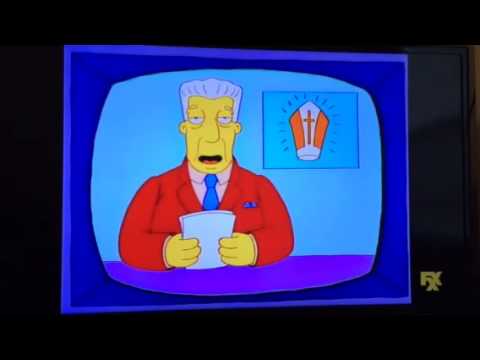 David Lodge’s The British Museum Is Falling Down (1967) has a fantasy sequence where the main character imagines himself as Pope Alexander VII, who issues the encyclical De Lecto Conjugalo to approve birth control.

Angels and Demons: the Dan Brown book that became a Tom Hanks movie. The Pope dies at the beginning. I don’t remember if they ever name him, but they then pick a new Pope, and it ends up being Ewan McGregor.

Just a couple of days ago, the webcomic Girl Genius had mention of a historical Heterodyne (dynastic family of mad scientists) who hid his villainy for long enough to become Pope, before ransacking the Vatican.

I recently read a science fiction story that I thought was by Clarke, wherein the rich protagonist has himself cryogenically frozen until a cure for his deadly disease is found, and the only institution he can think of with enough longevity to ensure his caretaking is the Church. So he leaves his entire estate to his brother, a priest, who eventually uses the influence that comes with all that money to become Pope, and to spur the research that leads to the cure.

Back in high school, I acted in a play called “The Day they Kidnapped the Pope” (I was the kidnapper), but I can’t remember if the Pope was named in that, or just assumed to be whoever-the-current-pope-is.

And of course, there’s a lot of folklore about Pope Peter the Second, who would supposedly be the last pope before the Apocalypse (Pope Peter the First, of course, being the Apostle, who’s reckoned as the first pope). IIRC, we’re now past the point in the list of popes where Peter II is supposed to fall, but it’s not like that’s ever stopped any end-of-the-world doomsayers before, so the story has probably been updated.

And of course, there’s a lot of folklore about Pope Peter the Second, who would supposedly be the last pope before the Apocalypse (Pope Peter the First, of course, being the Apostle, who’s reckoned as the first pope). IIRC, we’re now past the point in the list of popes where Peter II is supposed to fall, but it’s not like that’s ever stopped any end-of-the-world doomsayers before, so the story has probably been updated.

IIRC That’s the Malachi prophecy. OTTOMH I can’t remember if we’re on the second to last pope (‘of the olive branch’) or whether we’re on Peter II

Just yesterday, I re-watched an episode of the revived Doctor Who, “A Good Man Goes to War”. In the 54th century timeframe of the story, the Pope is a Papal Mainframe, apparently identifies as female, and commands the Anglican Marine Corps.

And incidentally, they’re absolutely stunning television (above and beyond Jude Law

There’s Malachi Martin’s demented conspiracy-theory novel,* Windswept House, in which the Pope is never referred to by name, but only as “the Slavic Pope,” so it’s pretty obvious who Martin is basing the character on.

* I mean, seriously. It makes The DaVinci Code look like actual church history.

There’s the book Conclave, by Robert Harris (author of Fatherland and Pompeii), which is a terrific story of the Cardinals gathering in the Vatican to select a new Pope, with quite surprising results. Contemporary setting. Heartily recommend.

In Babylon 5, the leader of the space station, Captain Sheridan, starts to become the object of a personality cult. Chief Garibaldi is appalled. At one point, he shouts, “He’s not the Pope! He doesn’t look anything like her!”

And incidentally, they’re absolutely stunning television (above and beyond Jude Law

Oh, dear. You’ve sussed me out.