they have Black and Jewish friends after all (!)

They had Black and Jewish friends…

There is the expectation of privilege here on fullest display. The very idea that THEY could be held accountable is unimaginable. They are the patriots! The good guys! The heroes saving democracy! Some I think are honestly shocked at the extent of the anger at this.

Like fraternities who have facilitated rape or deadly hazing they need to be completely shut down to learn that they are not that privileged after all.

I hope Florida Man was watching as Nancy Pelosi signed the article of impeachment against Donald Trump upon the very podium he tried to make off with.

(eye twitch) It’s a lectern. The podium is the raised floor area where one stands to speak.

Yeah, yeah, I know, that etymological ship has sailed.

We could grandstand about it for dais but this isn’t the right platform for it. At some stage I’ll consider my arguments and rostrum for you.

(eye twitch) It’s a lectern. The podium is the raised floor area where one stands to speak.

Yeah, yeah, I know, that etymological ship has sailed.

Trump supporter dead in suspected suicide days after being arrested at...

An Atlanta medical examiner has confirmed the death, which followed the man’s arrest last week

As I said earlier in this thread, some of these rioters are comical. Others are discovering the real consequences of their actions.

Dead fellow was apparently a “regional portfolio manager at a North Carolina bank”. May have realised that a conviction on federal rioting/trespass charges would not have been a career positive move for someone in the banking industry.

We do not represent Adam Johnson (pictured below), who is being held at the Pinellas County Jail. But if we did, we would recommend that he not take the stand at trial. Follow us for more legal tips.

Confederate Flag Guy has been arrested, along with his son who was also present: 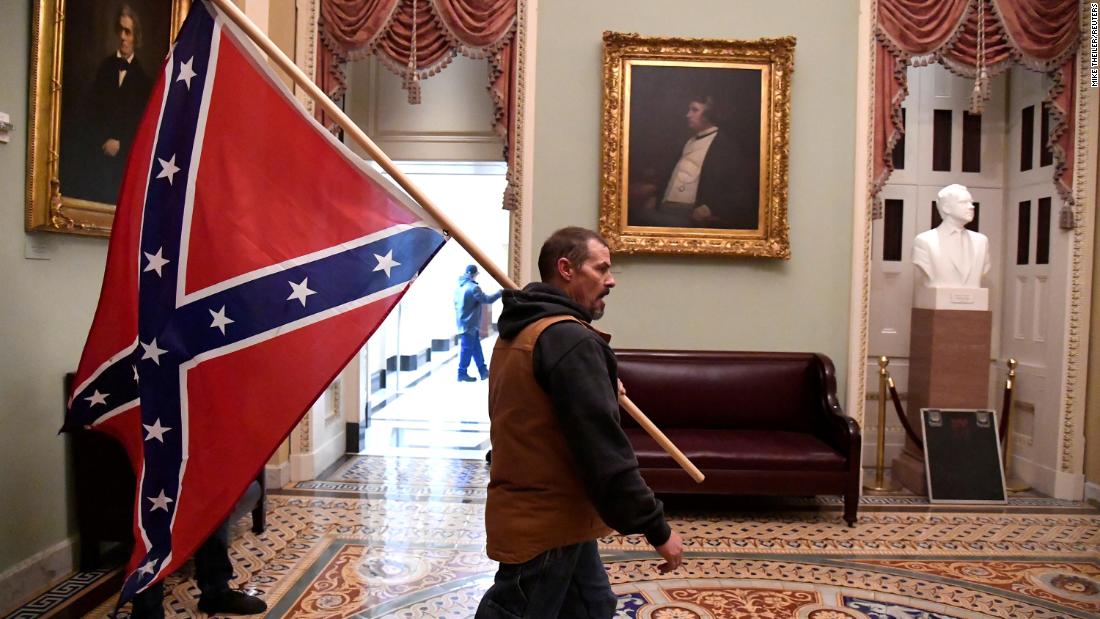 Man carrying Confederate flag inside the US Capitol during riot arrested,...

The FBI has arrested Kevin Seefried, seen carrying a Confederate flag inside Capitol Hill, according to a federal criminal complaint.

Apparently the son was bragging on-line about their participation, which helped the authorities find them. Perhaps not the best course of action?

The prosecution of these assholes has got me nostalgic for the Malheur saga, where no one was hurt until the dumbfuck committed suicide by cop. It’ll still be entertaining to see how it unfolds, but what happened takes all the fun out of it.

What’s the point of being an asshole if everybody doesn’t know you’re an asshole?

Guy on the Senate floor with a bloody face has been charged.

Leeds man charged in Capitol riot, identified by blood on his cheek

Court records describe Black as being in the Senate chamber wearing a red hat, camouflage jacket, and yellow gloves, and appeared to be bleeding from his left cheek.

I think that this attitude is epitomized in the oft linked video of onion girl. Who got pushed and maced after getting just one foot inside the capitol, when all that she was trying to do was storm the capitol and be part of the revolution. Totally unfair! Just because we want to violently overthrow the government and execute law makers doesn’t give you the right to be so mean to us!

The stupid shows no signs of diminishing.

Just watch–I bet somebody somewhere will soon be claiming that he was actually murdered by Antifa.

Keeps breaking up, but he seems to be blaming Trump - says his client is asking for a pardon from Trump, because his client says he was doing just what Trump was telling them to do.

So, if Trump grants the pardon, is that an admission that the mob was in fact just responding to his incitement?

“I said it, the mob did it, but that wasn’t what I meant. Those poor innocents misunderstood my message. So I bear no responsibility. At the same time, I must pardon them to prevent the miscarriage of justice that would follow if these good people were tried for their misunderstanding. That so many got it wrong shows how easy it was for any one person to make that simple mistake.”

But pretty much exactly what he/they will claim. Just not articulated nearly as clearly as I did. (Not that I think I did any good; just expecting Trump’s usual anti-skill at clear speaking / thinking.)

A man who donned fur, horns and red, white and blue face paint while storming the Capitol last week is now requesting a pardon from President Trump.