Flying - Would You Rather

You consider yourself to be in a higher-than-average risk cohort due to age and/or a couple of potential underlying conditions, neither of which really cause you problems on a day-to-day basis (ie. they are controlled by medication).

For a transcontinental non-stop flight, would you rather:

Fly now in a first class section where there are ten seats available but you know only two will be booked, only 50 of 138 seats will be booked in the main cabin, and masks are required. You have an N95 mask.

A 50% effective (whatever that means) vaccine is available. You are eligible to be vaccinated soon after one is available, and get it. But the plane will be full and masks will not be required. You would be flying in the early timeframe of overall vaccine distribution (ie. your cohort is eligible but it has not been distributed outside that cohort). You will be in first class where there is more separation (but not nearly as much as in scenario 1). You have an N95 mask.

Waiting until everybody who wants a vaccine has gotten it is not an option.

I would take door number one, hydrate well the day before, then eat well before flying and try to keep the mask on the entire time. I’d limit fluids to try to avoid unnecessary trips to the bathroom as well. (Hence hydrating well the previous day.) Keep in mind that, although I really do think that is the better option, I also am someone who likes a lot of personal space, so full airplanes already have a big downside to me.

Yeah I am leaning heavily towards #1 right now.

I think flying on a plane that’s 1/3rd full and everybody is masked is better than a full plane where masks aren’t required and you’re vaccinated but most of the other people aren’t.

Doesn’t account for positivity rate near term vs. later, but near term will be known and is currently at an acceptable level to me.

Professionally speaking, the former seems like a fantasy scenario. The latter is a different sort of fantasy.

Setting aside the silly scenarios …

IMO universal masking is far more effective than a vaccine distributed to just a few, even if you yourself have been vaccinated. A lightly loaded plane is better than a full one, but a larger issue is how full are the airports at both ends.

The biggest issue is the one you left out: what is the prevalence of disease in the populace at large on these two different dates. E.g. Depending on the cities involved, an empty airplane in June was more dangerous than a full airplane is in Sep. Because such a larger fraction of people were diseased in June.

Scenario 1 is not a fantasy, it’s pretty much what the particular flight I’d be on has looked like on a daily basis for the last 2 months, I check the seating charts every day. It’s JetBlue, they are blocking aisle seats in first class and middle seats in coach through 10/15. They also block/reserve 18 other seats in coach. This chart is for the flight on 9/22, there’s currently 2 seats booked in first and 24 in coach.

Departure state requires 14-day quarantine or a negative test upon return, that’s why the seat count is low. Flight has been departing the gate 10 - 15 mins early most days. 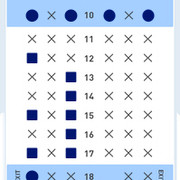 I’m not sure what part of scenario 2 you consider fantasy. I am assuming that mask requirements will be dropped before they really should be. That may be wrong, but it’s my scenario.

I agree about disease prevalence. Departure is from East Coast where all surrounding states’ positivity rate is currently under 1%. Return is from an area where it’s currently around 7%, not ideal, but acceptable to me as far as traveling there. And assumption that most pax on the return flight are returning home and are Covid-cautious.

Boarding back to front, if I arrive too early, I should be able to just hang around outside the terminal and then be through security and in my seat in 10 mins or less and we should be taxiing a few minutes later.

As to scenario #1: Interesting. Thanks for the cites. NYC (?) seems to be a real outlier.

I traveled 4 legs on my carrier as a pax last week albeit not to/through the northeast. Two were 100% full; every seat including extra staff on the otherwise unoccupied crew jumpseats. The other two had full first class and most coach seats full. Certainly no seats were blocked; had their been customers, they’d have been boarded.

Some airlines run a premium service from NYC to the west coast. e.g. JetBlue Mint. My carrier’s corresponding service is showing about 40% occupancy for all flights today (a Tue) as well.

Punchline being: You’re right and I’m all wet as to NYC transcons. As to almost any other itinerary you’re not going to reliably see half-full planes.


As to #2, I’m thinking that from the airline’s POV they’re far more worried about liability and about a revolt of their cabin crews. As a result mask requirements will linger awhile longer than they will at e.g. shopping malls. To succeed, the airlines must entice the scared-est passengers back to the airport, not the bravest. The bravest are already flying.

YMMV of course. The countervailing thought is that once one major airline drops masks, they’ll either lead the way (Freedom!) or be vilified (Irresponsible!). Hard to predict which narrative will carry that day.

By far the biggest determiner of when air travel returns en masse is when routine quarantines for travelers are ended. Which in turn requires rapid response tests that return reliable positives very soon after being infected.

Just for the record, it’s BOS. And this is after they consolidated two morning non-stops.

And I’ll throw in another scenario - what are the airlines gonna do starting November 4 when flights half-full of either frustrated or emboldened Trumpies shed their masks right after wheels up?

See how many keep them off once they are told disobeying flight crew directions is a federal crime?

They will do it.

I’d like to see how arresting 80 people on arrival goes.

Who says they make it to their destination? I believe they take that very seriously, and planes land to have unruly passengers taken off. I do not see the flight crew just letting that go, for their safety and to fulfill the conditions under which other passengers bought tickets. I certainly hope they’d give people 1 chance to remask and then land the plane and have anyone still refusing to obey flight crew orders removed.