No doubt because of the current energy shortages on the west coast I’ve been seeing a lot of press lately about fuel cells, and how they are a great source of ‘clean’ electricity.

I understand the basics of fuel cells - put hydrogen and oxygen in, get electricity and water out. Great so far, no nasty pollution.

Oxygen is freely available in the atmosphere. The problem is with the hydrogen. Yes, it’s the most abundant element in the universe, but we don’t have large deposits of it just sitting around. About all we can easily get to (until that routine shuttle to Jupiter comes on line) is already bound to oxygen in the form of water.

I know you can use electricity to crack water into oxygen and hydrogen, but now we’re to the part I don’t understand. If you have to generate the electricity to extract the hydrogen for the fuel cell, how are you generating that electricity? Aren’t you still relying on coal/natural gas/nuclear/whatever?

So how are fuel cells any real answer? If we change all of our automobiles to run on fuel cells and save all the pollution that would have been created from burning gasoline, won’t we in fact just have to burn something else to generate the power to extract the hydrogen in the first place?

So what’s the scoop? Is there another way to get hydrogen? Or are there economies of scale or something that still make it worthwhile to convert automobiles to fuel cells? Or are the news agencies doing there usual job of just skimming the surface of a technology story?

*Originally posted by Venkman *
Is there another way to get hydrogen? Or are there economies of scale or something that still make it worthwhile to convert automobiles to fuel cells? Or are the news agencies doing there usual job of just skimming the surface of a technology story?

No, yes, yes. Also, fuel cells would allow us to produce pollution further away from population centers, which may not be any better for the environment, but would be better for humanity.

Your observation is spot-on. Hydrogen gas is not available in nature, and a fuel cycle that consisted of using electricity to make hydrogen and then using hydrogen to make electricity would involve losses. Nonetheless, hydrogen could be used as an energy storage or energy transport medium.

No, fuel cells, which are genuinely close to market at this time (say 3 years), will be able to burn hydrocarbon fuels such as methane or propane, thanks to a bolt-on piece of kit called a reformer.

Not only are fuel-cells clean, but also highly efficient. Solid-oxide fuel cells in combined cycle promise fuel conversion efficiencies of nearly 70%, by far the best efficiency around. They’ll be expensive, though, eventually coming down to maybe $1000/kW, and they’re still not very big, so they’re not the solution to anybody’s capacity shortage just yet.

There are a few other ways to get hydrogen (from hydrocarbons, and I believe a certain fraction of natural gas is hydrogen (right, Anthracite?)) but you’ve hit the nail right on the head with your question.

Fuel cells are not the definitive answer to “the energy crisis”. Their advantage is their relatively clean operation and high power density. They could help to reduce pollution from automobiles but they don’t really solve the energy problem. They just move it from the car to the hydrogen manufacturing plant. 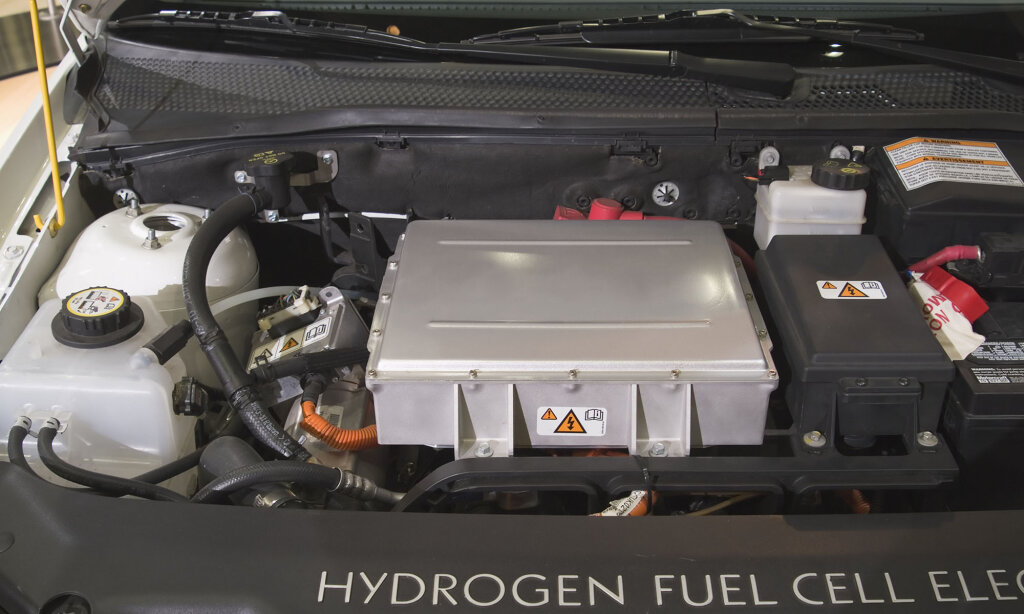 Why are governments, private businesses and academic institutions collaborating to research, develop and produce fuel cells? Learn how fuel cells work and how efficient they really are.

You’ll see that several sources of hydrogen are being considered, including natural gas and methanol. Any fuel with a high hydrogen content relative to its carbon content could be used, but not without problems.

[url=“http://www.internationalfuelcells.com/index_fl.shtml”]International Fuel Cells can provide you with one right now though it might be a little pricey.

I can not catch a break with my links this evening.

International Fuel Cells can provide you with one right now though it might be a little pricey.

Many thanks for the info. I hadn’t heard of a reformer before, it’s an interesting idea.

So all we have to do is figure out a cheap and clean way to extract hydrogen from seawater, and an efficient way to store the hydrogen (preferably in a liquid form) until it’s used, and we’re set. If somebody could just pull that together and drop it on my desk by Friday, that would be great…

*Originally posted by pluto *
**There are a few other ways to get hydrogen (from hydrocarbons, and I believe a certain fraction of natural gas is hydrogen (right, Anthracite?)) **

It is worth noting that large power plants can be more efficient than car engines as they tend to be run at their peak performance level, whereas cars are forever accelerating, braking, running from cold etc. Economies of scal may make pollution controls more economic at power plants also.

Hydrogen for fuel cells may be generated during periods of low electricity demand, thus evening out demand for the power suppliers.

Aren’t they thinking of storing the hydrogen, however you get it, in some “metal sponges” at high pressures? I’m not sure exactly how it works, but it involves packing the hydrogen in between the atoms of the metal. At least that’s what my physics teacher said today…

No, fuel cells, which are genuinely close to market at this time (say 3 years)

Just wanted to elaborate… Ford is planning on road-testing their fuel cell car in 2002, and putting them on the market in 2004.

And another question… don’t they already have cars that run on hydrogen (like in Germany), and the big hooplah is that the current cells under development are being designed to run on gasoline?

These people have an interesting approach to hydrogen storage. I’m not chemistry-savvy enough to be able to verify their storage density values, but it seems like a relatively safe and efficient approach, using fully recyclable materials.

Fuel cells aren’t magic, but they are an improvement over internal combustion engines in several ways.

I think the most likely scheme to survive for powering cars is using methanol (or gasoline or something) with an on-board converter (or ‘reformer’) to get the hydrogen out of the liquid fuel. So you still need to get the fuel somewhere (pump it out of the ground, or grow it).

However the fuel cell is more efficient. According to the link above, current designs gives up to 1 1/2 times as much useful energy as burning it (20% efficiency vs 30%); and I expect this will increase as fuel cell research continues.

More importantly, it’s much cleaner. You still get carbon dioxide released, so it’s not a solution to global warming (Unless you’re using methanol from agricultural sources; theoretically we could run internal combustion engines on methanol too, though). But with fuel cells there are no nitrogen oxides released, which are the major cause of smog (ground level ozone). And you avoid the soot and particulates that are a big problem with deisel engines.

The other benefit of fuel cells, mostly for non-automotive purposes, is that they don’t have moving parts, so more reliable, and they’re cost effective even in relatively small units (enough to power a house, for instance. As compared to a natural gas electric plant which needs to be large enough to power half a city before it gets efficient). This makes them great for backup systems and for powering buildings off of the grid. In these cases, the ‘create the hydrogen from electricity then turn it back into electricity’ cycle is clearly less than perfectly efficient, but the point is that there is no electricity available wherever you have the fuel cell. And it’s certainly cheaper and cleaner than putting a gasoline generator there.

(Now, I’m working on a breakthrough ethanol-powered cell, but seem to have trouble keeping enough fuel around…)

I recently saw a story on the internet (I couldn’t find the link again when I looked for it just now–sorry) about a device like a solar panel that, when submereged in water, would use energy from sunlight to break down water into hydrogen and oxygen. If they are able to perfect it, or at least make it more efficent, that could be a nice clean way to get hydrogen.

One of the most promising things about fuel cells is that they make intermittent energy sources economical.
A major problem with current solar, wind, or tidal generation schemes is that you can’t match your production to demand. Transmission is also a problem since the best locations to produce this power are often located far from cities that consume it. Since fuel cells are likely to be more economical than today’s storage options (like chemical battery cells), you can store up the energy from these sources and use it later.
This may still be quite a ways off, but it’s a good solution environmentally and the losses are not really a concern with solar-driven power generation, given the expected life of our sun.

I recall in one of my courses seeing a curve showing the historical ratio of carbon to hydrogen in mankind’s power generation. We’re of course moving from more carbon to more hydrogen (something like wood - coal - refined petroleum - methane - pure hydrogen was the outline); the historical trend doesn’t predict anything really, but if it did, we would be running on methane in about 100 years, and hydrogen in a few hundred more.

I couldn’t find ElDestructo’s direct hydrolysis solar panel, but I did remember and locate an article on another interesting potential source of hydrogen–algae. In the absence of oxygence or sulfur to complete the normal metabolic pathway for photosythesis, algae begins using an enzyme to split oxygen out of the water directly, releasing hydrogen gas as a byproduct. Researchers are looking for ways to increase the yield, which is presently fairly low; from the rather vague yields described in various articles I found on google, I’d guesstimate that you could fuel between 32 and 500 cars for a week with a one-acre, one foot deep pool. Based on a 1999 figure of about 132,000,000 cars, it would take at least 264,000 acres of algae to power them at current output levels–possibly as much as 4.13 million acres. Actual production facilities almost certainly wouldn’t be laid out flat across that much area, but that’s still a lot of algae–and it doesn’t even account for buses or trucks. It’s worth researching, though.