I use Round-up for poison ivy.

Sure, cool, for invasive / noxious crap like that - yeah - have at’er. Just hopefully nothing nice, that you wanna keep, is nearby. (and mask-wearing and gloves, which you probably already know)

When i had established pain ivy, i used a much nastier herbicide, with appropriate precautions. (And still damaged some other stuff.) Now i patrol for seedlings, and remove all the pain ivy seedlings a few times a year. If you get it before the 4th leaf or so, you can gently remove the entire root with one gloved hand.

My fruit trees are all coming into bloom, and I’ve ordered a few more raspberry canes. This is always a fun time of year in the garden.

Interesting - never heard that term for poison ivy before. It is a pain.

I mostly post here on my phone, and swype. That’s just a peculiar swypo for “poison”.

In the wildflower garden, the columbine is getting bigger and it looks like a few of the geraniums are up now too. Yay!

Our stretch of very cool spring seems to be over (we lurched from 35F to 90F in just two days) so I am starting my balcony garden. Still have a year’s supply of parsley dried from last year, so not doing parsley again this year. Checked out the herbs at work … eh, the weather had been hard on the garden center plants. Found a lone sage that looked viable and parked it on my porch to await re-potting. It’s perked up considerably with watering last night. I’m think of rosemary and basil, or at least rosemary.

Still have chard and lettuce seed from last year that should still be viable.

Already have a new bag of potting soil to replace that the feral cats, the squirrels, and the rabbits dug out.

Today I’m thinking of seeking out new herbs and getting some hardware cloth to make circular enclosures to keep the wildlife out of my pots, at least until the plants get established.

Still have a year’s supply of parsley dried from last year, so not doing parsley again this year.

The thing i like about growing parsley is that i always have a couple fresh sprigs available. And never have a mouldering bag of it in the fridge.

I grow lots of parsley so the swallowtails have a place to lay their eggs!

So the weather has finally turned full April and I think we’re ready to go this weekend, even though it’s going to rain.

Bought my containers, soil, some fertilizer pellets, and a few seedlings to get started. Got a couple of tomato seedlings, a red bell pepper, and taking a flyer on a honeydew, just to see if anything happens with it. Spent a long time online picking out seeds, and have a bunch of heirloom herb seeds coming in the mail tomorrow.

It’s all going to be up on the deck so I don’t have to worry about deer, but squirrels, birds, and other critters will be an issue. Probably just going to get some plastic sheeting and some scrap wood and use a corner of the deck as a framework for a simple greenhouse. There are inexpensive ready-made structures like this but I’m pretty sure that’s very flimsy and I’m certain I could build a better one for the same cost or less. 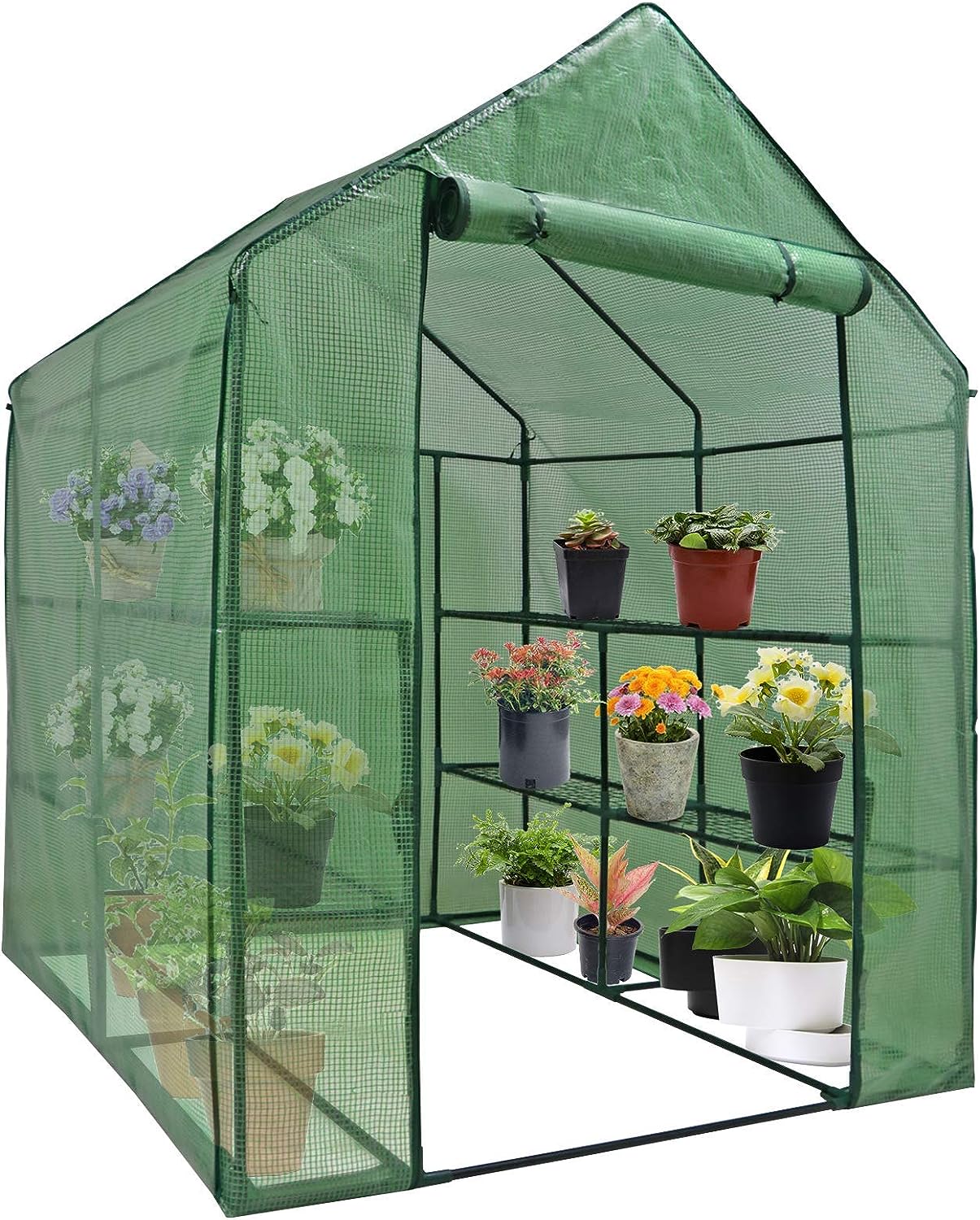 There are inexpensive ready-made structures like this but I’m pretty sure that’s very flimsy and I’m certain I could build a better one for the same cost or less.

They are flimsy. I bought one just to use the frame (it gets too hot here most of the year for the plastic cover to be useful), and I made a cover for it out of window screen. Then it snowed - and it doesn’t snow that much here - and the weight of a few inches of it on top collapsed the frame.

The tomatoes are growing nicely. I estimate they’ve tripled in size since planting. I’m guessing I’ll start seeing flowers in a couple of weeks. One zucchini has been growing like gangbusters, much to my sons’ dismay, but not to mine. I’m looking forward to grilled squash. Yum!