Going to New Orleans for a few days, what should I do/see/eat?

It is a quiet place, at least in my experience, but quite a nice tour. It is an old plantation restored and “modernized” in the 20s and 30s. If I remember correctly, it was the first private residence in the city to have air conditioning!
I think it is worth the visit. They are open again.

north and south? what are those?
Around here it is up river and down. Away from the river and toward it. Since the river isn’t straight, those reliable directions change in different parts of the city. It actually works once you get used to it and move past fixed compass directions.

Thank you everyone so far for suggestions! To answer a question asked upthread, we are planning on being there the second week of August, so we have plenty of time to plan and research all these great suggestions.

As for further suggestions, aside from being a much needed getaway from work, we’re also using it as a bit of a babymoon because Mrs. Cups is due at the end of September. Does anyone have any suggestions for a place I could get her a pedicure? She doesn’t need a full spa day with a massage or anything like that, but with the preggo belly she can’t work on her feet and I think a pedi would be great for her. (plus it would give me some time to gamble at Harrahs!)

Oh, and that thing I said about the clubs on Frenchman Street having no cover… I should have realized that’s changed since the pandemic. I went and actually looked at their website and now due to COVID restrictions you need to buy a ticket beforehand to see a band at the Spotted Cat and I assume other clubs as well.

I haven’t been back in so long that I don’t know if my favorite food stops are still there or good, but my must-eats are: shrimp po-boy, oyster po-boy, red beans and rice, crawfish if it is still in season, and snowballs. Don’t skip the snowballs!

I was disappointed in Mother’s shrimp po’boy but apparently the debris po’boy is good.

Mother’s is kind of overrated; for all the trouble it is to get in there, the food is just ok IMO.

I’m so jealous. I was in NOLA about the second week of March last year. You may remember this as the week that the horrors of the pandemic began to unfold. There was speculation they might have to cancel some NBA games for covid and the toilet paper shortage developed. Anyway, my companions and I had an amazing trip just as stuff was shutting down.

Main rec: the World War 2 museum was amazing. If you’re at all interested in this conflict, you have to go.

Second main: The aquarium. It was great. The seahorse nursery and luminous jellyfish were very cool and I enjoyed the penguin feeding live commentary.

We had no bad meals but some bites were unforgettable.

First was the grilled oysters from Felix’s. If you’re ok with oysters (and I understand some aren’t), you must get these from one of the better known places. I was all but licking the plate and I confess sucking shells.

Second, a muffuletta from Central Grocery is pretty much mandatory. It’s worth the hype. I bought three full sandwiches (clocking in at $70+) but the four of us got like three meals from them. For just two, I’d buy a half a half, unless you wanted more than one meal. I could never finish an entire quarter sandwich. They’re superb.

Third, seek a debris roast beef po’ boy. I enjoyed the seafood po’ boys but loved the super wet debris version I got from a place pretty far outside NO (in Houma). I doubt that place was a great rendition overall but it was amazing and there are probably even better joints closer to NOLA. It’s super messy, bring a change of clothes and a raincoat, lol. It really reminded me of my beloved Chicago-style Italian beef which is a huge compliment.

Pat O’Brien’s. Have relatively inexpensive cocktails in the courtyard. Food is decent, too, but a Sazerac is a must.

At least two nights during any stay we stumble into a bar, have more fun than should be permissible, stumble beck out. Rinse, repeat.

Grab a Hop On Hop Off bus tour. (Or more than one.) Not limited to a walking tour (although those are available), but a guide talks one through the neighborhoods, letting one off at different locations to visit while picking one up as a later bus comes back through the neighborhood. Each neighborhood and cemetery has its own history. Tickets may be purchased for one, two, or three days.
Restaurants: Antoine’s, Cafe du Monde (casual), Mandina’s (not fine dining , but interesting), Betsy’s Pancake House (for breakfast or lunch), dozens more.
Art: along Decatur St. from the old brewery, past Jackson Square, past Cafe du Monde, through the old French Market there are lots of small shops, many displaying local artists. (Deb liked Stefano Velaska’s stuff.)
Several stores carried Voodoo items and history, pointing out that Voodoo was a gentle religion that was confused with Hoodoo, a nasty superstition that invoked harmful spells. (In one museum, we ran into a guide who had a really poor grasp of Christian history, but appeared to know Voodoo pretty well.)
We had driven to NOLA , so we took our car to a couple of plantations (Laura and St. Joseph). While some plantations were hyped as though it was a step back into Gone with the Wind, we found the guides described the issues such as slavery pretty openly and thoroughly.
Mardis Gras World was good for both history and entertainment watching the floats being built.
We also took the St. Charles Street streetcar from South Carrollton Avenue to Canal Street and back, leisurely viewing a lot of the city.

He says the secret is to tip the shucker ahead of time.

You have time for a riverboat tour. You have at least a couple of options, but the one I went on was only available Friday - Sunday, and it went down the river to the Revolutionary War Chalmette Battlefield in Jean Lafitte National Park. You’re on the boat for about 40-60 minutes, you spend about another hour at the battlefield, then you get back on the boat and go back to the city. While on the boat there’s a full bar and lots of indoor and outdoor seating. The captain will tell you fun facts and anecdotes about the city on the way there and back. Fun little trip. Buy tickets in advance.

If you’re hungry for breakfast and are near one of several “Ruby Slipper Cafes” you should go there. Best Hollandaise sauce you will ever have.

Note about Cafe du Monde: if you’ve never been to NOLA before it’s an obligatory stop, but be aware that it’s kind of gross in there. If your table and chair are sticky, that’s normal. The entire place is literally covered in powdered sugar and the only “cleaning” tables really get between customers is one of the numerous Vietnamese servers zooming around the place wipes it off once with the same damp towel he wiped off every other table with. And bring wet-wipes with you, because you DO NOT want to go into the restroom there. Trust me.

If you’re into that sort of thing, the Botanic Garden at New Orleans City Park is worth a visit. City Park itself is probably worth a visit, as there’s other stuff there too.

On Conti Street, a few doors down from Bourbon, is The Erin Rose. One of my favorite bars in the world. It’s a popular place for locals. I once sat next to a woman with a Boston Terrier. The woman was sleeping, sitting up, and the dog was asleep on her lap. I wanted to get a picture, but that would have been too whatever.

If you stop, tell the owner (Angie) that I sent you and ask her about her experiences with Katrina.

Homer has the right idea! 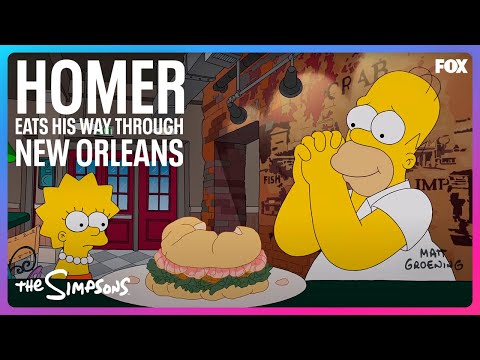 I came here to recommend this (one of us always does), along with Killer Po’ Boys located inside. Get the best po’boy in the best bar.
Alas, Angie and Troy have moved far away, but still own the bar.

I’ve been told it’s virtually impossible to have a bad meal in New Orleans, and I generally found that to be true. Maybe the shrimp po boy I had at some random fast food place on Bourbon Street my first day there wasn’t as good as it could have been, but it wasn’t bad, just not as good as the other places I ate.

I’ve been told it’s virtually impossible to have a bad meal in New Orleans, and I generally found that to be true. Maybe the shrimp po boy I had at some random fast food place on Bourbon Street my first day there wasn’t as good as it could have been, but it wasn’t bad, just not as good as the other places I ate.

My first morning in New Orleans last year, I foolishly ate from the hotel’s included breakfast. It was pretty decent, I appreciated the hot sauces they had available. However, that meant I wasn’t hungry for lunch (I seldom eat more than twice a day) when we stopped at a little spot in the Quarter that sure looked and smelled good. I sampled a few morsels from my companions’ plates, yep, I wasted a meal at the hotel. Coffee only from then on.

Crawfish etouffée. Everywhere else I’ve had it, it’s been a pale shadow of what I had at the Gumbo Shop in N.O. It was one* of the best meals I’ve ever had. That was back in 2008, though.

*Two of the best meals, actually - went back a night or two later and had the crawfish etouffée a second time, and it was every bit as good.

I’ll second the Spotted Cat and any other place around it with live music. Its a whole different vibe than Bourbon St. I also agree on the Erin Rose. A swamp airboat tour should be on your list. Its 45 minute drive over the river to Lafitte to one we went on but totally worth it. They have shuttles. I haven’t been to NO in several years but look forward to going back.