Inspired by the shortages thread in QZ.

I have new indoor lights in the basement utilty room that are incredibly bright. I wonder if this is an opportunity. Can I grow lettuce down there? Tomatoes? Any advice?

These are ceiling lights, correct? If so, they’d be too far away from your seed/baby plants unless you put them up on a very high shelf, and they may not have the correct spectrum of light:

I use an Aerogarden to grow stuff indoors and the lights are never more than about 4 inches above the top of the plants.

A key issue in addition to lighting is what temps are in the basement. 60-65F during the day with about a 5 degree drop at night would be ideal for lettuce, less so for tomatoes. Maybe 10 hrs. of light per day would likely be fine. Suitably bright LED fixtures (there are many options; I’m not convinced “grow lights” are significantly superior to ordinary LED shop lights, especially for vegetative growth) should be OK for leafy crops like lettuce. Tomatoes will be tougher to manage and get a decent crop from, though you might try compact varieties bred for container growth.

The only edible stuff I have under lights are two kinds of basil (B. herbalea “Wild Magic” performs well), which grow in an upstairs bedroom under LED fixtures.

For anything from which you want vegetative growth only, you don’t need special spectrum lights. You do need to be able to get the lights close to the top of the plants, and to adjust them as needed as the plants grow – hang either the lights or the plant shelves from chains by hooks through the links, so you can move them to a different link. Or you can buy light stands meant for the purpose; though, if you have cats, I’d avoid the type that holds the lights up by a sort of friction clamp/turn knob instead of by chains. IME a cat will land on top of the light fixtures while the plants are small and there’s room on top, and those things don’t hold well enough to keep them up.

10 hours a day is a minimum. Most plants want 12 to 16. Note that many plants also need darkness – don’t just leave the lights on 24/7. A timer is your friend. Some things need different day lengths at different growth stages, but I wouldn’t worry about it with tomatoes and lettuce; in vegetables that’s mostly alliums.

Most plants will produce something under a wider temperature range than the recommended; just not as fast, or as much. They do have maximums and minimums – most things mustn’t freeze, some won’t do well in the 40’s (all temps F) or won’t set fruit in the 90’s – but those are wider range than the ideal ranges. Temperatures needed for germination may vary from those needed for growth. Many seed catalogs give decent guides, and there are also lots of books, and online references.

Tomatoes need more soil depth than lettuce; and for tomatoes also you want fruit, not just leaves. You’ll need bigger pots, and better lights. (You need better lights for most things that you want fruit from, that isn’t just tomatoes.) Some varieties will do better in pots than others, and some will work in smaller pots than others – especially for what you’re describing, I’d get something recommended for container culture.

Tomatoes like to be repotted – a lot of things don’t – so start them in small containers, which are easier to deal with at that stage, and move them to the larger ones when they’ve filled the rootball space in the little ones. Plant them deep when you move them, up to the bottom leaves; they’ll grow more roots on that extra stem. As they grow taller, remove the lowest leaves so they won’t be hanging into the potting soil. Some people prune them a lot more than that.

That business about fans on tomatoes that you mentioned in the other thread has to do with keeping the stems from being too spindly. If you want sturdy stems, they need to move around some as they’re growing. You don’t need a fan, you can just brush them gently back and forth with your hand a few times every day or two.

Google growing in containers, or container culture, or something like that; there’s lots of good info out there.

– oh yes, if you’re germinating something that needs heat, don’t heat the whole basement. Get a heat mat.

Not hard, although I’d recommend actual “grow lights” and not just bright regular lights. I’ve done hydroponics a couple times and lettuce was one of the easier crops to grow (and no, I did not grow marijuana, just vegetables). No reason you can’t use old fashioned soil for growing, it’s definitely less complicated in some ways. Stuff grown indoors in still air tends to be less robust than outdoor crops, to counter that get an oscillating fan to generate a breeze, too. Especially if you do something like tomatoes, otherwise the stems won’t be strong enough to hold the plant up when it starts setting fruit.

And by “old fashioned soil” I mean “not hydroponics” or airponics or aquaponics. However, soil used indoors has different requirements than outdoor soil. I’m sure there are folks better qualified than me to guide you there, as most of my indoor gardening success has been with hydroponics.

I am a big fan of using timers for lights. That way you won’t forget and either leave them on or off. Then again, I set up my last indoor garden to run largely on its own, only looking in on it about 1-2 times per week.

If you live in Kansas, think twice (and then three times and then four times) about indoor gardening. 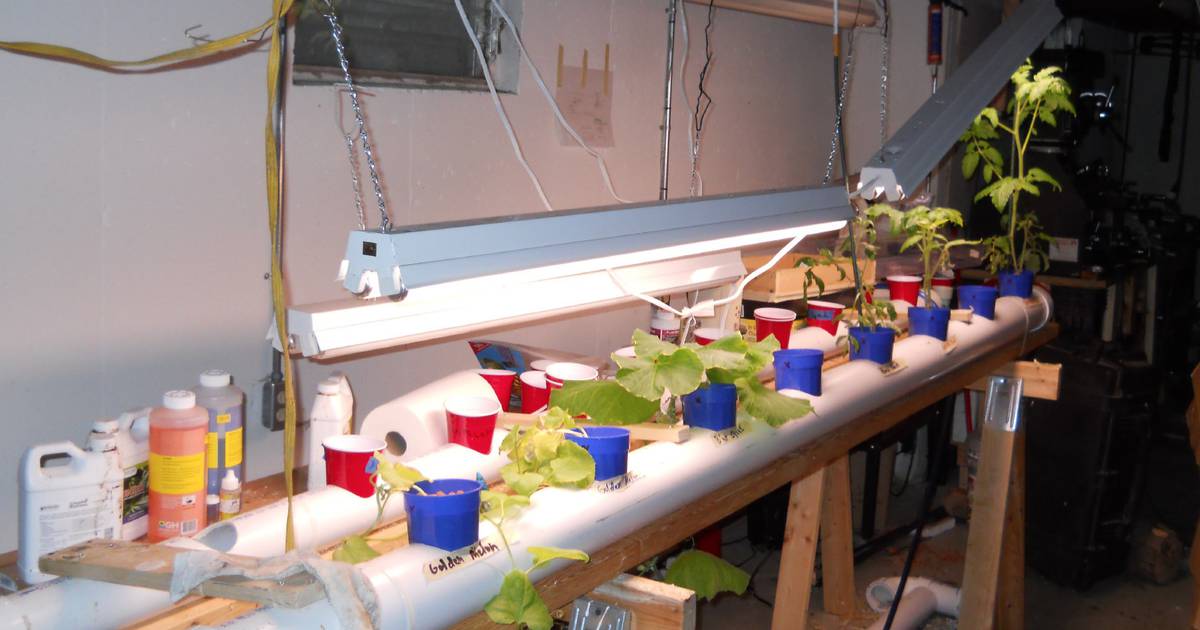 'We'll never be the same': A hydroponic tomato garden led police to raid...

The police report would claim it all kicked off at 7:38 a.m., but Bob Harte later thought it had to be earlier.

Yeah, my landlord contacted our local sheriff department to let them know what we were doing. We did have neighbors call the cops and claim we had a grow operation twice. The deputies showed up, we showed them the indoor garden, and that was that.

Then again, as one cop mentioned, our utility bills didn’t match that of a grow operation (typically 4-5 times or more the cost of any other building that same size). And they didn’t bust down the door with guns drawn. It helps when you have some sanity in the local police.

does it work? - mostly yes

is it worth the resources invested? - mostly no

Here’s what I made. Works really well.

The light fixture is a 4 foot shop light with reflector, integral power cord, and pull chain. The light can accommodate four, 4 foot (48 inch), T8 fluorescent light bulbs. Each bulb is 32 W (F32T8). Two of the bulbs have a color temperature of 3000 K, two have a color temperature of 6500 K, and I stagger them when I install them. The light hangs from an expandable garment rack using a couple chains. This is really convenient; I can easily raise the height of the bulbs as the plants grow. The two metal shelves have dimensions of 24″ width, 14″ depth, and 30″ height. Plywood rests atop the shelves, and the plants are placed on the plywood. The plywood (or OSB) has a thickness of 23/32″ with dimensions 15.5″ X 46.25″. I also put a wood rim around the perimeter of the plywood using 1.5″ X 0.75″ wood. I then sealed the inside corners with caulk and painted it. That way, it will hold water. 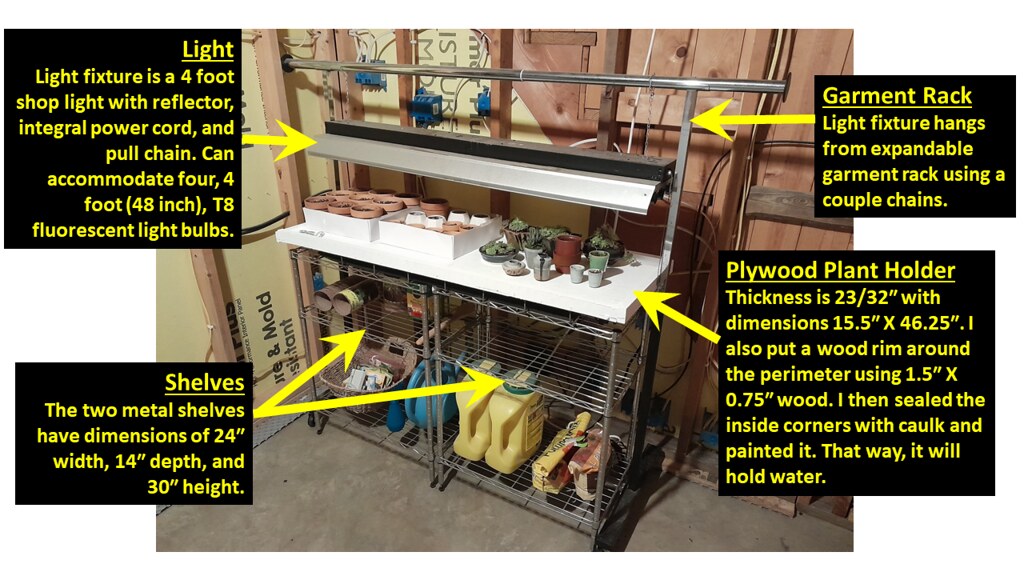 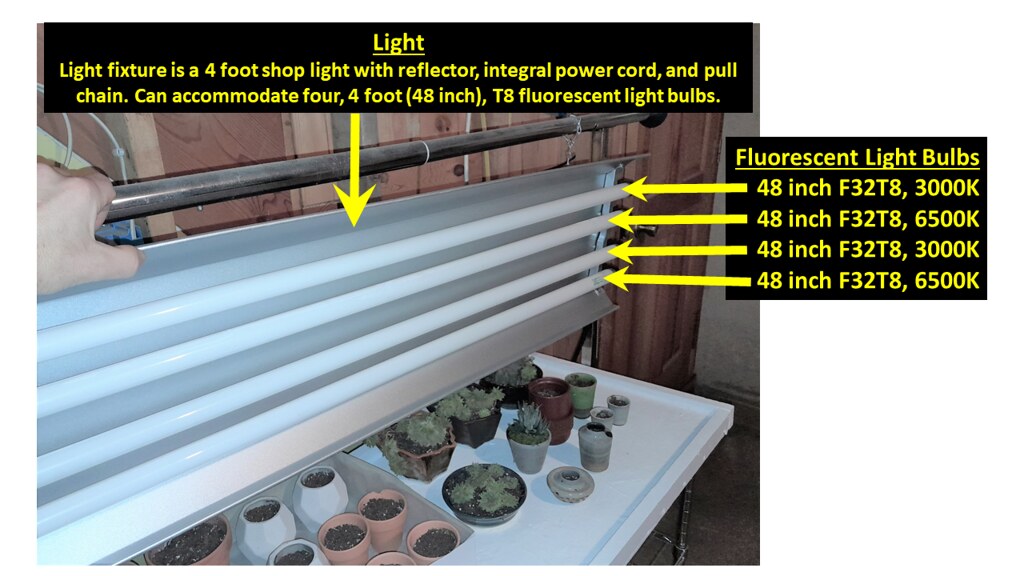